The arrival of the United Kingdom-based Energean, an oil and gas exploration company, which will begin a drilling operation close to a disputed maritime zone in the eastern Mediterranean, has sparked tensions once more between Israel and Lebanon, compelling a US envoy to return to the region on June 13 to mediate.

Energean Power, a floating storage and production vessel, and the Arendal Spirit platform, have begun exploratory drilling in the Karish field in Israel’s northern territorial waters a mere two miles south of a line Lebanon has considered claiming as its southern maritime border with Israel. The vessels haven’t yet strayed across the maritime boundary, known in Lebanon as ‘Line 29,’ according to data supplied by www.marinetracker.com. But oil and gas fields don’t respect man-made boundaries, which means that when or if production begins in an estimated two to three months, Lebanon potentially stands to lose what Israel gains from the Karish field, which straddles Line 29.

Lebanon quickly asked for urgent US mediation to resolve the spat while Lebanese Hezbollah is watching intently from the wings. Hezbollah has threatened to resort to force if necessary to protect what it says are Lebanon’s fossil fuel rights, but it has also appointed a party official to oversee the file in discussions with the Lebanese government.

For now, Lebanon and Israel appear eager to seek a negotiated solution and, despite Hezbollah’s saber-rattling, the party has little incentive to engage Israel in a fresh shooting war.

The current dispute has been in the making for fifteen years. In 2007, Lebanon and Cyprus delineated a boundary consisting of six coordinates between their mutual Exclusive Economic Zones (EEZs). The agreement between the two countries allowed for the two points at both ends of the line to be readjusted according to Lebanon’s future maritime boundary agreements with Syria in the north and Israel in the south.

The discovery of two large gas fields off the coast of northern Israel in the following three years, and estimates by the US Geological Survey that the Levantine basin could hold as much as 1.7 billion barrels of recoverable oil and 34.5 trillion cubic meters of gas, put the spotlight on this stretch of the eastern Mediterranean. Israel quickly carved out some of its northern coastal waters into oil and gas exploration blocks. Significantly, the edges of the most northerly blocks ran at an angle that appeared to be a logical assessment of where a future Lebanon-Israel sea border could lie. The line also conformed to a row of buoys the Israeli navy had unilaterally laid off the coast years earlier, representing a perimeter that Lebanon-based vessels could not cross.

In October 2010, Lebanon submitted to the United Nations (UN) its claim for a southern maritime boundary with Israel. Running from Ras Naqoura, which marks the coastal land border between Lebanon and Israel, the line terminated at Point 23—some 133 kilometers out to sea—at an angle that almost exactly followed the edges of the Israeli exploration blocks. It suggested that both countries were in unspoken de facto agreement on the path of their mutual maritime border. But, eight months later, Israel filed its version of the northern maritime boundary, using the first point of the Lebanon-Cyprus EEZ boundary agreement as its northerly starting point. The first point lay some seventeen kilometers northeast of Point 23, therefore, the Israeli claim resulted in a thin triangle of disputed waters of some 860 square kilometers.

In 2012, US mediator Frederic C. Hof, an expert on the borders of the Levant, proposed a midway solution to the rival Israeli and Lebanese claims. The Hof line allocated 55 percent of the 860 square kilometers disputed zone to Lebanon and the remaining 45 percent to Israel. Lebanon turned up its nose at the offer.

Sporadic negotiations waxed and waned over the years with no result. Then, in late 2020, Lebanon offered a new interpretation of its maritime boundary. This one cut far to the south of Line 23, adding another 1,430 square kilometers to the Lebanese claim. The new Line 29 retained all the Qana gas field inside Lebanese waters and half of the Karish gas field that Energean was preparing to exploit. Israel rejected Lebanon’s “maximalist claim” and said that it will only negotiate the 860 square kilometer pocket. The US mediation, currently headed by Amos Hochstein, the Joe Biden administration’s energy envoy, also has balked at beginning negotiations anew based on Line 29.

The latest pitch by Hochstein in February suggested some form of resource swap, in which both countries benefit from the undersea oil and gas wealth. Hochstein reportedly informed his Lebanese and Israeli interlocutors that he was setting the Lebanese parliamentary elections—held on May 15—as the deadline for an agreement to be reached. If, by that date, both sides were still in disagreement, Hochstein would wash his hands of the whole affair. The deadline, of course, has expired and Hochstein returned to Lebanon on June 13 to hold talks with top Lebanese leaders to find a way to move the impasse forward.

Proponents of the new Lebanese claim for Line 29 argue that it was delineated based on solid legal and cartographic grounds by ignoring a rocky outcrop, Tekhelet Islet, lying one kilometer off the coast of northern Israel, as a point of equidistance to form the boundary. Past proposals used Tekhelet in drawing up a line that swung the boundary to the north, to the detriment of Lebanon. Lebanon claims it is impermissible to use an unpopulated rock to determine an international maritime boundary.

However, irrespective of the cartographic merits of such a claim, politically, Lebanon did itself no favors by issuing a new boundary proposal more than a decade after submitting the original Line 23 proposal. Line 29 was delineated by specialists with the Lebanese Armed Forces based on cartographic principles, but it is Lebanon’s leaders that have had to carefully mull the political ramifications of accepting the amended line. Technically, Lebanon should formally ratify an amendment to Decree 6433 enshrining Line 29 as its maritime boundary with Israel and then submit it to the UN, as it did for the earlier Line 23 boundary in 2010. If Lebanon was to take such a step, it would compel, under international law, Energean to break off its exploration activities until the dispute is resolved.

A number of Lebanese politicians have called on President Michel Aoun, an initial proponent of Line 29, to amend Decree 6433 and approve the line as Lebanon’s official claim. Interestingly, among the vocal proponents of the amendment are some civil society opposition who won parliamentary seats during the May elections and now appear eager to boost their nationalist credentials. They even held a rally on June 12 in the southern border village of Naqoura to demand adherence to Line 29 and pressed their case directly to Hochstein on June 14.

However, Lebanon’s veteran political leaders, namely Aoun, acting Prime Minister Najib Mikati, and Parliamentary Speaker Nabih Berri, appear to be adopting a more cautionary stance, perhaps understanding better than the new parliamentary arrivals the potential ramifications of approving Line 29. If Line 29 was formally adopted, the US almost certainly would drop its mediation efforts, leaving the dispute in stasis with no resolution on the horizon. In such a case, Israel may not be able to exploit the Karish field for the time being, but it has several other gas and oil deposits to pursue further south. Lebanon would be the economic loser, with the southern tranche of its potential oil and gas deposits lying undisturbed in the Mediterranean Seabed—so long as the stalemate persists.

Given the unpalatable consequences of adopting Line 29, Lebanon appears to be moving closer to an internal agreement on continuing negotiations based on an amended Line 23, which, according to one Lebanese report, would include an additional eighty square kilometers and the Qana field. The move could be spun by Beirut to its American interlocutor as a magnanimous and pragmatic gesture in contrast to a rigid—but ultimately self-defeating—adherence to Line 29.

Hezbollah has been following developments closely, but so far is leaving it to the Lebanese government to chart a course of action. It has appointed Nawaf Mussawi, a Hezbollah former parliamentarian, to handle negotiations with other political leaders, suggesting it seeks a consensual approach. Nevertheless, ever eager to maintain the balance of deterrence with its arch-enemy, Sheikh Hassan Nasrallah, Hezbollah’s secretary-general, said on June 9 that the party would not stand idle “before the looting of Lebanon’s wealth.” “The Resistance has the technical ability to prevent the enemy from extracting gas from Karish and I will not say how,” he warned.

Still, Hezbollah has no interest in going to war over the maritime dispute any more than Israel does, and it will likely bide its time to await developments before opting for action. There are few options available to Hezbollah that would allow it to flex its martial capabilities without triggering an unwanted escalation. One possibility is to deploy unmanned aerial vehicles (UAVs) to the location of the exploratory drilling to circle and film the vessels. If Hezbollah chooses to be more confrontational, it could theoretically launch missile-firing or “kamikaze” combat UAVs from Syrian territory—for deniability purposes—to attack the drilling platform. Similarly, Hezbollah possesses anti-ship missiles (ASMs), although the number and variety are unknown.

The only known system in Hezbollah’s arsenal is Iran’s Noor 2, a reverse-engineered version of the Chinese C-802 missile that Hezbollah used in the 2006 war to disable an Israeli naval vessel off the coast of Beirut. The drilling site lies some eighty-five kilometers off the coast of south Lebanon, well within the range of the Noor 2. Hezbollah may also have acquired the Russian Yakhont ASM system, a consignment of which was delivered to Syria in 2013. Israel is reportedly deploying its Iron Dome anti-missile defense system to the drilling site in anticipation of such developments.

Nevertheless, potentially lethal and destructive kinetic action by Hezbollah is highly unlikely. Instead, Lebanon will have to mull over what a better option is: endorse the Line 29 claim and risk the US abandoning its mediation efforts, leaving the dispute unsettled—an option that is growing increasingly unlikely. Or, return to Line 23 in the hope that a sufficiently face-saving, equitable deal can be hammered out that would, at last, allow Beirut to begin tapping the desperately-needed fossil fuel reserves lying beneath its coastal waters. 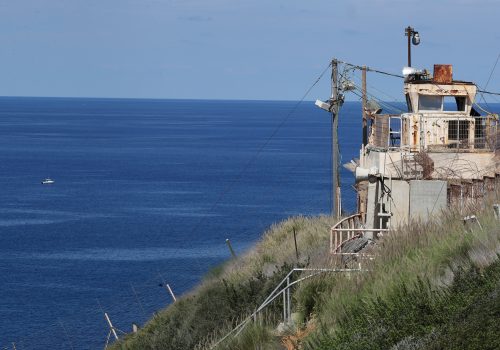 After a decade of United States-led mediation, on October 14, delegations on behalf of Israel and Lebanon entered negotiations on the demarcation of their disputed maritime borderline. 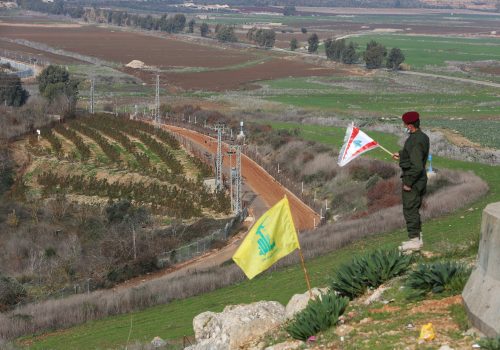 On August 5, an Israeli airstrike in south Lebanon—targeting an open area from which rockets had been launched at Israel by unidentified militants in the third such incident since May 19—prompted Hezbollah’s rocket attack. 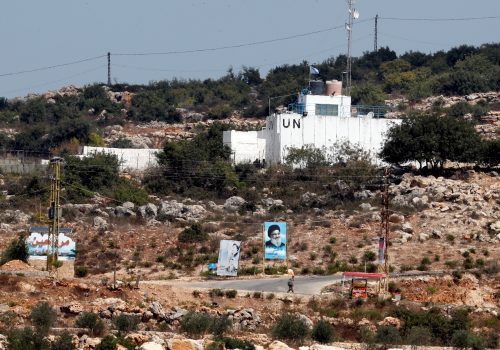 Hezbollah is using propaganda to cover its deterrence deficit with Israel

Hezbollah won’t necessarily suspend all operations against its archenemy, but it will have to deftly navigate both Lebanon’s predicaments and its support base’s expectations.

Image: Demonstrators carry flags during a protest against Israeli gas extraction from a maritime field that Lebanon says falls in disputed waters, but which Israel says is part of its exclusive economic zone, in Naqoura, near the Lebanese-Israeli border, southern Lebanon, June 11, 2022. REUTERS/Aziz Taher