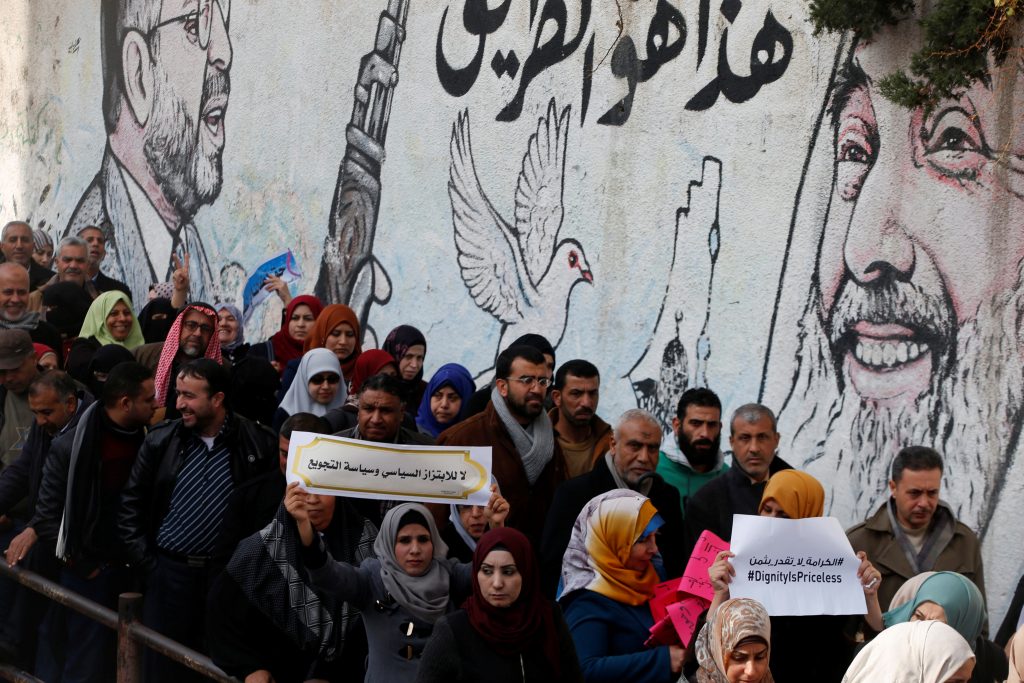 At a time when US-Israel relations are arguably closer than at any point in history, US-Palestinian relations have reached a nadir. The two sides have not met since the US administration recognized Jerusalem as Israel’s capital in December 2017, and tensions have been inflamed as the US administration continues to embrace the positions of Israel’s right-wing government—including the recent determination that West Bank settlements are not illegal.

Among the most troubling of measures, however, has been the suspension of America’s historic aid to the Palestinians. No matter how far down the road, if a US negotiated two-state solution is ever to be feasible, the Palestinian people will need America’s tangible support. Congress took a notable step this past week to try to revive some of that critical assistance—but far more will need to be done.

Historically, the US has been the largest donor to the Palestinians, though its support has not been without controversy or disappointments. While the funding failed to deliver the peace it initially sought, it has still benefitted all parties. With the help of US dollars, the Palestinians were able to build the initial trappings of a state, including a stable, if deeply flawed government and ultimately, critical infrastructure. Aid supported programs brought the two sides together and strengthened moderate voices in the face of ever-growing pressure from extremists.

Palestinian security assistance improved Israel’s security; security cooperation minimized the need for Israeli intervention and helped avert security crises that could drive Israeli redeployment. The support has also mitigated humanitarian crises—addressing basic needs like food, water, and health; which could exacerbate instability. For all its flaws, the United Nations Relief Agency (UNRWA) utilized significant US funding to provide critical education and social services that could otherwise have fallen to Israel. The funding also ensured US influence and leverage over the Palestinians—now absent.

Despite its utility, funding to the Palestinians has decreased annually since 2012, and under the current US administration, had ceased all together. The decline has been compounding—and with little tumult in Washington. In 2018, as part of a larger spending bill, Congress passed the Taylor Force Act. The bill barred support that directly benefitted the Palestinian Authority, but allocated funds for key initiatives that bypassed them, including pro-peace efforts and support for East Jerusalem hospitals.

In the months that followed, the US administration—which acknowledged the importance of Palestinian support in its so-called Peace to Prosperity Plan—rejected the funds, ostensibly in an attempt to coerce the Palestinians to embrace their approach to peace talks. They re-appropriated more than $225 million in FY17 funding—including $25 million allocated for East Jerusalem hospitals, ended all funding for Palestinian peace programs, and withheld America’s $300 million annual contribution to UNRWA.

The Anti-Terrorism Clarification Act (ATCA)—a well-intended effort to secure justice in US courts for American victims of terror—passed in October 2018 and was the nail in the coffin. Accepting US foreign aid established jurisdiction for victims of Palestinian terror to redress their claims in American courts—and so the Palestinians simply refused the money. In February of 2019, all US assistance—including security assistance, came to an abrupt halt. Everyone lost out: victims were denied justice, the Palestinian people denied aid, and US interests in both respects were undermined.

The impact of the aid cuts in this short period has been considerable, and in some cases the damage may be irreversible. Vast programs were shut down; infrastructure projects—including water and roads—were left incomplete or laid to waste at taxpayers’ expense. Vital food assistance, health programs, and sanitation that the Palestinians people, particularly those imperiled in Gaza, have come to rely on for their most basic needs, lost funding. It has cost the US leverage among the Palestinian leadership and with UNRWA—institutions they claim to want to reform.

It has cost the US leverage among the Palestinian leadership and with UNRWA—institutions they claim to want to reform.

The closures also sent reverberations through already fragile and shrinking pro-peace and pro-Western constituencies. As US funded—and heavily vetted—programs disappear, the Palestinian terrorist group Hamas fills the void by delivering those critical services instead. This in turn created an opportunity for Hamas’ backers, including Qatar and Iran—who offer financial relief in exchange for influence—to fill the vacuum created by America’s departure.

On December 16, Democrats and Republicans in Congress came together to try to remedy the situation, allocating $150 million in funding, divided evenly between security assistance programs, humanitarian, and economic assistance, or ESF funds. The bill also carves out $30 million for the cross-border peace programs the US administration had cut off. Perhaps most importantly, after a year of negotiations, Congress changed the provisions of ATCA to link jurisdiction to the same terms as the Taylor Force Act—activating jurisdiction on the basis of payments to terrorists or their families who have killed American citizens—and in the process, paved the way for funding to go back online.

While these measures are important, funding remains significantly below previous levels—but that is assuming money, old or new, is spent at all. During a speech to the Israeli American Council earlier this month; US President Donald Trump boasted about his strategy of denying aid, insisting that withholding money is the best way to negotiate with the Palestinians. The PA’s continued refusal to engage the US administration and its peace efforts are likely to inflame the situation further. And Congress’s decision to exclude the US administration’s request for $175 million for their peace plan—which sent a strong rebuke to President Trump’s approach—likely won’t court goodwill either.

Champions of a two-state solution—of which a majority of Americans support—also prioritize Palestinians becoming equal citizens. Members of Congress must work to increase assistance levels and more importantly, to hold the administration accountable for spending the money it’s been given—bipartisan resistance and threats of legal action have together proven potent, and language that restricts the Administration from diverting future funds is critical.

At the same time, US Democratic presidential candidates must make clear that they will advocate for rights—and assistance—on both sides of the border. Ultimately, if the United States intends to pursue a serious strategy geared towards advancing progress between the parties, it cannot abandon either in the process. And while peace is unlikely to materialize in the short term, it will never be possible without a healthy, strong, resilient Palestinian society. Of course, the Palestinians themselves, will have to do plenty of hard work on their part if they hope to see their vision of statehood realized. The US needs to reinvestment financially and diplomatically in Palestine and Israel now before the damage is irreversible and US leverage is gone.

Carmiel Arbit is cofounder of Key Bridge Strategies and a Truman National Security Fellow. She researches and writes on US-Israel relations and has consulted for NGOs around the world, including in Israel and the Palestinian Territories.

The folly of the Trump administration’s proclamations on Israel

ently the White House and the Department of State released statements: one proclaiming American recognition of Israel’s sovereignty over the Golan Heights; and the other commemorating the fortieth anniversary of the Israel-Egypt treaty of peace. Each, in its own way, revealed serious leadership dysfunction.

Image: A Palestinian employee of United Nations Relief and Works Agency (UNRWA) holds a sign that reads, " no for political blackmail and starvation policy" during a protest against a U.S. decision to cut aid, in Gaza City January 29, 2018. REUTERS/Mohammed Salem