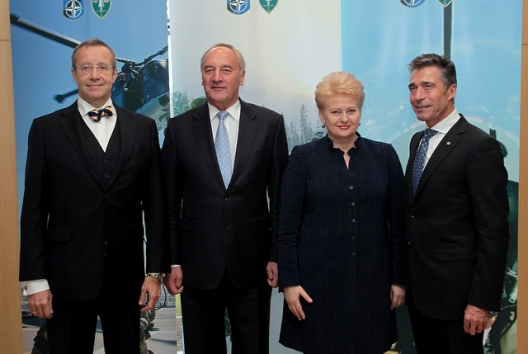 For the Baltic countries Estonia, Latvia, and Lithuania, the 2014 NATO Wales Summit marks a pivotal moment in the history of the Alliance. It is against the backdrop of Russia’s annexation of Crimea and the political, economic and military pressures Russia continues to apply against Ukraine that the Alliance will need to rebalance the core elements of its strategy – collective defense, crisis management and cooperative security – to meet the future security concerns of all of its member states.

Like the boy who cried wolf, the Baltic countries have time and again warned about a Moscow that has over the past decade chosen to become a radical, revisionist power; yet, it is only now that their calls are being heard. None of the Baltic countries wish to return to the Cold War, but on the other hand they all are approaching the Wales Summit convinced that the Alliance should firmly revalidate the utility of collective defense in order to reassure potentially vulnerable members like themselves and to deter against any military threats against the Alliance.

The Baltic countries are arguing that NATO must send a strong signal about its determination to honor its Article 5 commitment. What has been done so far is encouraging, but it is not enough. Beefing up of NATO’s air-policing, deploying U.S. troops until the end of 2014, and arranging more exercises covering the Baltic countries and Poland represent steps in the right direction, but more could and should be done.

The new concrete measures should include if not a “permanent” then at least a “continuous” presence of Allied troops on Baltic soil, as well as the prepositioning of heavy military equipment, oil and lubricants. Furthermore, a new schedule of more robust exercises (air, sea, and land) adapted to the changed security environment should be adopted. As far as the presence of Allied troops in the Baltic countries is concerned, for political reasons it would be useful to have troops on the ground not only from the United States, which is a sine qua non, but also from the major European Allies, including Germany.

All of this would translate into higher readiness to support NATO’s front-line states, should they be threatened. A special “readiness action plan” should also be designed around the NATO Response Force (NRF) to make the NRF even more flexible and deployable than it is today. Furthermore, the Alliance’s intelligence and early warning assets should be modernized.

Baltic defense planners are well aware of the danger of focusing predominantly on collective defense. Therefore, they present these Article 5 military capabilities as part of a balanced package of tools and instruments that NATO must have at its disposal, and emphasize that the Alliance will have to strengthen these capabilities through such initiatives as Smart Defense, Connective Forces Initiative, and the proposed Readiness Action Plan.

At the same time the Alliance must also be prepared to respond to such emerging challenges as threats against security of supply, cyber-attacks, energy security, or information warfare. In particular, it will have to be able to find answers to the deployment of the “little green men,” or to the hybrid ways of waging warlike activities against NATO members and partners.

None of this will come on the cheap. At this moment, just three NATO member countries – the United States, Greece and Estonia – have reached the recommended 2 percent GNP level of defense spending, while the UK is very close to that target. Estonia, in particular, would like to see the 2 percent level spending recommendation included in a public document upheld by the heads of state meeting at the Wales Summit. At the same time, an internal alliance-wide discussion over the criteria on defense spending should be initiated: NATO should not only debate about how much should be spent but also to what purposes. Also, it is understood in the Baltic countries that for reasons of transatlantic solidarity, the Europeans must do more, and do more together.

It is believed in the Baltic capitals that NATO will need to retain its crisis management capabilities, although Afghanistan is being wound down with no similar operation in sight. Working together at ISAF has provided an enormous boost for creating interoperability, both within NATO and between NATO and its partners, and a serious effort should be undertaken to maintain interoperability through robust and realistic exercises.

In the Alliance at large, there is no stomach for further enlargement, although the Baltic countries would like to see countries such as Georgia rewarded for doing essentially all they have been asked, while also participating in NATO crisis management operations, including Afghanistan. There is support in the Baltic capitals for a special “Gold Card” treatment for certain partners like Sweden and Finland whose militaries are interoperable with NATO and who have regularly participated in NATO-led operations, although there is some hesitation to fully endorse a separate status for such countries lest they lose all motivation for seeking full membership.

The Russian operations in and around Ukraine have brought to light differences within NATO on how to read Russian behavior and react to Russian moves. These fissures, visible not only along a North-South axis but even among Central-Eastern members, are real and should be repaired. Therefore, a Transatlantic Declaration demonstrating resolve, unity, and solidarity will be welcomed in the Baltic capitals. Perhaps a new “Harmel report” solidifying the Alliance views might be in order.

For the Baltic countries, the Wales Summit offers a chance to reinstate the core purpose of the Alliance. Russia’s annexation of Crimea and its pressuring of Ukraine is a powerful reminder that NATO’s fundamental mission of collective defense remains valid. In Tallinn, Riga and Vilnius, the upcoming summit is seen as a golden opportunity to reaffirm the Alliance’s relevance in a changing security environment.

Dr. Järvenpää is a senior research fellow at the International Center for Defense Studies (ICDS) and former Finnish ambassador to Afghanistan.