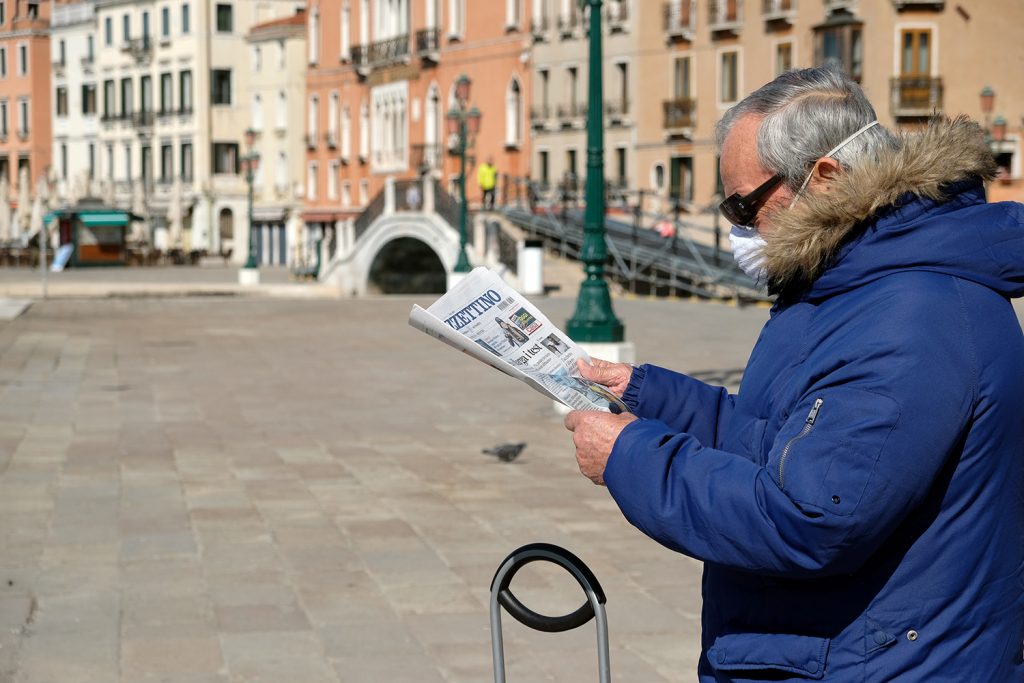 As the novel coronavirus (COVID-19) continues to spread around the globe, the World Health Organization (WHO) has outlined a different type of outbreak to be concerned about. As information on the virus deluges traditional and social media, the WHO warns that societies around the world are facing an “infodemic”—an “overabundance” of information that makes it difficult for people to identify truthful and trustworthy sources from false or misleading ones.

The sheer amount of information on the outbreak means that government and business leaders need to take specific actions to ensure that their citizens and employees receive important credible information. In a report on public trust with fieldwork over March 6 – March 10, Edelman found that “the most trusted institution in the world today is [an individual’s] employer,” according to the firm’s CEO and Atlantic Council Vice Chair Richard Edelman, noting that individual employers scored “thirteen points higher than media and five points higher than government.”

Edelman also noted that “scientists” and other experts are the “most trusted” individual source of information, making it critical that governments and employers cite these officials in their communications. Edelman stressed that respondents want employers “to be communicating at least daily if not twice a day,” not just on the specifics of the outbreak but also “about what is going on at the company.” Lisa Ross, Edelman’s US chief operating officer and president of Edelman’s DC office, argued that “employers have an extraordinary responsibility to show confidence,” during this emergency in order to reassure employees and their larger communities. Workers “are worried about the economy and about their jobs,” and businesses need to demonstrate that “it is not business as usual, but it is business,” she said. “We have a fiduciary [and a] moral responsibility to keep business going as much as we can.”

Atlantic Council Distinguished Fellow and former US homeland security advisor Thomas P. Bossert said that business leaders and government officials should always “tell people what you know. You should avoid telling them what you don’t know. And in that category, you should acknowledge uncertainty.” He suggested taking a page from how law enforcement handles information reporting, where officials “only say what [they know],” and “if [they] don’t know will tell you why [they] don’t.” He also stressed that leaders “not make fun of people’s fears” and “not make fun of the people who are skeptical,” as many in the public are still learning about the different intervention measures and their effectiveness. Most importantly, he argued, leaders need to prove that they have everyone’s best interest in mind. “People don’t care what you know until they know that you care,” he argued.

While businesses and experts are the most trusted sources right now, Edelman also cautioned that most people are still getting their information primarily from media organizations and from social media. Sara Fischer, a media reporter for Axios, reported that media companies are seeing increased traffic and demand for “strong data visualizations,” about the outbreak as they provide a dynamic way to consume raw facts about the crisis, which is where “people really trust news organizations.” Fischer acknowledged that trust in traditional media has fallen over the past few years and concerns about potential biases among individual reporters means that “now is the time when news organizations need to bring authority of the organization above the authority of the journalist.” She cautioned that there is one exception to this “if you have really strong subject matter experts within your walls,” who can speak with an authoritative voice.

According to Edelman, his firm’s report showed that the percentages of those who trust in the information they see on social media is down into the “low twenties in Western developed markets,” adding that one-third of respondents say that “anything they see on social media they immediately discount.” Despite these figures, Edelman’s report still has 56 percent of people eighteen to thirty still turn to social media the most for information. Fischer explained that this shows that these young people “are turning to their own friends and families” for guidance, but also places more responsibility on these platforms to limit the spread of misinformation and disinformation. Social media platforms, she argued, should “make a conscious effort to change their algorithms to elevate more trusted brands,” such as government agencies, local health authorities, and traditional media. Twitter has already implemented some of these changes, Brookie mentioned, as it now pushes content from the US Centers of Disease Control to all users who search for coronavirus content on the platform.

Image: A man reading the newspaper is seen in Venice on Sunday with an unprecedented lockdown across of all Italy imposed to slow the outbreak of coronavirus, in Venice, Italy, March 15, 2020. REUTERS/Manuel Silvestri