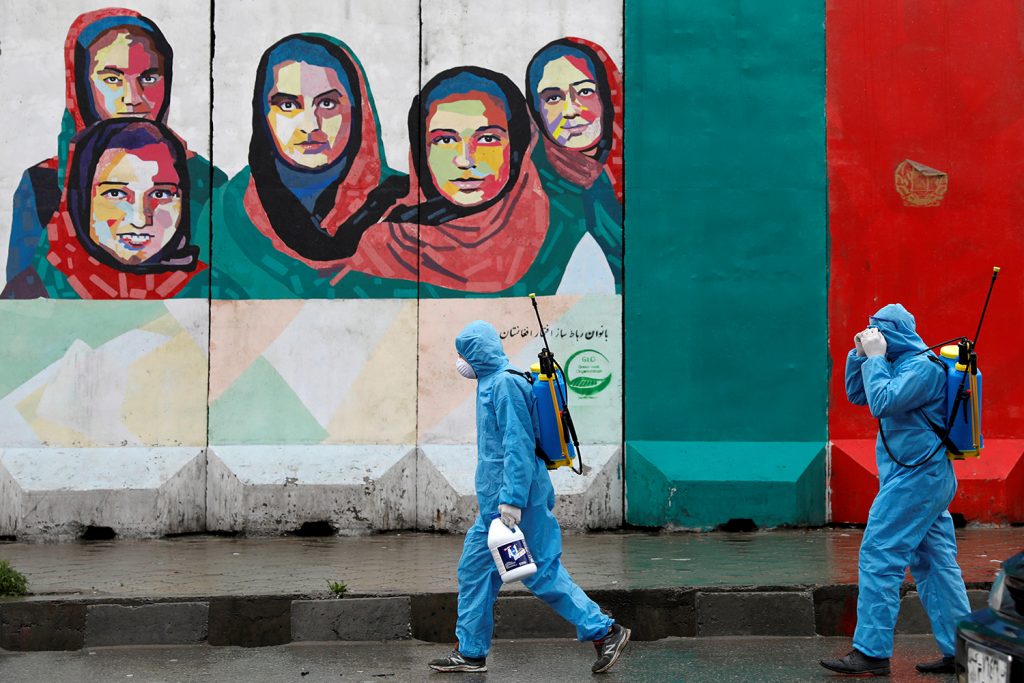 For countries dealing with the innumerable consequences of war and underdevelopment, the global coronavirus (COVID-19) pandemic presents a new threat to already at-risk populations. How can a country deal with the cost of war and a global public health crisis at the same time? The simple answer is: they can’t. Anticipating that this will be a significant humanitarian crisis, the United Nations secretary general called for a global ceasefire last month and the UN Security Council is considering a resolution to endorse it.

The COVID-19 pandemic is crippling some of the wealthiest countries in the world. Italy, the United Kingdom, and the United States, all of which have state-of-the-art public health services, have experienced soaring death rates. Already, 48,000 Americans have died as a result of the virus, more than the country’s toll in the Vietnam War. For Afghanistan, one of the poorest countries in the world which is already dealing with the results of decades of conflict, political turmoil, widespread poverty, and an extremely weak public health system, the pandemic presents a pressing and potentially devastating set of challenges. The return of hundreds of thousands of migrant workers and refugees from Iran and Pakistan, combined with multiple already existing health crises, food insecurity, and lack of understanding about the infection, makes Afghans highly vulnerable to COVID-19.

Afghanistan is already on the path to becoming a new epicenter of this global pandemic. The country recorded its first case of COVID-19 on February 24. As of April 23, at least thirty of the country’s thirty-four provinces have confirmed cases, with thirty recorded deaths according to official government numbers. We know these numbers are likely to be much higher as a chronic lack of testing limits gathering of data and detection rates remain low.

Available data shows that the infection is spreading quickly and taking a foothold in the country, which lacks the resources to respond. Afghanistan has a single national isolation center, with a capacity of one hundred beds. Regional and provincial isolation centers that are currently operational have a total capacity of 991 beds across the entire country. For the few who have managed to get tested, results are slow. The country has only one central public health laboratory equipped to carry out diagnostic tests for COVID-19, with a maximum capacity of fifty tests per day. In late March, Afghanistan’s Health Minister Ferozuddin Feroz warned that 16 million Afghans could be infected and 110,000 could die if social-distancing was not enforced. Social distancing, however, is unlikely to be very effective in Afghanistan where several generations of families tend to live in cramped housing, and tens of thousands of people who work in the informal economy cannot afford to stay at home.

Citizens, activists, and civil society groups have mobilized to respond to the pandemic. Activists have been handing out leaflets to drivers in Kabul as part of public awareness campaigns. Others have donned protective suits and masks urging people to take precautions. But a lack of information remains widespread, and these individual and scattered efforts are insufficient to mitigate the impact of the virus. If current estimates of COVID-19 deaths in Afghanistan are correct, they are likely to far exceed the number of civilians killed as result of the ongoing conflict, which according to conservative estimates has cost 157,000 lives since 2001.

Further complicating matters, this public health crisis is unfolding against the backdrop of an unravelling peace process, a political impasse between President Ashraf Ghani and his election rival Abdullah Abdullah, and a $1 billion dollar cut in aid by the US State Department. This represents a crippling blow for a country that relies on foreign funding for 75 percent of its annual budget. It is clear that COVID-19 is also impacting the already beleaguered peace process, as external actors are already using the pandemic to pressure parties to begin intra-Afghan negotiations and reach a political settlement, while the Taliban has seen an opportunity to press their advantage.

The UN, the EU, and regional partners agree on what needs to be done to mitigate the serious risk posed by COVID-19 and have called for an immediate ceasefire and a coordinated effort by all actors, including the international community, the Afghan government, and the Taliban, to meet this immense public health challenge.

So far, the Taliban have signaled that they would allow aid and health workers to go unharmed, but only in Taliban-controlled areas. In other areas, they have sharply increased violent attacks, presumably using the opportunity provided by the pandemic to further weaken the Afghan government as it is forced to redirect its limited resources. Though they are not currently targeting US troops, between late March and early April, the Taliban carried out more than 500 attacks, killing dozens of civilians and security forces in provinces that have been hit hard by COVID-19. Increasing levels of violence have made it impossible for healthcare workers to access millions of Afghans living under Taliban rule. The group continuously targets checkpoints on the country’s roads, hampering travel and the transfer of equipment. Earlier this month, clashes between the Taliban and Afghan security forces also led to widespread power cuts, endangering patients in hospitals. On April 24, the Taliban rejected the government’s call for ceasefire for the holy month of Ramadan to allow authorities to focus on tackling the virus.

Sahar Halaimzai is the co-founder of Time4RealPeace, an organization advocating for the inclusion of all segments of Afghan society and politics in the peace process.

US cuts Afghan aid: Will it bring peace closer?

Recent weeks have seen Afghanistan politically paralyzed with both Ghani and Abdullah setting up parallel governments in Kabul, after both claimed victory in the September 2019 presidential elections. Secretary Pompeo attempted to push the Afghan government(s) towards talks with the Taliban and failed.

Image: Volunteers prepare themselves to spray disinfectants on streets and shops amid concerns about coronavirus disease (COVID-19) in Kabul, Afghanistan March 30, 2020. REUTERS/Mohammad Ismail