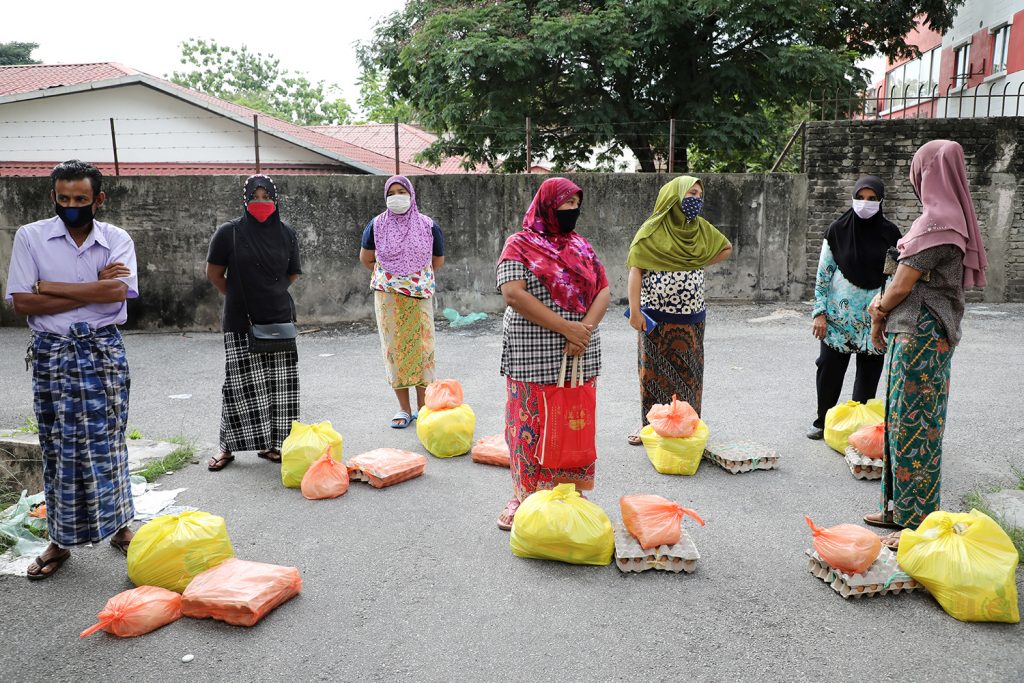 As COVID-19 dominates global policy discourse, the largest refugee camp in the world languishes in silence. In early April, the government of Bangladesh cut off Cox’s Bazar from the rest of the country, putting 1 million Rohingya under twenty-four-hour lockdown. The physical segregation followed a digital one: despite the country’s pledge to provide digital services to rural areas through Digital Bangladesh, the camps have been without internet for almost seven months.

In early 2019, the Bangladesh Rural Advancement Committee (BRAC) reported that over 168,000 refugees had no access to safe water, and more than 252,000 did not have access to functional latrines. According to the United Nations High Commissioner for Refugees (UNHCR), there are almost 40,000 people per square kilometer in Cox’s Bazar, making it forty times more crowded than the average population density of Bangladesh. All latrines are communal; the huts, made of bamboo and tarpaulin, are barely ten square meters in size. Most are overcrowded, with many housing up to twelve members of a family. These realities mean the strict social distancing measures currently in place elsewhere simply do not make sense in the camps.

For Cox’s Bazar, the pandemic could not have come at a worse time. If previous years are any indication, the impending monsoons will bring outbreaks of cholera, diphtheria, and measles. Landslides and flooding will destroy huts and cut off refugees from lifesaving supplies. The future facing the Rohingya is grim: barring urgent action in the coming months, if COVID-19 doesn’t kill thousands, other preventable causes will.

Confronted with the need for increased coordination between aid agencies and government entities, Bangladesh has instead chosen to alienate the Rohingya community even further. On April 9, citing coronavirus concerns, a government directive mandated reduction of humanitarian efforts in Teknaf, the sub-district where Cox’s Bazar is located, by 80 percent. Almost immediately aid workers reported being harassed by law police at camp checkpoints. The policy’s impact has been instantaneous: food is running out, water is running low, and essential programming to prevent gender-based violence in the camps has ground to a halt.

Speaking to me on condition of anonymity, aid workers described an environment of pervasive uncertainty. As Bangladesh reports new cases of COVID-19 each day, the Rohingya are fearful that they might be overlooked in the fight against the virus. The lack of internet access continues to hinder awareness efforts, contributing to a climate of misinformation and doubt. The early signs are alarming: earlier this week, Médecins Sans Frontières (MSF) reported a sharp reduction in the number of patients coming to clinics, with one aid worker commenting: “We have seen a decline in respiratory infection patients. When people have symptoms, they are purposely not coming to the health facilities because they are afraid that they will be taken away.”

To escape, some Rohingya are turning to traffickers. Last week, the Bangladesh Coast Guard rescued 396 refugees who had tried to sail to Malaysia only to be turned back by authorities. Speaking to me over WhatsApp, Shahabuddin, one of the survivors, shared details of nightmarish events on board. After the first week, when food started running out, traffickers started beating refugees with steel rods. Some were thrown overboard while still alive. Many, Shahabuddin says, died in his arms. When found, the trawler had already been at sea for fifty-eight days, and at least thirty-two Rohingya had died. When the rest were rescued, they were sent back, emaciated and traumatized, to the very camps they had tried to escape.

They were the lucky ones. Right now there are at least three more trawlers floating in no-man’s land between Bangladesh and Myanmar. As the pandemic cripples the country’s healthcare facilities, Bangladesh has issued an ultimatum: no more Rohingya will be allowed in. The government’s stance exploits a legal loophole: Bangladesh is not a signatory to the UN Refugee Convention, meaning it has no obligation to adhere to international guidelines set by UNHCR. In practice, the policy is a death sentence for those stuck at sea.

On social media, the issue has become a heated topic of debate. For the most part, discussants agree that the government has no moral obligation to act, especially now in the midst of a crisis. Bangladesh has done enough; other countries, they say, should step up. Conspicuously absent from discussion are the voices of the Rohingya. Shunned from the digital landscape, their voices remain suspended in ether, their lives reduced to numbers.

In Cox’s Bazar, right now, our humanity faces a crisis of choice: empathy, or indifference; solidarity or exclusion. If we choose selfishly, if we are unable to heed the call to humanitarian action, thousands will die. The virus will spread, facilities will crumble, the camps will transform into open air prisons. Forsaken to the sea, boats carrying hundreds will turn, quickly, into floating coffins.

As the Rohingya persevere on borrowed time, humanitarian agencies are seeking to build resilience from the ground up. By fostering grassroots relationships, they aim to develop community-based communications systems, support contingency planning, and empower camp residents as key points of knowledge and contact. But everything, Jessica Olney tells me, is made harder by the continued internet blockade: “Without internet, there are no means to fact check rumors. When and if an outbreak occurs, what happens then? If people need to be quarantined, how do we ensure their family members can stay in touch? In an information vacuum, how do we foster trust?”

Imrul Islam is an MA candidate for Conflict Resolution at Georgetown University, where his research focuses on minority rights in South Asia. He works for the Bridge Initiative, and is currently collaborating with the Center for Peace and Justice on capacity-building projects in the Rohingya camps.

Image: Rohingya refugees wearing protective masks keep a social distance while waiting to receive goods from volunteers, during the movement control order due to the outbreak of the coronavirus disease (COVID-19), in Kuala Lumpur, Malaysia April 7, 2020. REUTERS/Lim Huey Teng/File Photo