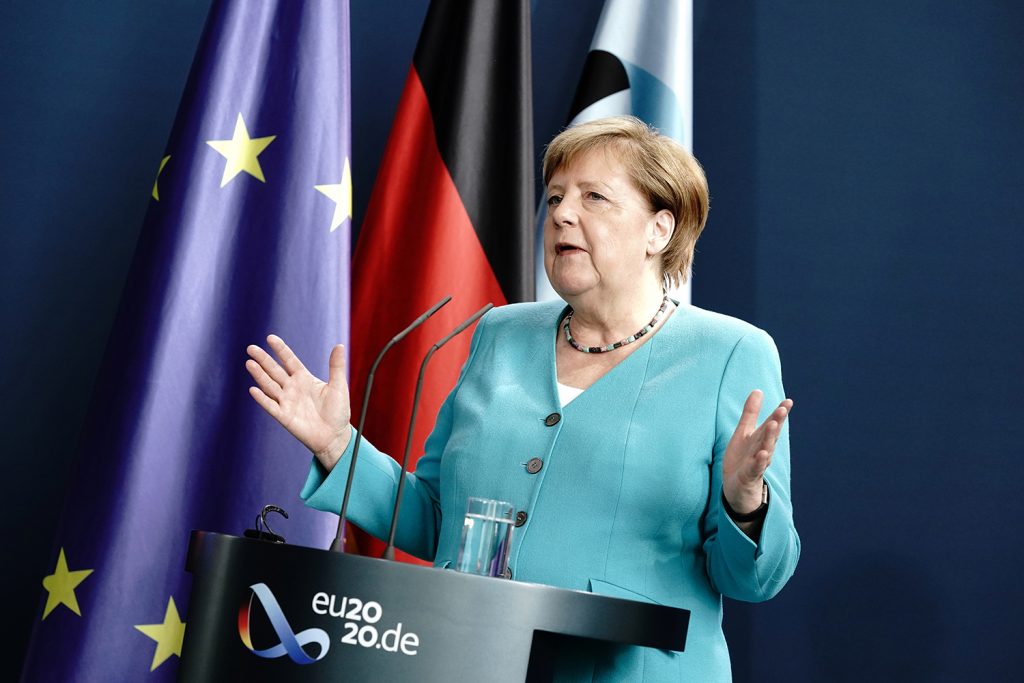 As Germany takes over the rotating presidency of the European Union (EU) this month, all eyes are on Berlin and expectations could hardly be higher. For some, the union’s largest member state is expected to do nothing short of “saving” the European project over the next six months—from the economic devastation of the COVID-19 pandemic, an increasingly menacing geopolitical environment, and from Europe’s homemade failures, fragmentation, and institutional fragility born of the last decade. With multiple challenges coming to a head, this appears to be a moment of truth for the future trajectory of the EU, Germany’s leadership within it, and the legacy of German Chancellor Angela Merkel.

However, even a cursory look at the agenda for the German presidency—much of it imposed by crisis, chance, and circumstance rather than made of Berlin’s own choosing—seems overwhelming for Germany’s reluctant conception of leadership and suggests lowering one’s expectations to avoid disappointment.

First on the docket are not one but two crucial, time-sensitive negotiations over who pays how much and who gets what, always among the EU’s most divisive questions. If the economic fallout of the COVID-19 pandemic and the centrifugal forces it could bring with it for the union are to be contained, the ‘crisis presidency’ will have to overcome deep divisions between the so-called “frugal four” (Austria, Denmark, Sweden, and the Netherlands) and hard-hit southern member states led by Italy over the modalities for a €750 billion EU recovery fund. Disagreements over the plan bleed into negotiations for the EU’s next seven-year budget deal, the Multiannual Financial Framework (MFF), into which the recovery fund is to be embedded. That similarly acrimonious fight over money and priorities is significantly behind schedule given the 2021 start of the next budget cycle and will require significant brokering skills and political capital to resolve. Berlin will have to make significant progress on both by the August summer break, given a tight legislative timeline and the economic crisis.

As if the German presidency needed an even harder end boss after these two advanced levels (to use video game parlance), Boris Johnson and the critical phase of post-Brexit negotiations await after the summer. Reports suggest next to no progress in talks to date which face a hard deadline of December 31, 2020 and no realistic hope of anyone in London contemplating an extension anytime soon. Germany will have to help keep the twenty-seven EU member states united through the bargaining with, and likely brinkmanship of, a Johnson government which has shown little concern for a no deal scenario.

In addition to this immediate crisis management, Berlin is expected to drive forward strategic EU initiatives meant to make Europe a more capable and competitive global actor. This includes integrating flagship efforts on digitalization and the EU green deal into recovery efforts; enhancing the union’s pandemic and public health toolbox; breaking through a five-year impasse on EU migration reform; and helping Europe reassert itself vis-à-vis China and others in a global environment of great power competition, made only more challenging by post-COVID uncertainty and the vacuum left by the absence of its traditional US ally.

Wind at Berlin’s back

High expectations of Germany stem from a variety of factors, even if they ignore the limits of the rotating presidency’s role under the Lisbon Treaty. Stereotypes of German efficiency apart, the EU’s largest economy accounting for nearly a fifth of its gross domestic product (GDP) and its largest population is taking over a leadership role at a critical juncture for the bloc. Germany’s governance and public health performance under the pressures of the pandemic stand out as close to a success story in Europe as COVID-19 may allow. Somewhat forgotten are Berlin’s initial decisions of export bans and border closures which drew heavy criticism from European partners. But above all perhaps are the prospects of Chancellor Angela Merkel’s crisis management at the helm of Germany’s presidency—a rare second EU presidency for a leader in an enlarged EU since her first turn in 2007—and the country’s apparent about-face on matters of EU financial solidarity.

Perhaps more than at any time since the 2015 migration crisis, Merkel exudes calm competence and control in her fifteenth year as German chancellor. Gone seem to be any hints of a lame duck chancellorship since her 2018 decision to step down as leader of her center-right Christian Democrat Union (CDU) and the announcement that she would not run again in the 2021 federal election—a commitment she has been probed about more frequently in recent months but one she keeps insisting on.

Her own handling of the crisis and an open leadership contest for her succession that has faded into the background amid the pandemic have seen her personal approval rating reach an impressive 71 percent and given the CDU’s dismal pre-crisis polling a ten-plus percentage boost to around 38 percent. Nearly two-thirds of Germans approve of the grand coalition’s work, an uneasy alliance between Merkel’s CDU, her Bavarian sister party, and the struggling Social Democrats that looked ever-more fragile even just a few months ago. So, amid a convergence of crises for the EU, Europe’s longest serving leader of the bloc’s largest economy assumes the helm, buoyed by domestic support, strong leadership in the pandemic, and legacy-building expectations abroad.

Much more stunning than the reversal of Merkel’s political fortunes amid an unprecedented crisis is the U-turn Germany appears to have made on fiscal policy. As late as early March 2020, in the face of the encroaching COVID-19 pandemic, any talk of stimulus spending and Eurobonds met with the familiar “Nein” from fiscal hawks in Berlin. A few weeks later, however, the COVID-19 pandemic seemed to have achieved what successive French presidents, coalitions of EU member states, and economic Nobel Prize laureates from Paul Krugman to Joseph Stiglitz could only dream of—get Germany and its fiscal conservatives to drop a near-religious opposition to debt and deficits and adopt the largest rescue package in its postwar history. Within a few weeks, the country best known from Athens to Rome for its finger-wagging ordo-liberalism seemed to have turned Keynesian. With opposition support and overwhelming public approval, the German government adopted a €750 billion ($848 billion) rescue package and supplemental budget that combined significant new debt, measures to fight COVID-19 with broader economic stabilization, and stimulus spending, one of the largest plans in Europe if not globally at around 27 percent of GDP. By June, a second package of €130 billion ($147 billion) worth of tax cuts and payments followed.

Similarly surprising to many observers was the joint proposal by Merkel and French President Emmanuel Macron for the aforementioned €500 billion ($565 billion) EU rescue fund that included joint debt issuance by the EU. This turnaround from Berlin’s opposition to Eurobonds as late as March of this year caught many by surprise, leading some to speak of a “Hamiltonian moment” for the EU. Given long-standing German abhorrence of debt mutualization in the union, the country seems well-placed in its broker role as the EU presidency to convince skeptics like the frugal four—among a coalition of member states that have often ended up on Germany’s side in these debates in the past—that special times required special measures. Merkel’s apparent reversal on such a fundamental issue in the home stretch of her chancellorship have also made her the subject of a somewhat American debate about a concern for her political legacy that is usually said to drive second-term US presidents.

Why Germany may come up short

But apart from the sheer number and complexity of challenges facing Germany in this role and the limited political capital at the disposal of even the most influential EU presidencies, a different type of legacy may undercut Merkel’s best—and possibly too little too late—intentions. Domestic challenges of her own making could be the biggest obstacle in meeting expectations abroad for transformative leadership in the EU at a time when German decisionmakers are realizing that they could have a historical role in fighting to “maintain EU integration as such.” The “one-sided narrative of Germany being Europe’s paymaster,” one that Merkel and much of the country’s mainstream political and media elites have fueled all too willingly for more than a decade since the beginning of the euro crisis, could come back to haunt Germany’s ability to step up at a critical moment for Europe.

Part of that narrative is a distinct failure to prompt a more fundamental, long overdue debate with the German public about the country’s role and leadership in the EU and globally. That debate cannot just be about what is “financially undesirable” about the European project but has to focus on what is “politically necessary” for a country that depends on a viable, cohesive EU for its economic competitiveness and global influence more than most powers of its size, as a Munich Security Conference briefing puts it succinctly.

Another dimension of that narrative and its accompanying failures is the party-political environment that both have paved the way for. A little more than a year before a federal election, the nationalist Alternative for Germany (AfD) that was founded as a euroskeptic party and has lost the most ground as a result of Merkel and the CDU’s resurgence during the pandemic will look for opportunities to attack the Christian Democrats on the right should the chancellor step too far out of the bounds of Germany’s fiscal orthodoxy during the EU presidency. Fiscal hawks in Merkel’s own CDU who have shown few signs of conversion to her new approach will also be watching carefully how her decisions may impact their party’s electability in the fall of 2021 as Merkel’s persuasive powers as an outgoing chancellor are limited.

There are still some signs of hope that Germany can muster the will to do what is necessary for the EU and eurozone to recover from the crisis and use its presidency to help set the union on a path of sustainability. There seems to be a recognition of this critical juncture for Europe. Germany’s public, and its younger generation in particular, appears to grasp the moment of truth more than some of the country’s political elites do. In a recent reputable poll, nearly 70 percent of Germans support the EU rescue plan, almost 60 percent think mutualized debt instruments are “acceptable” in the current circumstances, and 54 percent believe the EU should deepen its cooperation.

Image: German Chancellor Angela Merkel and the head of the European Commission, Ursula von der Leyen, hold a joint news conference via video conference to mark Berlin taking over the EU's rotating presidency from July 1 until the end of the year, in Berlin, Germany, July 2, 2020. Kay Nietfeld/Pool via Reuters