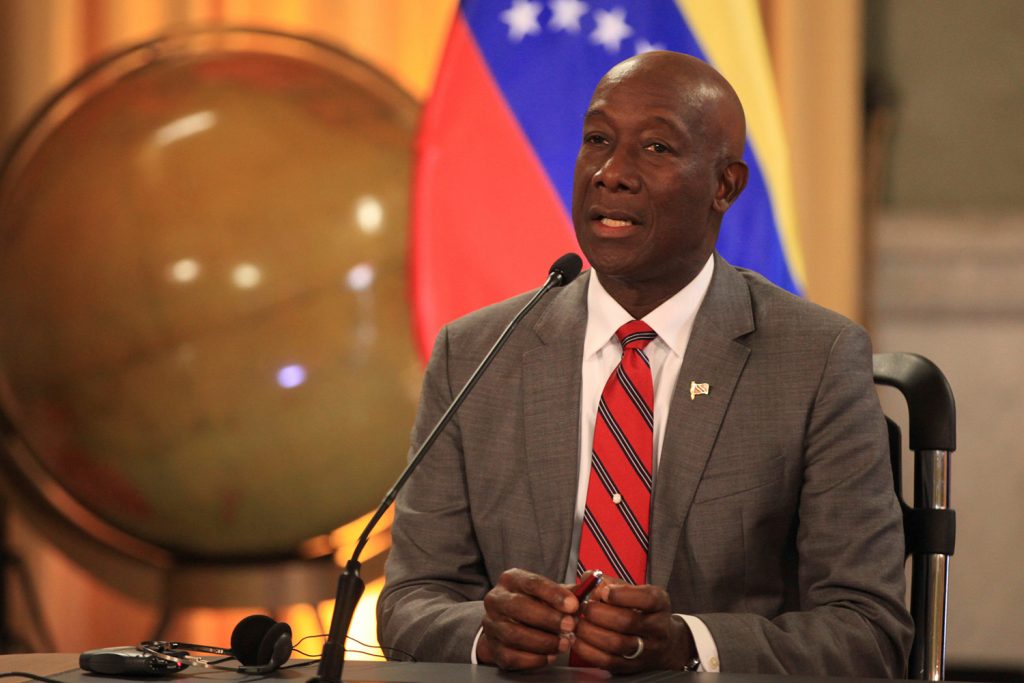 It’s a challenging moment that also offers an “opportunity to reset relationships” between the region and the United States, which “continues to be a significant partner for our 16 million-strong community in a number of areas: security, trade, investment, energy, agriculture, education, tourism, and of course, sport,” he says.

Rowley, who is also currently chairman of the fifteen-member Caribbean Community (CARICOM), made his comments during an Atlantic Council Front Page event on February 26 that marked the launch of the Adrienne Arsht Latin America Center’s new Caribbean Initiative.

Here’s a look at what Rowley said about COVID-19, climate change, the region’s financial vulnerability, and current US policy on Cuba and Venezuela.

Vaccinating the Caribbean is in everyone’s interest

The Caribbean’s first order of business, said Rowley, must be the equitable distribution of vaccines.

“The pandemic has spawned a crisis in health, closed our borders, crippled economic growth, and is creating a debt crisis that is unraveling noteworthy gains made by CARICOM countries,” Rowley said, noting that the Caribbean is deeply dependent on tourism, which has come to a near-standstill because of global travel restrictions.

In normal times, tourism accounts for 50 percent of gross domestic product (GDP) and more than 60 percent of foreign exchange regionally. In Trinidad’s case, the hardships have been compounded by a 20 percent drop in crude oil prices and an annual food import bill exceeding $4.7 billion.

“It is for this reason that the fair, transparent, and equitable distribution of COVID-19 vaccines is critically urgent,” he said. He praised US President Joe Biden’s plan to channel four billion dollars to the COVAX Facility over the next two years to support equitable vaccine distribution, along with the Group of Seven’s (G7) $4.3 billion to distribute COVID-19 test kits globally.

Rowley said CARICOM expects the region to receive its first large-scale shipments of vaccine doses in mid-March. So far only Barbados and Dominica have received shipments, including 170,000 doses donated by India.

“The United States, more than any other country, can change what’s happening right now and make sure that the plan that was worked out before we had a vaccine, the COVAX [Facility], is made to work. All the pitfalls we’re facing now were discussed before and were anticipated—and we sought to head it off by creating the COVAX mechanism,” he said.

“We knew from past history and from human behavior that it could have been possible—if it was left as a [free for all]—that the strong ones would eat first and the weaker ones would starve to death,” he added. Unfortunately, Rowley said, “the larger, more powerful countries with fatter wallets are literally dominating the supply and distribution of what vaccines are available.”

To that end, Rowley urged the Biden administration—along with other major powers—“to ensure [that] the transfer of significant quantities of vaccine gets to poorer countries.”

He warned of the danger of virus variants developing in countries like his where vaccines have not been distributed. “Strong, wealthy countries trying to inoculate themselves [could] discover that those who they ignored were the Petri dish where variants occurred, and those variants now make the vaccinations that were done useless,” he cautioned.

Rowley said he doesn’t expect a quick economic recovery, noting that the International Monetary Fund (IMF) forecasts “significant debt-servicing problems for many developing countries as a result of the massive fiscal support during COVID-19.”

Rowley’s appearance took place the day after CARICOM convened to discuss measures addressing this economic crisis including a new IMF allocation of Special Drawing Rights, conversions of debt into long-term and low-interest loans, and a “vulnerability index” to determine countries’ access to concessional funding.

“We call for the refinancing of COVID-related debt and the postponement of debt-servicing payments, comprehensive debt relief, and appropriately priced funding to build economic and climate resilience,” he explained.

Rowley said that CARICOM plans to establish a development fund and is hoping for international assistance to provide “a guaranteed base for this fund,” which “will create a pool of money for development for CARICOM nations.”

This is crucial, Rowley said, because many Caribbean island states, including his own, have had to use up development funds to fight the virus. “So we are now virtually without any wiggle room to finally even be able to borrow funds for development programs,” he said.

CARICOM: a leader against the existential threat of climate change

Rowley said he applauds Biden for bringing the United States back into the Paris climate agreement. But that’s only a start, he added.

“Climate change is real, as evidenced by the inconceivable reality of a major hurricane flooding the New York subway; raging fires scorching the California landscape, leaving a path of death and destruction; and record-breaking low temperatures causing loss of life and collapsing infrastructure in Texas,” said Rowley, recalling the Caribbean’s own long history of dealing with devastating hurricanes. “We, therefore, continue to actively engage at the international level, providing guidance, scientific support, and leadership on the climate issue.”

In agreement with the United Nations’ Intergovernmental Panel on Climate Change and the agenda of the upcoming COP26 conference this November in Glasgow, Scotland, Rowley said emissions of greenhouse gases must be slashed in half by 2030 in order to limit post-industrial warming to below 1.5 degrees Celsius.

“Such actions will barely protect our fragile ecosystem on which agriculture, fishing, and tourism depend heavily,” Rowley said, adding that CARICOM hopes to “work together with all parties” to move towards low-carbon alternatives and renewable energy. “To do less is to put at risk our generation and generations of the future.”

The case for a “thaw” with Cuba and dialogue with Venezuela

Rowley criticized former US Secretary of State Mike Pompeo’s January 11 decision to put Cuba back on the State Department’s list of state sponsors of terrorism along with North Korea, Iran, and Syria—just nine days before Biden’s inauguration.

“We were very disappointed when the United States recently reversed the very welcome halting steps toward normalization of the relationship [between Washington and Havana], and most recently, the announcement of the unconvincing designation of Cuba as a terrorist-sponsoring state,” Rowley said. “We could all benefit from a significant thaw in the relationship.”

Rowley also expressed disagreement with the Trump administration’s decision to impose severe economic sanctions on Venezuela in August 2019 as part of its efforts to pressure Nicolás Maduro into ceding power to Juan Guaidó, whom Washington recognizes as Venezuela’s rightful president.

“We would like to see a dispassionate, early review of the US scorched-earth policy,” said Rowley, citing a recent UN report that “confirmed what we always knew: the ineffective, harsh policies of unilateral sanctions are contributing immensely to widespread additional human suffering in this Caribbean nation, which needs help.”

Trinidad, located only seven miles off the Venezuelan coast, has long had friendly relations with its much larger neighbor.

“Venezuela’s relationship with the Caribbean and with the US is so fundamental to our comfort and prosperity,” he said, noting that Venezuela has the world’s largest known oil reserves—and that Trinidad is a leader in exports of liquefied natural gas.

“Very early in my tenure, we were able to get Venezuela to agree to do something which had not been done before, which is to export its gas. All the arrangements were made,” said Rowley, who is widely credited for the revival of his country’s long-stagnant natural-gas sector. “Everything was in place to have Trinidad and Tobago tapped for the international market, but the sanctions on Venezuela have brought a halt to all of this.”

Rowley urged the Biden administration to “give dialogue a chance” with the Maduro regime.

“The United States once again has the stature and the interest to bring the Venezuelan parties to the table with the support of CARICOM and other nations, read the riot act to everybody, and agree [that] Venezuelans must solve Venezuela’s problems—not only in the interests of Venezuela but in the interest of all of us who are co-dependents,” he said. “I would ask the administration to not be overly influenced by the dogmas of the recent past.”

In Latin America and the Caribbean, this year’s Human Rights Day marks a grim trend as COVID-19 sets back decades of progress for women and girls. And without enlisting everyone, including men, in the fight for women’s empowerment, society’s ability to achieve gender equality is limited.