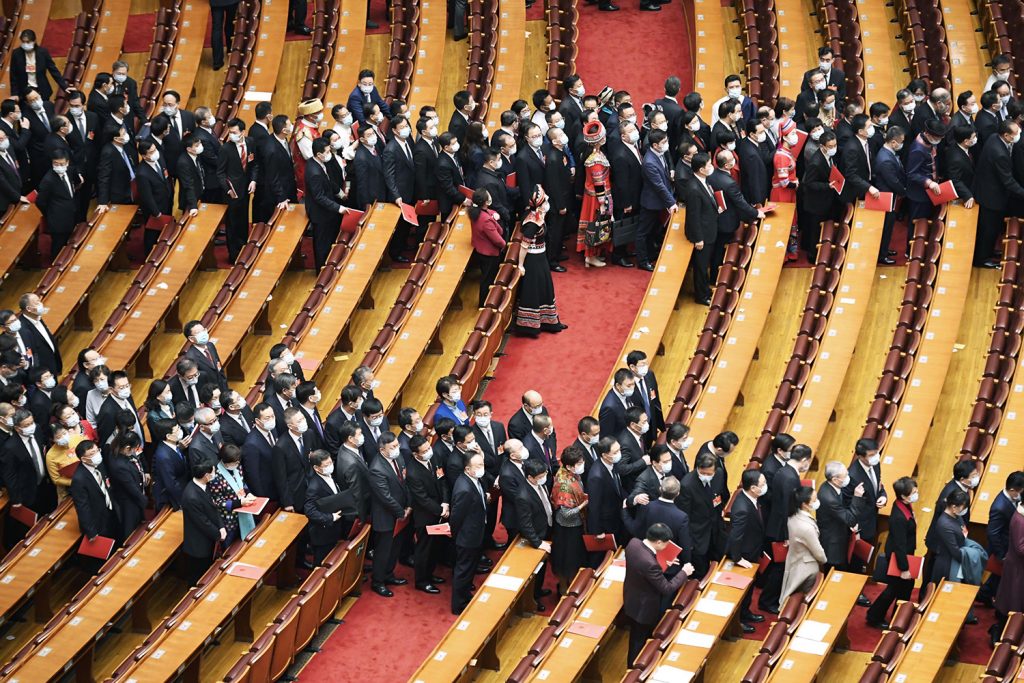 Participants leave the Great Hall of the People in Beijing after the closing ceremony of China's National People's Congress on March 11, 2021 via Reuters.

Conventional wisdom, shared by members of the US Congress in both parties and the Biden administration’s recent Interim National Security Strategic Guidance, considers China the “pacing threat” and the United States’ strongest competitor.

The reasons at first examination look compelling. China’s economy may overtake the US economy. China may be ahead in game-changing technologies such as artificial intelligence and 5G. China has fielded a modern military with a navy on track to have 500 ships, with many patrol boats and small craft (while substantially larger than the US Navy’s approximately three hundred-ship fleet, it is not nearly as capable). China has become more aggressive in its region in pursuing its aims. Questions are arising about the future integrity of Taiwan as an independent state. And the Belt and Road Initiative has become a multi-trillion renminbi program to gain access and influence through offshore investments and loans. Taken together, these factors argue that China is out to challenge the United States as a global leader in virtually every category.

However, is this a complete assessment of China? The answer is no because it lacks a balanced analysis and evaluation of both strengths and weaknesses. Consider the following historical comparison.

This October, China will celebrate the seventy-second anniversary of the founding of the People’s Republic of China (PRC) in 1949. In November 1989—roughly seventy-two years after the start of the Russian Revolution that led several years later to the formation of the USSR—the Berlin Wall came down, beginning the dissolution of the Soviet Union.

Seventy-two years after the founding of the PRC, no one is suggesting that China is close to collapse. But hidden among the more obvious examples of its growing power and influence are otherwise unmistakable weaknesses and issues. Unless these are understood—seeing as the collapse of the Soviet Union came as a surprise—China too may be subject to huge domestic pressures and an increasingly controlling party structure that risk alienating substantial segments of the population.

The Chinese Communist Party (CCP) under President Xi Jinping’s administration appears to have abandoned former Chinese leader Deng Xiaoping’s policies of rule by consensus and a large degree of economic freedom crucial to creating a modern and advanced society. Crackdowns on hyper-rich Chinese businessmen; strict adherence to Marxist-Leninist ideology; the crushing of dissent, whether in Xinjiang, Hong Kong, or internally; and the purging of political rivals are not signs of a healthy political system, especially when innovation is dependent upon entrepreneurship that cannot be dictated by Karl Marx or Vladimir Lenin’s philosophies.

Over one hundred thousand large-scale protests a year have been reported in China as people call for more resources at home and an end to rampant corruption that favors the few rather than the many. A combination of so-called social credits that grade citizens on loyalty and credit-worthiness—using facial recognition—enables the CCP to exert further control over Chinese society.

An internal financial system with huge debt, shadow banking, a possible real-estate bubble, and the need for significant real annual economic growth to respond to expectations for better standards of living raise massive challenges for the leadership in Beijing. The “one-child” policy has led to an aging population, in which the ratio of retirees to workers is headed in the wrong direction, and to substantially more men than women in Chinese society, which means many men will not find spouses.

China also lacks viable allies. Still, China has managed to contain the United States by reaching a trade and investment agreement with the European Union, which must still be ratified by the European Parliament. It has also signed the fifteen-country Regional Comprehensive Economic Partnership, strengthening its potential for economic growth. China has reportedly struck another deal with Iran involving trade, oil, and investments that could circumvent the sanctions imposed on Iran by the West and regional states.

The possible political cancers that could infect China are, first, the CCP’s increasing autocratic control over the public, which stifles economic productivity, and, second, a debt-ridden balance sheet that could lead to a financial crisis. The Soviets suffered from the first and then-Soviet leader Mikhail Gorbachev tried to reform what was a failed system, igniting the implosion. The more China attempts to control its population, the more it risks a backlash.

Chinese leaders understand that for centuries, peasant and other revolutions have wracked the country. The most recent was the lengthy civil war ending in 1949. A future revolution may take another form. But make no mistake: China is not an unstoppable colossus. The fact is that, as in the former Soviet Union, China has an oppressive political-ideological regime that limits human ingenuity, imagination, and innovation. This may prove to be the fatal flaw in Chinese aspirations.

In the 1980s, Japan’s boom led to the prediction that Japan would dominate world economies. That did not happen. Will the same outcome apply to China?

This article was originally published by UPI and has been reprinted with the author’s permission.

Dr. Harlan Ullman is UPI’s Arnaud deBorchgrave Distinguished Columnist. His latest book, The Fifth Horseman and the New MAD: The Tragic History of How Massive Attacks of Disruption Are Endangering, Infecting, Engulfing, and Disuniting a 51% Nation, is due out this year.

The China plan: A transatlantic blueprint for strategic competition

China presents the United States and its partners with the most serious set of challenges they have faced since the Cold War. To manage this challenge, transatlantic nations need a blueprint to build a common approach.