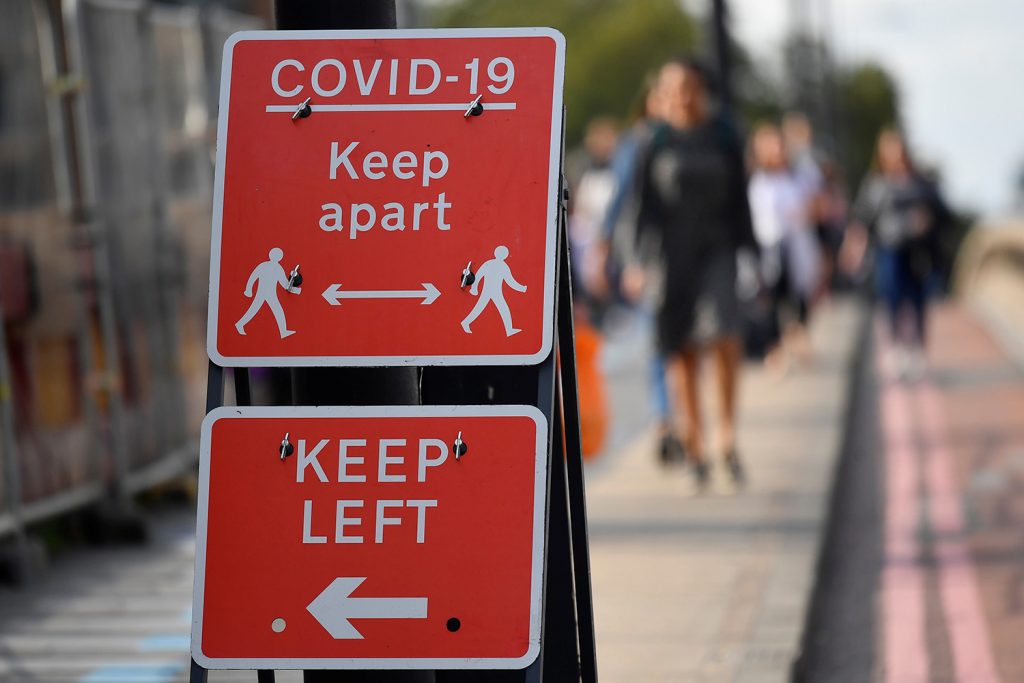 The coronavirus crisis is straining British unity. It is splitting England, where the leaders of major northern cities are fuming over the UK government’s determination to impose tough new restrictions in order to tackle the virus. It is boosting support for Scottish independence, already at record levels and where Scotland’s independence-seeking first minister is enjoying widespread support for her approach to tackling the crisis. The virus is again illustrating the radical differences between Northern Ireland and the rest of the UK, as the regional government in Belfast imposes tougher restrictions than the central government is prepared to impose. And it is even demonstrating the presence of a real physical border between Wales and England.

The North of England

The consequences of the current tensions should not be underestimated. The alienation of the North of England is the most immediate issue for Prime Minister Boris Johnson, since it constitutes a crisis of government that requires immediate resolution. But it is also crucially important for the longer-term future of Johnson’s ruling Conservative Party which owed much of its landslide General Election triumph last December to its victories in many traditionally Labour seats in northern England.

The Government’s willingness to compensate victims of the economic fallout from the virus is the main issue at stake. Johnson announced on October 12 a three-tier system of restrictions aimed at ensuring the current resurgence of the virus could be tackled on a local, rather than a national basis. This meant he was prepared to put the City of Liverpool into the highest category (Tier Three), which means households cannot mingle (unless in a support ‘bubble’) and pubs and bars must close, while people should avoid entering or leaving the area. But Johnson was not prepared to accede to the request of Liverpool Mayor Steve Rotherham that the government should provide extra money for those losing their job. On October 9, the Government did announce a new furlough scheme for hospitality firms ordered to close their doors under which it would pay two-thirds of workers’ wages. But this prompted widespread criticism from groups representing these workers, who generally earn low wages to start with.

The Government has said it wants to work with local authorities, but in practice it either seems to be ignoring their concerns or overriding their objections. On October 15, amid widespread reports that it was preparing to place Greater Manchester under Tier Three restrictions, government officials met with local mayors. One of the mayors, Oldham’s Sean Fielding, tweeted after the meeting: “I am far from a seasoned negotiator but the GM (Greater Manchester) meeting just now was a masterclass in how not to do it. Opening line from Govt: ‘We either do tier 3 with you or impose it.’ And then absolutely nothing is offered to bring us on side because ‘there is no money’.”

Andy Burnham, who as mayor of Greater Manchester is the region’s most powerful local executive, was equally condemnatory. Greater Manchester, Liverpool, and Lancashire are being “set up like canaries in a coal mine,” he said on October 15. “We have unanimously opposed the government’s plans for Tier 3. They are asking us to gamble our residents’ jobs, homes and businesses…on a strategy their own experts tell them might not work.”

Nor will the prime minister have won many friends—either in the North or elsewhere—when his spokesman summarily rejected a call from Manchester United star striker Marcus Rashford for the government to provide free meals for schoolchildren during the upcoming half-term break and over the Christmas holidays. On October 10, a previous campaign by Rashford to secure free school meals for about 1.3 million children during the summer holidays led to him being awarded an honour in the Queen’s annual birthday list.

How all this will play out in the immediate future remains uncertain. But it has reduced trust in central government, particularly at a time when Johnson is under pressure from the Opposition Labour Party Leader, Sir Keir Starmer, to impose a two- or three-week nationwide ‘circuit breaker’ lockdown to deal with a surge in the virus which has seen UK rates double since the start of October, so that roughly one household in every 240 now includes a coronavirus case, and with a death rate now running at well over a hundred a day when it was in single figures only a month ago.

In Northern Ireland, First Minister Arlene Foster announced on October 14 that she was introducing a four-week ‘circuit breaker’ lockdown to take effect from October 16. It demonstrates once again Foster’s willingness to adopt a tougher course than the UK government is taking, and how much she cherishes Northern Ireland’s autonomy. However, the measure’s impact on the age-old question of potential unification with the Republic of Ireland is likely to be modest, at best, since issues concerning national or religious identity are of much greater consequence. In Northern Ireland, under the UK’s National Health Service, medical treatment for everyone is free at the point of delivery and this appears to remain a factor in support of continued union with Britain. In modest contrast, the Republic’s universal insurance system is free at point of delivery for about a third of the population, but relies on a subsidized fee system for most services.

It is in Scotland that COVID-19 is having its greatest impact in terms of bolstering nationalist ambitions. The leader of the Scottish Government, Nicola Sturgeon of the pro-independence Scottish National Party (SNP), currently enjoys extremely high levels of public approval for her handling of the coronavirus crisis. A poll published on October 14 shows 72 percent of Scots are satisfied with the job Sturgeon is doing, but, more importantly, it also shows support for Scottish independence at a record high of 58%.

As a result, the SNP is extremely well placed to secure a resounding victory when the Scottish parliamentary elections are held next May, and, since it will campaign on the issue, will then claim this gives it a mandate to hold a second referendum on Scottish independence. UK law states that such a referendum also needs UK Government approval, and since Johnson has rejected the idea on the grounds that the 2014 referendum closed the matter for a generation, the stage seems set for a titanic constitutional clash.

Before coronavirus, the idea that people in England would be prevented from crossing into Wales would have seemed outrageous. For more than 600 years Wales was governed as if it were part of England, with no formal recognition of its historic identity until some civil service functions were transferred to the newly established capital at Cardiff in the 1950s and 1960s. But Wales’s First Minister Mark Drakeford is not only assessing whether to introduce a ‘circuit breaker’ lockdown in Wales, but has already announced that—unless the prime minister imposes UK-wide travel restrictions—then from October 16 Wales will bar entry to people from other parts of the UK with high coronavirus levels. He added that there would extra police patrols on the road and that they would be empowered to issue fines for those who defied the regulation. In Scotland, Sturgeon has said she supports Drakeford’s move, but a leading member of the UK Government, parliamentary business manager Jacob Rees-Mogg, has denounced it as “unconstitutional.”

What all this suggests is that 2021 will see a major political crisis over the issue of a new Scottish independence referendum, and—should it be granted—an increasing prospect of outright independence in a few years’ time. It may also see Welsh nationalism reinvigorated—the most recent poll showed 32 percent of Wales favors independence—and it will certainly see the Sinn Fein members of Northern Ireland’s coalition executive push harder for union with the Republic of Ireland.

But England still accounts for 84 percent of the UK’s population, and it is on English politics that COVID-19 is likely to have its greatest impact. Last December, Boris Johnson led the Conservative Party to a thumping election victory. COVID-19 is now undermining that victory as Northern cities chafe under regulations imposed by the central government, as Labour’s new leadership exudes an air of quiet competence, and as internal Conservative dissension mounts on a variety of fronts. The Conservatives have a long history of ruthlessly rejecting leaders they think are failing their cause and current opinion polls show 57 percent of the population think the prime minister is currently performing badly.

Boris Johnson may not be the only prime minister who is tasked to deal with the fallout from COVID-19.

Is British Prime Minister Boris Johnson really putting the Northern Ireland peace agreement at risk, or is it just a ploy to improve the UK’s position in negotiating a post-Brexit trade agreement?

Image: Pedestrians walk near public health signs, whilst the reproduction "R" number of COVID-19 infections in the United Kingdom has risen and may be above 1, the Government Office for Science said on Friday, indicating a risk that the overall epidemic is growing, London, Britain, September 11, 2020. REUTERS/Toby Melville