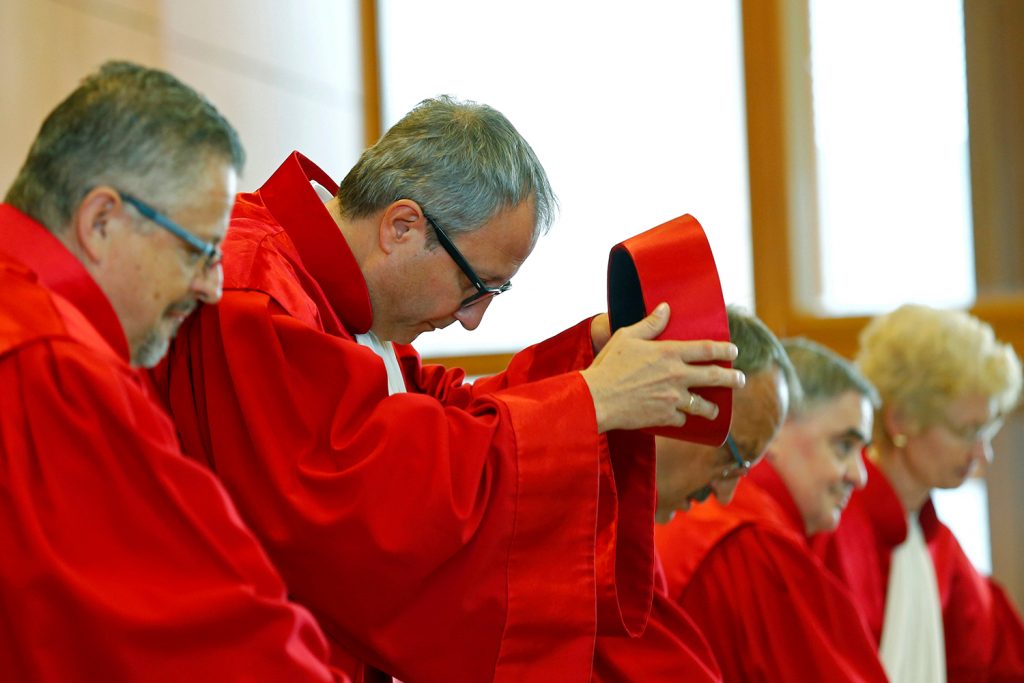 On May 5, the German Federal Constitutional Court will issue a ruling about the ability of the German Bundesbank to participate in the European Central Bank (ECB)’s quantitative easing programs. The case has been brought by a group of Eurosceptic German academics and lawyers that have challenged European economic integration and its resulting institutions and programs with some frequency over the past few decades.

The transfer of national powers to European Union institutions has been made over time by way of legal and political compromises, sometimes reached in a crisis. The transfer is not symmetric, which leads to gaps in democratic legitimacy and tension between national laws and European treaties. Flexible judicial interpretation of treaties, national law, and precedent has to-date supported the continued functioning of the programs and tools of the (ECB and European Stability Mechanism (ESM).

The monetary union’s institutions and practices especially sit uncomfortably on top of their legal framework: an example are the closed-door meetings of the euro group of finance ministers, in which critical decisions about economic governance are made, especially in moments of economic stress. Member state parliaments then rubberstamp these decisions while simultaneously pretending that they are still somehow exercising national jurisdiction. The tension between the joint institutions and national politics is exacerbated by false, lazy, or selective summaries of economic history, including the notion of a disciplined, fiscally responsible ‘North.’

The fact is that Germany’s export prowess has benefited significantly from the switch into the globally more competitive euro from the mark and significantly increased demand for its goods from consumers in countries like Italy. Additionally, almost every country in the monetary union free rides on the others in one way or another: France only occasionally and opportunistically complies with the deficit target, Austria and Greece have never had debt lower than 60 percent of gross domestic product (GDP), Germany undermined the importance of the fiscal rules with its own non-compliance in the early 2000s, the Netherlands and Ireland boost their growth with tax regimes that undercut the others, etc., etc.

In the context of the pandemic and the economic shutdowns driven by public health imperatives, the ECB has aimed at playing the same role as other major central banks: it has addressed the deflationary shock by pushing liquidity into the economy through a combination of asset purchases, lower lending rates, encouraging bank lending, and select interventions in frozen or thin capital markets.

Like the Federal Reserve, the ECB has also loosened restrictions on its own abilities to intervene as necessary, including grandfathering in credit ratings as of April 7, preserving its ability to intervene should assets it considers it needs to purchase be downgraded into speculative grade. The ECB’s importance in this cycle is amplified as the joint fiscal response by EU governments has been slower to materialize due to disagreements on the size of the effort required and its funding.

The ECB is of course not subject to the jurisdiction of the German Federal Constitutional Court—the court can only address the Bundesbank’s participation in its programs. In prior rulings, such as when it was asked to opine on the ECB’s never-used outright monetary transactions program (OMT), it has issued nuanced parameters to guide the Bundesbank’s participation. Any parameters in the May 5 ruling about quantitative easing programs will have an immediate impact—in contrast to the OMT, the ECB is actively engaged in easing programs. Under the existing Asset Purchase Programme, it has built up holdings of approximately €2.7 trillion across asset classes. Under the new Pandemic Emergency Purchase Programme, it has so far purchased €119 billion of securities.

So far, the ECB has committed to asset purchases roughly in accordance with each member state’s contribution to the European economy. This has led to market speculation that suggests the German court will add that as a restriction on the Bundesbank’s participation, though there is no precedent for such a restriction in prior rulings. Over the next few months, the ECB is likely to have to purchase significant amounts of new Italian and Spanish sovereign and bank bonds, to support the transition out of social distancing measures. A ruling that finetunes or places restrictions on the Bundesbank’s participation in these purchases may well elicit a strong market reaction as a result.

In its public statements, the ECB governing council has stated that it will update or remove self-imposed limits as needed to ensure that the impact of its programs remains intact. Since the ECB itself remains under the sole jurisdiction of the European Court of Justice, there is no doubt it will adjust its toolkit as needed to ensure stability of European debt capital markets. The European Council would do well to use the stability provided to advance its own more ambitious response to the economic shock.