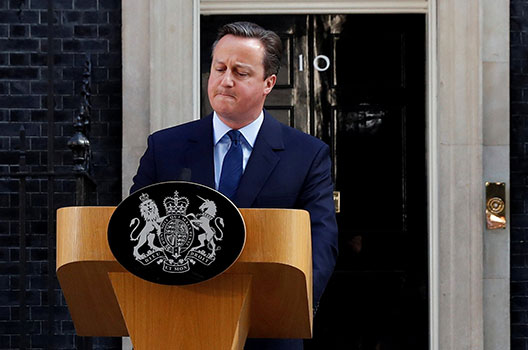 There is an old rule in lawyering, never ask a question if you are not certain of the answer. Three years ago, in a selfish gambit to solidify his personal mandate for a second term as prime minister, David Cameron did just that. His reward: thirteen extra months in 10 Downing Street entirely consumed by a destructive and divisive referendum debate.

On June 24, Cameron announced his decision to resign in October, but the broader collateral damage from the British decision to leave the European Union will be tremendous. Europe and the United Kingdom are now in uncharted waters. The separation negotiations that lie ahead will be fraught. With French and German elections approaching, a concerted desire in Brussels to make the United Kingdom a cautionary example for other would-be exiters, and a significant amount of bad blood, a deal will not come easily. The result is the looming shadow of a regulatory blackout for the United Kingdom. Without knowing what law will apply upon exit, what business would possibly invest in the United Kingdom or what will remain of the United Kingdom?

For Europe, there is now not a realistic alternative to the EU being defined by a core of certain member states with connections emanating outward to others. The elections in Spain on June 26, with a Podemos-led government an unlikely but not impossible outcome, will go a long way in determining whether this core will be centered around the euro or driven by creditor countries.

This is a soul-searching moment for Europe. This referendum campaign was a debate between common sense and passion with passion winning a resounding victory. For the European Union to halt this process of unraveling, it desperately needs a clearly articulated and compelling narrative that speaks not only to people’s heads, but to their hearts. This narrative is lacking at the moment. Unless we figure it out quickly, the European project is doomed to be continually confounded.

Nigel Farage, the leader of the UK Independence Party, called for June 23 to be commemorated forthwith as the United Kingdom’s independence day. For Europe, June 23, 2016, should be long remembered for this will be an inflection point in our history when the European project either gained the perspective and impetus to persevere or hurtled perilously toward dissolution.

In terms of how things will look day-to-day in Brussels moving forward: Until June 24, Brussels was largely in denial about the possibility of a Brexit. Heads have been firmly in the sand. Now, of course, reality has struck.

Under Article 50 of the Lisbon Treaty once the intention to withdraw is communicated to the European Council negotiations begin on the separation agreement. The treaty allows for a negotiation period of up to two years beginning with the communication, with the possibility of an extension by the unanimous agreement of all the EU member states.

Article 50 was introduced during the drafting of the ill-fated European Constitution in consideration of the possibility that new former communist member states entering during the fifth enlargement of the union might have difficulty complying with EU standards, finding themselves subject to sanctions and thus desiring a way out. The two-year negotiating period was established to prevent a state that had decided to leave from hijacking the institution by refusing to negotiate. What the machinery did not envision was the possibility that the notification kick-starting the formal negotiating period itself would be delayed.

Indeed, the timing of the delivery of the formal communication has already become one of the central discussion points for British politicians in the hours after the announcement of the referendum results. Though there are already calls for a quick start to negotiations, notably from lackluster Remain campaigner and Labour Party leader Jeremy Corbyn, a slight delay would make sense to skirt opening, concluding, or extending negotiations near the French and German elections, which would build public pressure for a more hardline approach to the United Kingdom.

Ultimately, I expect that after an initial period of political declarations of interests sober minds will prevail. There is too much at stake for both the United Kingdom and the European Union not to come to an agreement that smooths out, as well as possible, economic relations. Once negotiations move from the public eye we might see the United Kingdom essentially accepting the lion’s share of the acquis communautaire with certain carve outs that paradoxically mirror the current situation, but with less voice in rulemaking.  But this outcome will be several years down the road.

In terms of the day-to-day work of European institutions, life has to go on. It is particularly important for Brussels to show now, in the aftermath of the British referendum, that the European Union is not a broken enterprise. I expect that there will be a push forward to show that work will continue.

Clearly, the referendum and its aftermath will impact some areas more than others. In tax, for instance, there may be a slowdown to contemplate the political ramifications of the United Kingdom’s departure, given the fact that the United Kingdom has been a prominent voice in favor of tax reform. While this is going to suck out the oxygen in some areas, others, notably copyright, should continue although in an even messier fashion.

It should be emphasized, however, that this is the very beginning of what will be an extended and complex process. How exactly this development will impact various files will become clearer in the coming weeks, particularly given the uncertainty of the human resource staffing with key British officials in crucial European Commission Directorate-Generals. Having direct and continuous access to policymakers and following developments closely will be of the utmost importance.

One silver lining of the British result is timing. The referendum coming just ahead of Brussels’ summer recess will provide time for digestion and adjustment during the lull before activity ramps up in the fall.  Had the referendum been held in October, as some had originally suggested, this outcome would have been even more difficult to navigate.

Ana Palacio is a former foreign minister of Spain.