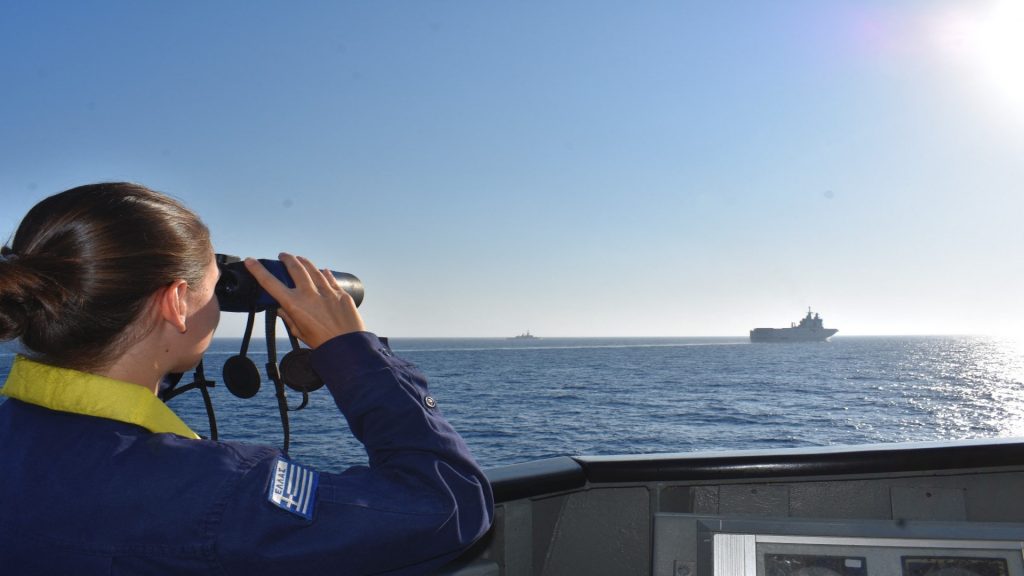 Decades from now, historians may agree with Greek Prime Minister Kyriakos Mitsotakis’s description of the strategic defense agreement signed last week between France and Greece as “the first step towards a European strategic autonomy.” The deal supports the European defense industry because Greece agreed to buy three warships from the French builder Naval Group—the same firm that lost a contract with Australia as a result of the AUKUS partnership.

But the agreement is more than just an arms deal. French President Emmanuel Macron lauded it as advancing his dogma of European strategic autonomy. Among other provisions, the two NATO members agreed to a mutual defense assistance clause in case of a third-party attack, and as a result, Article Two of their treaty looks much like NATO’s Article Five. It’s clear from the context that it aims to address instability in the Mediterranean by tackling multiple challenges in the region, from armed conflict and terrorism to migration flows and energy challenges.

For his part, Mitsotakis believes the agreement essentially goes beyond each country’s obligations within NATO and the European Union (EU) by committing to mutual defense assistance. Such a pact between two member-states is a first for NATO, even as its members routinely form alliances with third countries (such as US deals with Finland and Sweden or the trilateral Greece/Cyprus/Israel and Greece/Cyprus/Egypt partnerships).

Yet the Greek-French defense pact is bound to bring to the fore some of the underlying challenges in NATO’s southern flank, such as the longtime tensions between Greece and Turkey. Open conflict between the two Alliance members is not an outlandish scenario: Ankara has repeatedly warned that it would consider Athens’ expansion of its territorial waters to twelve nautical miles—as Greece stresses is its “non-negotiable” right to do—to be cause for war. Lately, Turkey has also expanded its claims based on its “Blue Homeland” doctrine to Greek islands, not recognizing a continental shelf or the right to an exclusive economic zone (contrary to international law as defined by the United Nations Convention on the Law of the Sea, which Turkey has not signed).

In such a conflict, NATO would be caught in a tricky position. Recognizing this reality, it has set up a deconfliction mechanism to help avoid new tensions from flaring up. Yet being fellow members of the Alliance has not helped the two countries address their maritime disputes, and NATO has shied away from taking sides. With this pact, the understanding in Greece is that France is effectively pledging to take its side—including in armed conflict—should both believe there has been an attack on Greek sovereignty. Ankara, meanwhile, has criticized Athens for what it says is a “policy of armament, isolating and alienating Turkey.”

The United States, which has been the primary mediator between Greece and Turkey, welcomed the agreement in principle, with a State Department spokesperson saying Washington “strongly support[s] Greece’s role in creating stability in the region.” Indeed, in the context of its National Security Strategy, the United States has encouraged partnerships between its allies in the Eastern Mediterranean as a way to counter Chinese and Russian influence in the region. The need to do so is timely as US forces disengage from the Middle East, which leaves room for Iran and Turkey to expand their own zones of influence there.

The Franco-Greek alliance may be seen through the same lens—as a valuable partnership of US allies in a tense region. A greater French presence in Greece would strengthen NATO’s southern flank while also helping avoid a destabilizing crisis in the Aegean Sea and the Eastern Mediterranean. Greek diplomats were quick to stress that this pact would complement, not counter, the already strong US-Greece strategic partnership. An update of their defense agreement next month is expected to cover a long-term period, allowing for more investment in US bases such as Souda Bay in Crete (a strategic island that’s been characterized as an unsinkable aircraft carrier).

Macron has noted that Europe should not be naïve and should act to strengthen its common defense, given the US pivot to Asia. Yet Europe should not discount the United States’ continued interest in European security. Strategic sovereignty—a term preferred by France’s ambassador in Washington—may be a better way of framing this new pact and setting the goals for European autonomy. It does not imply a separate course for Europe, but the proactive support of joint transatlantic priorities in its neighborhood, principal among them being the stability of the Mediterranean.

Katerina Sokou is a nonresident senior fellow at the Atlantic Council’s Europe Center and the Washington correspondent for the Greek daily Kathimerini and SKAI TV. Follow her on Twitter @KaterinaSokou.

How to ensure Afghanistan isn’t the graveyard of European defense

By Federica Fazio and Nicolas Adams

Image: The French and Greek navies take part in a joint exercise off the island of Kastellorizo in the Eastern Mediterranean on August 13, 2020. Photo by Hellenic Navy via ABACAPRESS.COM/Reuters.