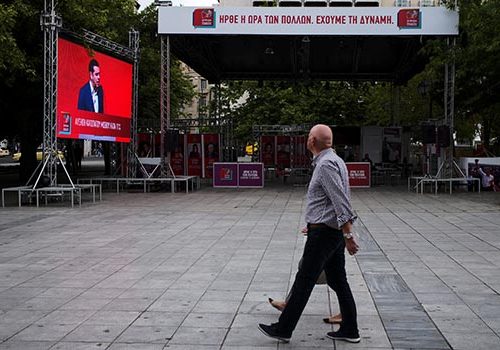 European elections are a win, of sorts, for Greece

Overcoming the strains with its European partners, Greece is heading to its first European elections after the crisis with its biggest parties claiming not only to be pro-European, but also to be fighting populism.

US-Greece relations in the Biden era: Why the road to rebuilding the transatlantic alliance runs through Athens

By George Pagoulatos and Katerina Sokou

The United States should deepen its strategic engagement with Greece to jointly address challenges posed by competition among global and regional powers.

Katerina Sokou is the Washington DC correspondent for SKAI TV and Greek daily newspaper Kathimerini, where she is also a columnist, focusing on transatlantic relations, foreign policy and financial diplomacy (2013-). She has covered extensively the Greek financial crisis, interviewing economists and policy-makers and providing commentary and reporting for news media in the U.S. and Europe.

As a visiting scholar at George Washington University’s Elliott School of International Affairs (2017-2018), she researched the US role in the Greek debt crisis and its impact on bilateral relations, presenting her research in universities across the U.S. and Greece. She continues to work towards a book on the subject. Before that, she was a member of the editorial board and a contributor at the Washington-based European Institute (2016-2017).

Katerina majored in History (BA with First Class Honors, University of Ioannina, Greece) and holds postgraduate degrees in International Studies (MA, University of Warwick, UK) and in Journalism from Columbia University, where she was a Knight-Bagehot Fellow in Economics and Business Journalism (2012-2013). She was also a non-degree student at the American College of Greece, where she studied Economics, and an Erasmus scholar at King’s College London, where she took classes in the Fall of Yugoslavia, Modern Greek History and audited a class on European Politics at the London School of Economics.

She started her career as a financial reporter at To Vima Athens newspaper, covering Greece and the Eurozone since the introduction of the Euro, and was International Financial News editor at Kathimerini during the global financial crisis. At the course of her reporting, she corresponded from Brussels and Strasburg on EU policies, from China on Chinese investments in Europe, from Lithuania and Slovenia on EU enlargement, from Denmark on Europe’s social model, from the U.K. on Brexit, from Egypt on EU’s neighborhood initiatives and from Italy, Switzerland and Germany on European business. She speaks Greek, English, French and some German.