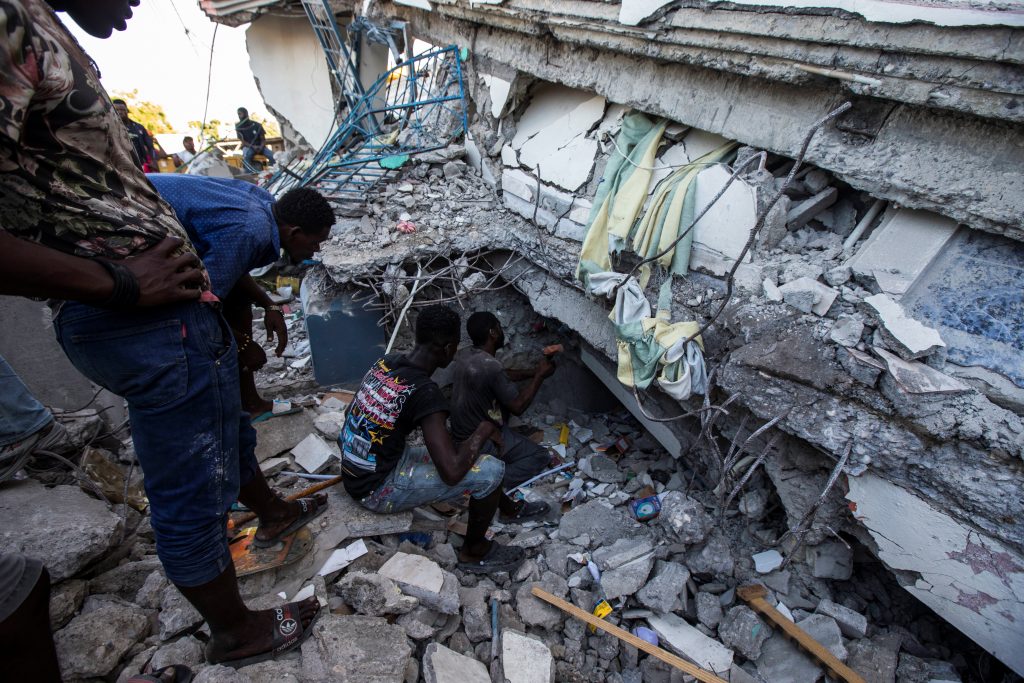 The 7.2-magnitude earthquake that rocked southwest Haiti on Saturday—plus a series of aftershocks—could be felt far beyond the country’s borders. So will the implications of the event. Having never fully recovered from a 7.0-magnitude earthquake in 2010, Haiti was already reeling from instability following the assassination of President Jovenel Moïse just over a month ago.

Now the Caribbean country faces a one-two punch: political volatility and another human tragedy. This is why sustained US and international support is urgently needed.

History unfortunately has a way of repeating itself in Haiti. In less than twenty-four hours, Saturday’s earthquake, striking just forty-five miles from the epicenter of the 2010 temblor, had already led to five aftershocks registering above 5.0 magnitude. Reports are still coming in on the devastation and lives lost, with the count rising to nearly 1,300 on Sunday. Although the earthquake didn’t appear to cause as much damage as the 2010 quake, it did strike nearly two miles closer to the surface, meaning buildings and other structures were rattled even more severely.

What followed the 2010 earthquake was a quick US reaction with then-Vice President Joe Biden pledging ongoing, long-term US focus on Haiti’s recovery. Then-Secretary of State Hillary Clinton’s prompt visit to assess the devastation was also an important signal. More than $13 billion in donations would flow into Haiti over the ensuing years.

These new earthquakes will likely also require massive US help in the recovery and rebuilding. President Biden has already designated USAID Administrator Samantha Power to coordinate the response. But the world must learn from the mistakes of the past: funding failing to reach Haiti, subpar coordination with the Haitian people, and a relief effort that generated dependence on the international relief community.

The coordination of recovery efforts may prove even more complex today than in 2010. Thanks to the chaos that ensured following the July presidential assassination—the first in Latin America and the Caribbean in sixty years—Haiti has already been on the world’s radar. Prime Minister Ariel Henry, the second leader since Moïse’s killing, is tasked with governing until the country can hold elections. Just days ago, presidential elections were postponed until November 7. Not only will the earthquake likely further delay voting, but it will test the ability of an unelected interim leader to rally the Haitian people and coordinate a massive Haitian response that will require substantial international assistance.

Prior to the earthquake, and even before Moïse’s assassination, kidnappings and violence were on the rise due to increased gang activity. Given the widespread unemployment and poverty that will likely result from Saturday’s event, gangs will have the opportunity to both increase their membership as well as reach. These groups have established some form of legitimacy among the population in Haiti, which means that a limited or poor response from the government and international actors could sway Haitians toward illicit organizations that are able to fill the vacuum and provide access to public goods and services.

For others, migration will be their best option. On their own, natural disasters and violence fuel displacement and migration. The combination of the two will amplify this risk, almost ensuring that Haitian migrants will begin to head to the Americas—including to US shores. Following Moïse’s assassination, Haitian migrants were already showing up across the Caribbean and as far away as Mexico and Guatemala.

The United States should seek ways to accommodate such refugees. The Biden administration has extended temporary protected status to 100,000 Haitians, allaying their fears of deportation. This will likely need to be extended as more Haitians migrate to US shores. Providing this and other accommodations as legal avenues could preemptively curb forthcoming unauthorized migration.

Providing aid packages should also be a priority—but this must look different from the 2010 aftermath. This time around, aid should be focused on recovery and capacity-building that emboldens the Haitian people and their leaders to oversee the process themselves. Although a political vacuum in Haiti still exists, aid and donor backing is likely to further legitimize Henry in the eyes of the international community and potentially with his Haitian constituents.

For Haitians to lead this process, the international community will need to use the tools at its disposal to put them in positions to implement the changes needed in Haiti. At the moment, Haiti lacks the institutions to handle the country’s complex challenges. Multiple crises require coordination and communication among all relevant international actors and the Haitian people. The United States, the United Nations, and NGOs invested in the country will need to address the on-the-ground situation by providing support to survivors and assisting Haitian security forces in their effort to combat gangs.

Groups like the Caribbean Community (CARICOM), the Organization of American States, and the Pan-American Health Organization should also work alongside the United States to think in the medium term. This means preparing the country for elections and how to address the ongoing COVID-19 pandemic. CARICOM and the US-based Haitian diaspora are in the best position to advocate for the Haitian people and Haitian-led solutions both in the United States and globally.

The situation in Haiti is complex and will need an all-hands-on-deck approach from its partners across the world. A worst-case scenario may be upon us—but even amid the devastation of the past few months, the Haitian people have proven themselves to be resilient. The long road to recovery begins now, and with it comes renewed opportunity to build back stronger.

Jason Marczak is director of the Atlantic Council’s Adrienne Arsht Latin America Center. Follow him on Twitter at @jmarczak.

Wazim Mowla is assistant director for the Caribbean Initiative at the Adrienne Arsht Latin America Center. Follow him on Twitter at @WMowla.

FAST THINKING: Why the Moïse assassination is Haiti’s worst-case scenario

The murder leaves a power vacuum atop a country battling rampant crime and COVID-19—with no obvious succession plan in place. What’s going on in Haiti and how will it reverberate across the region?

The strategic importance of sending US vaccines to the Caribbean

While the COVID-19 pandemic has created challenges across the world, it is having a disproportionate impact on countries in our hemisphere.