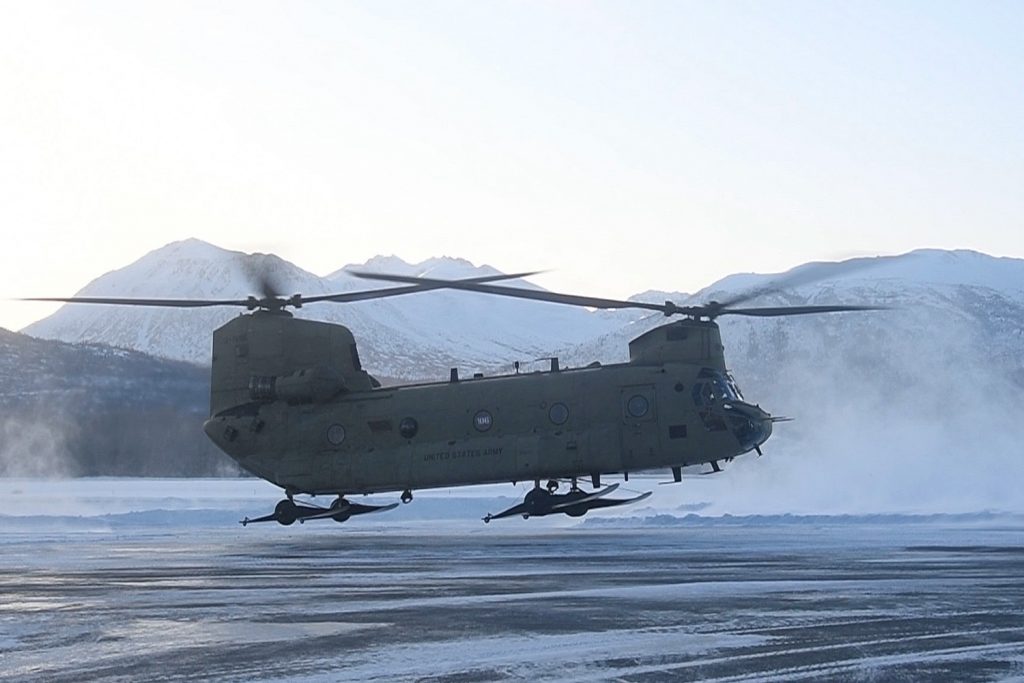 Over the past decade, Moscow and Beijing have expanded their well-worn gray zone tactics—actions just short of conventional military conflict—aimed at degrading the primacy of liberal democratic states worldwide. Nowhere have these strategic hybrid threats been more simultaneously evident than in the global far North. Despite these threats, across the transatlantic community national security policy stagnation has been common regarding the Arctic of late. Here, the stated strategic importance of the region at both the national level, and within multilateral fora (such as the Arctic Council and NATO), has not yet been matched with corresponding infrastructure investments in military, economic, and scientific research programs, each essential to balancing Russian and Chinese activities in the region.

How have we gotten here? Despite years of economic downturn, the Kremlin has reprioritized investment in strategic military infrastructure across the Russian Arctic, spanning from the Bering Strait to the Barents Sea. Highlighting this importance, President Vladimir Putin personally visited the upgraded Russian Nagurskyoe Air base in 2017, located on one of the northernmost islands of Frans Josef Land in the Russian Arctic. In August 2019, a research team led by the Russian Navy claimed the discovery of five islands within the Franz Josef Land archipelago, underscoring Moscow’s goal of sovereignty projection enabling creeping regional jurisdiction.

Economically, Moscow’s regional militarization has taken place amid rapid changes to the Arctic physical environment; the effects of climate change have resulted in northerly sea lanes largely free of icepack throughout the year. Climate effects have precipitated a rush by Moscow to develop a Northern Sea Route, linking maritime trade between the Bering and Barents. Moscow has also welcomed select cooperation by Beijing to support the route’s viability, referred to by Chinese officials as the “Polar Silk Road” and viewed as a key component of China’s broader “Belt and Road” initiative. Sino-Russian Arctic cooperation has also included energy resource development, including the Yamal liquefied natural gas (LNG) project, while Russia continues to expand its sizeable fleet of polar-class icebreakers, and China has recently launched its first domestically-produced polar-class icebreaker.

Over the same period, Beijing has also asserted political claims and made investments to project influence across the Arctic region. In January 2018, to underscore its growing claim to Arctic development, the Chinese State Council Information Office issued a white paper self-proclaiming its status as a “near-Arctic state,” and cites the United Nations Convention on the Law of the Sea (UNCLOS), the Spitsbergen Treaty, and general international law to justify its assertion of “…the freedom of rights of scientific research, navigation, overflight, fishing, laying of submarine cables and pipelines, and resource exploration and exploitation…”—a definition and legal interpretation that has been regularly challenged by the United States and other Arctic nations.

Moreover, Beijing has pursued economic investment in the critical infrastructure and extractive industries across the transatlantic Arctic; often employing aggressive tactics including predatory lending and sovereign loan guarantee structures long common in China’s engagement with African and South American nations and, more recently, along NATO’s Eastern Flank. The Chinese government has expended significant diplomatic capital to develop strategic investments in Greenland, engaging with the Greenlandic government and local communities, in part to solidify its strong position in the rare-earth and critical mineral extractives industry worldwide. These investment attempts are screened by Danish officials involved in Greenland’s foreign policy and national security process, who together have recognized that significant involvement of Chinese state-owned enterprises in the Greenlandic economy would enable Beijing to wield influence over Greenland’s affairs and have de facto influence on Arctic Council governance decisions. All while Chinese firm investments totaled nearly 12 percent of the Greenlandic gross domestic product between 2012-2017.

Like its existing and planned economic investments in Arctic critical infrastructure developed through the “Polar Silk Road,” Beijing has led the development and deployment of significant, permanent scientific research stations and infrastructure across the northern Atlantic, thereby increasing its physical presence across the region—including on the territory of NATO Allies Norway and Iceland. In 2003, the Chinese government opened the Arctic Yellow River Station on the Norwegian island of Svalbard and has built on this presence recently with the October 2018 opening of the China-Iceland Arctic Science Observatory (CIAO)—a permanent scientific installation dedicated to a wide spectrum of research objectives, including geomagnetic field measurements, aurora observations, climatology, glaciology, oceanography, and biology.

Such investments have raised critical national security concerns among some northern European nations. This includes a collaboration between Chinese Ministry of Natural Resources’ “Arctic Environment Satellite and Numerical Weather Forecasting” project and Sweden’s Kiruna satellite receiving station, which has been criticized as a possible platform for advancing Chinese military intelligence operations. Concerns over the potential dual-use of Chinese permanent infrastructure investments has also extended to Greenland; including China’s efforts to upgrade three new airfields, which were ultimately blocked by Copenhagen after it opted to provide its own investment in the facilities.

To its credit, the United States has initiated steps to increase its own strategic security interests in the Arctic, however these have yet not matched the range of investment activities made by Russia and China. Washington has begun movement toward investment in much-needed polar-class icebreakers to aid Arctic operations of US Navy and Coast Guard vessels, and has chaired the Arctic Council. And the US Air Force released its first ever Arctic-specific strategy; public acknowledgement by the Pentagon that the changing physical environment across the region is driving a rapidly-evolving security environment.

As Washington and Brussels look toward next steps in security and civil infrastructure development and investment across the Arctic, they must also reinvest and expand their permanent scientific infrastructure presence in the region. Unlike robust US investments in permanent scientific research facilities in other remote environments, Washington has thus far not matched these initiatives with parallel investments in the Arctic. Compared with the assertive scientific facility investments made by China in Svalbard and Iceland, the United States still only operates a handful of research camps across the Arctic. And despite the growing scientific and strategic importance of the region, the last time the US government opened a new major research facility in the Arctic was 1989, when it established the National Science Foundation (NSF)-administered Summit Station, a high-altitude site on the northern Greenlandic ice sheet.

The United States Arctic Research Commission (USARC), points out that while the United States continues to support a wide array of scientific research activities across the Arctic, these are as yet not supported by the established of new or expanded permanent infrastructure. In fact, the USARC calls for increased funding of “…demonstration projects to address engineering design of Arctic infrastructure.” This is key: the technical realities of the design, deployment, and operations of permanent infrastructure facilities and instrumentation in the polar regions presents unique technical challenges, ranging from extreme weather conditions and temperatures to the reality of building and maintaining permanent structures on constantly evolving ice sheets. Even a task that would be straightforward in a temperate climate—say, constructing a small lab building—requires specialized knowhow. For example, such a structure includes unique engineering requirements, like jacking mechanisms to allow the structure to be raised to the level of the accumulated snow grade each year, as well as precise knowledge on snow packing densities that ensure building footers are well grounded in the absence of a soil or bedrock anchoring used in standard construction. Unique challenges like these are found throughout all aspects of the operations, communications, and logistics supply chains needed to run Arctic infrastructure.

These challenges are indeed encountered at the limited array of existing US Arctic facilities like Greenland Summit Station. The site continues apace with science operations, but could be expanded in a more robust funding environment, and could therefore support infrastructure for larger-scale transatlantic science collaboration in the future. Ultimately, Summit Station could be a facility with increased support and logistical infrastructure at the level of US facilities in the Antarctic, though current funding levels have not yet enabled such development. To move forward, the United States and Europe should continue the longstanding tradition of leveraging the significant intellectual capital and practical experience that has been developed during seventy years of advancing scientific infrastructure in Antarctica.*

Washington and Brussels should also harness the enthusiasm of its own science community, as US and European researchers continue to press for increased access to the Greenlandic ice sheet. Even with its limitations, resulting research has yielded important gains for increasing specialized expertise on what will be needed for a future of increased Greenlandic operations. The deployment of an expanded Summit Station, in addition to other facilities in the global far north, is not merely a plea from the US science community. The Greenlandic and Danish governments continue to call for Western—specifically US—foreign direct investment across a variety of sectors in Greenland, including the deployment of research facilities supported by improved logistics. The Danish government identified such a need for increased science infrastructure in its most recent Strategy for the Arctic, stating that “…research and monitoring in the Arctic puts a strain on resources and logistics and therefore international cooperation on such projects must continue to be encouraged…”

An increased scientific infrastructure presence in the transatlantic Arctic will allow US and European researchers to share their intellectual and operational experience with policymakers and private sector contracting partners. This will in turn increase transatlantic capacity and practical knowhow on best practices for deploying and operating large-scale critical infrastructure in the Arctic across a myriad of other fields central to mirroring recent strategic moves taken by Russia and China—and at a price tag far lower than a focus on purely commercial or military infrastructure investments. Taken together with other initiatives, this multidisciplinary effort will contribute to transatlantic policy goals to extend US and European physical presence across the region, and should be a key consideration as the Biden administration begins to plot and execute its national security strategy in the coming months and years.

Dr. Benjamin L. Schmitt is a postdoctoral fellow at Harvard University, a senior fellow at the Center for European Policy Analysis, and a former European Energy Security advisor at the US Department of State. You can follow Benjamin on Twitter at @BLSchmitt.

*This paragraph was updated on November 23 to correct an error in describing the operations of Summit Station.