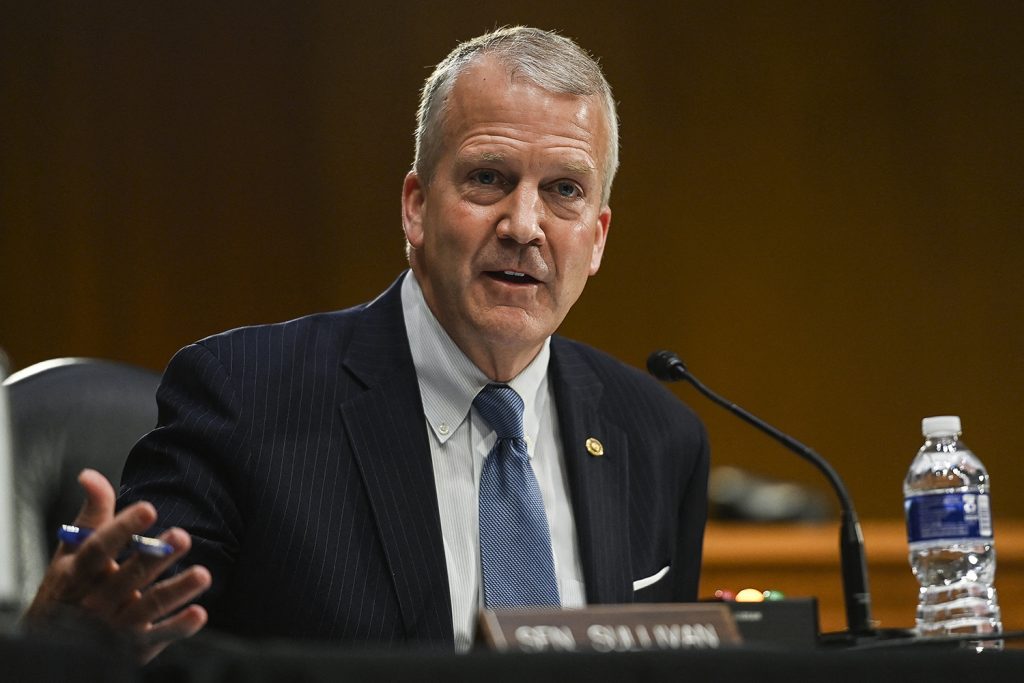 Last week, US and Chinese officials gathered in Anchorage for their first high-level meeting during the Biden administration. Reflecting on the dramatic encounter in his home state of Alaska, US Senator Dan Sullivan noted that the public exchange was “as chilly as the Alaska air outside.” But it represented “a realistic start to the relationship,” he added, “and that’s what we need.”

Sullivan’s comments came in conversation with Fred Kempe, president and CEO of the Atlantic Council, during a March 22 Atlantic Council Front Page event. The event focused on the state of relations between the world’s two largest economies and followed the release of three recent Council reports that dove deep on China strategy: “The Longer Telegram: Toward a new American China strategy,” written by an anonymous former senior government official, and “Global strategy 2021: An allied strategy for China” along with “The China plan: A transatlantic blueprint for strategic competition.”

Sullivan said that Alaska, which he has represented in the Senate since 2015, is “in many ways an Asia-Pacific state” whose geographical position and energy-based economy make it a crucial outpost for the United States given its interests in the region.

“[Chinese President] Xi Jinping loves to use this phrase, ‘Asia for Asians,’ which is kind of a subtle way to say, ‘America, get out of here.’ Well, here [are] the facts,” Sullivan said. “We’ve been in Asia as a nation in many ways for over two hundred years. Anchorage is closer to Tokyo than it is to Washington, DC.”

During the George W. Bush administration, Sullivan participated in the US-China Strategic and Economic Dialogue as the lead State Department official. He noted that “different Americans at different points in their own personal experience have had this awakening that I refer to as ‘promise fatigue.’ I’ve been in so many meetings where I’ve seen Chinese presidents… promise things to American officials, and they almost never follow through.”

Sullivan credits the Trump administration with “awakening” officials in Washington to the urgency of dealing with the threat posed by China.

“When I came to the Senate six years ago, I started giving speeches about… how we need to focus on China. To be honest, I was surprised how little there was in terms of a focus,” he said. “The good news is you can’t give that speech now. Everybody in DC is focused on China.”

Sullivan said that the Biden administration must consider “how we can deal with China from positions of strength,” which will involve mending America’s political divisions. “The Chinese, clearly, if you read the open-source materials… they think they’re rising and we’re declining in large measure because of our political divide,” he noted.

Sullivan argued that the United States is, in fact, already operating from several positions of strength. One, he said, is the “bipartisan awakening” that’s happening on China and another is its “network of alliances” relative to China, which “is ally-poor.” On this score, he commended the Biden administration for its recent leaders’ meeting of the Quad, which consists of Australia, India, Japan, and the United States. America’s two other big advantages over China are its military strength and its role as “the world’s energy superpower,” he explained.

Yet Sullivan also criticized US President Joe Biden’s moves “to unilaterally restrict American energy production” because it “makes zero sense for jobs, for the environment, for our foreign policy, and [for] national security.” Regarding his critique of Biden’s decision to revoke a permit behind the construction of the Keystone XL pipeline, Sullivan said that the United States “has the highest standards of energy production in the world,” which means there is every reason to produce energy “in a country like ours, where it gives [us] a comparative advantage.”

Constricting production of US energy, Sullivan added, could boost the country’s imports “from Russia, from Venezuela, from Saudi Arabia… We should not be unilaterally disarming ourselves on this great comparative advantage that the Chinese know we have.”

When asked about the idea of exporting liquified natural gas (LNG) to China as a national-security tool, Sullivan stressed that in exporting LNG his “priority would be to our allies,” noting that “there’s an enormous strategic opportunity” to export LNG to countries like Japan and India. He added that once allies have the supplies they need, he thinks it sensible to export to China as well. “It could bring cooperation on an important issue,” help reduce the US trade deficit with China, and help China reduce its greenhouse-gas emissions, he explained.

As part of a new American China strategy, the United States will “need to be very clear about declaring what our red lines are… and what our strategic interest are,” said Sullivan, adding that he thinks such an approach would help “keep the peace.” He commended “The Longer Telegram” for articulating “those red lines and strategic interests very, very well.”

Sullivan compared the current US standoff with China to the situation that the United States faced in the post-World War II period. “We recognized then we had a big challenge with the Soviet Union,” he said. “You had the Truman administration working with Republican senators, putting together a strategy… that ended up winning the Cold War. I think we can do that again.”

But he cautioned that the threats China poses today are nevertheless different than those presented by the Soviet Union. “It’s not the same as the Cold War with the Soviet Union… I think it’s its own Cold War. We need to recognize it, we need to prepare for it, and we need to work with our allies to deal with it.”

Transcript: Dan Sullivan on ‘The Longer Telegram’ and the need for a new American China strategy

The senator from Alaska discussed the key pillars of an American China strategy and the significance of the US-China meeting in Anchorage.

“Americans can prevail in this long-term geopolitical and ideological contest. But doing so will require a new level of strategic initiative, organization, and confidence in who we are and what we stand for,” Sen. Dan Sullivan said.