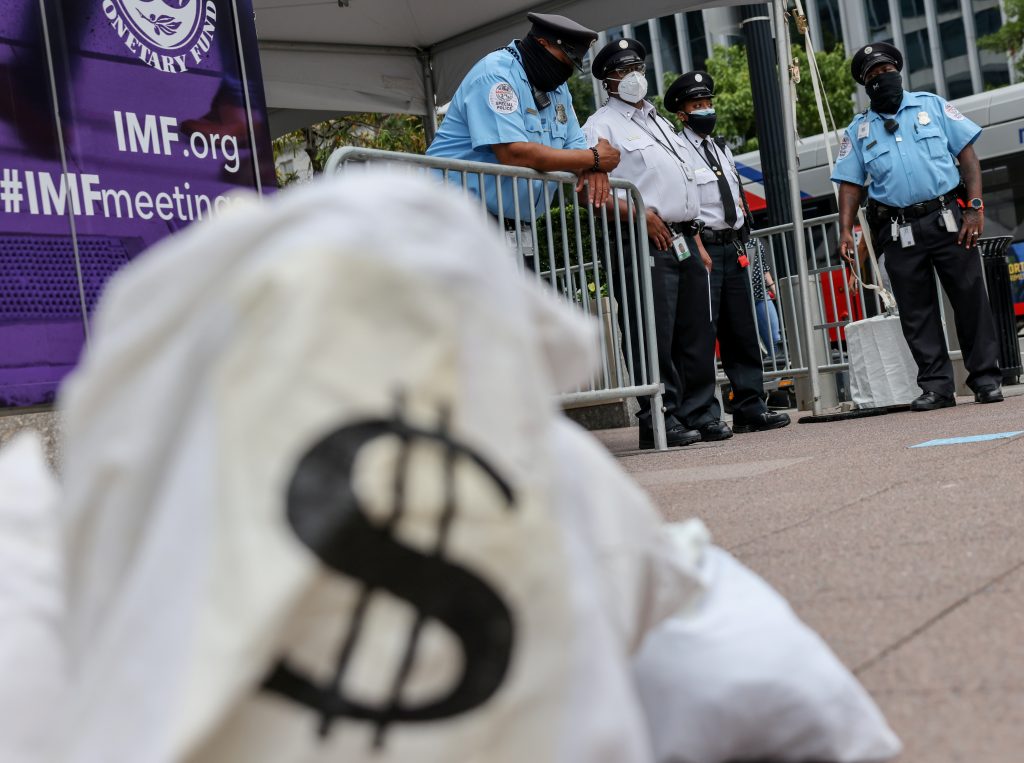 Last week’s gathering of International Monetary Fund (IMF) and World Bank officials for their annual meetings and Group of Twenty (G20) policy discussions could have produced initiatives to address global economic threats such as COVID-19 and ballooning debt levels in low-income countries.

The events were overshadowed by the drama surrounding IMF Managing Director Kristalina Georgieva—who was implicated in the manipulation of data at the World Bank. But it also was a missed opportunity, marked by lengthy communiqués that expressed support for those hit hardest by the pandemic. Countries that remain on life support came away largely empty-handed.

Despite the IMF’s flagship World Economic Outlook revising downward its growth forecast for low-income developing countries, the G20 finance ministers’ communiqué lauded the IMF’s issuance of $650 billion in Special Drawing Rights (SDRs) to its membership in August. That program is aimed at giving countries more resources to respond to the crisis, but the wealthy G20 countries themselves were the major recipients of the allocation because the SDRs were divided to reflect each country’s weight in the global economy.

That meant African countries received only $33.6 billion—an amount that Senegalese President Macky Sall dismissed as “a drop of water.”

A new IMF lending facility called the Resilience and Sustainability Trust (RST) will “provide affordable long-term financing,” according to the communiqué, to help countries reduce pandemic- and climate change-related risks. Along with the low-income countries, it could also give loans to middle-income states that are ineligible for the existing Poverty Reduction and Growth Trust (PRGT) facility that has provided interest-free loans to low-income countries during the pandemic.

But there’s a catch: The communiqué says the RST will need to be funded with SDR donations “channeled” from rich countries—the mechanism for which remains mired in negotiations. On this sticking point, the G20 merely “appreciate[d] the recent progress by the IMF,” with no timeline for putting to use the funds they’re expected to provide.

Along with the new mechanism, the IMF will also go hat-in-hand to its membership to rebuild funding for two other assistance programs for low-income countries that face pandemic-driven shortfalls: the PRGT and the Catastrophe Containment and Relief Trust.

Until the needs of these two programs are met, it would be a mistake to drain the limited SDR resources available from the international community for purposes such as climate-change remediation and pandemics—as important as they are—which IMF staff estimate could amount to thirty to fifty billion dollars of loan demand over ten years.

The reality is simple: The IMF cannot afford to be all things for all countries.

The IMF communiqué also addressed the critical shortage of COVID-19 vaccines in developing countries, pledging that member countries would “take steps” to boost supplies and “remove relevant supply and financing constraints.” The IMF, along with other international organizations, says it will support the vaccination of at least 40 percent of the world’s population by the end of the year and 70 percent by mid-2022.

Yet the World Health Organization estimates that only 4 percent of Africa’s population has been fully vaccinated—with six-of-seven infections currently going undetected across the region. Between the developing world’s shortage of vaccines and its inadequate infrastructure to dispense them, these vaccination targets will prove illusory.

This issue looms large partly because the G20 governments have decided not to extend the Debt Service Suspension Initiative (DSSI)—which enabled more than forty countries to suspend debt-service payments amid the pandemic—beyond December 31. But by one estimate, less than one-quarter of these countries’ obligations have been suspended; they still paid out $36.4 billion since the start of the pandemic, but largely to commercial creditors who never participated in the DSSI.

The international community also did nothing to strengthen implementation of the Common Framework for Debt Treatment, a G20 program adopted last year to enable debt restructuring for low-income countries which has been an abject failure. Three countries—Chad, Ethiopia, and Zambia—have sought debt relief through the program, but little progress has been made.

In Chad, government creditors have agreed on a restructuring arrangement, but progress has stalled because commercial creditors led by commodities giant Glencore are dragging their feet in negotiations that represent about 40 percent of the country’s obligations—most of it lent in exchange for control of oil-export revenue. In response, the IMF and World Bank took the unusual step of publicly calling on Glencore and other private creditors to commit to debt talks “without delay.”

China also has been a roadblock—signing onto the DSSI and Common Framework, and stating its support for international cooperation on the issue, but sometimes pursuing a unilateral approach that runs counter to the G20 agreement. For example, China’s state-run Export-Import Bank initially granted Kenya a debt-service moratorium for infrastructure loans, but in June the bank demanded that payments resume after the Kenyan government asked for an extension.

Analysts point to a lack of coordination among Chinese lending institutions and the need to educate Chinese officials about international norms. But a government that’s forced its tech giants to change business practices is well-positioned to also encourage rapid change in overseas lending practices—if it wants to.

China’s policies also have reinforced Western commercial creditors’ resistance to the DSSI and Common Framework. Ever mindful of the potential impact of credit rating agencies’ decisions on their loan portfolios, international banks and bondholders have been careful about any actions that would result in their ratings being downgraded.

For now, the only source of funding for indebted countries will be the IMF and World Bank. Some observers maintain that IMF lending could cause private creditors to restrain future lending. But there’s no evidence that this crowds out the private sector; in fact, history shows that IMF loans fuel confidence in it.

So where does the inaction from the international community leave developing countries?

Their true lifeline comes from the sharp rise in commodity prices in recent months as advanced economies recover from the pandemic. Crude oil is above $80 a barrel—its highest price in three years—and various metals are at historic levels. But those same high prices also pose a threat to resource-poor countries, especially oil importers, while recent increases in food prices raise the prospect of social instability.

That’s why the IMF and G20’s recent pronouncements were disappointing. G20 leaders will hold their annual summit in Rome at the end of the month, but there is little expectation that the situation will change by then. So, with the IMF still trying to figure out how to effectively divide the SDR pie and no prospect of meaningful debt relief, low-income countries are left waiting for vaccines and hoping to survive a crisis that refuses to fade away.

Jeremy Mark is a senior fellow with the Atlantic Council’s Geoeconomics Center. He previously worked for the IMF and the Asian Wall Street Journal. Follow him on Twitter: @JedMark888.

Vasuki Shastry, formerly with the IMF, Monetary Authority of Singapore, and Standard Chartered Bank, is the author of Has Asia Lost It? Dynamic Past, Turbulent Future. Follow him on Twitter: @vshastry.

When the G20 finance ministers and central bank governors meet July 9 and 10 in Venice, Italy, they have an opportunity to respond to Africa’s third-wave crisis in a meaningful way. Will they take it?

By Niels Graham and William Howlett

Image: Bags of money sit on the sidewalk outside the IMF-World Bank headquarters in Washington during a demonstration calling for finance action, October 13, 2021. Photo by Evelyn Hockstein/Reuters.