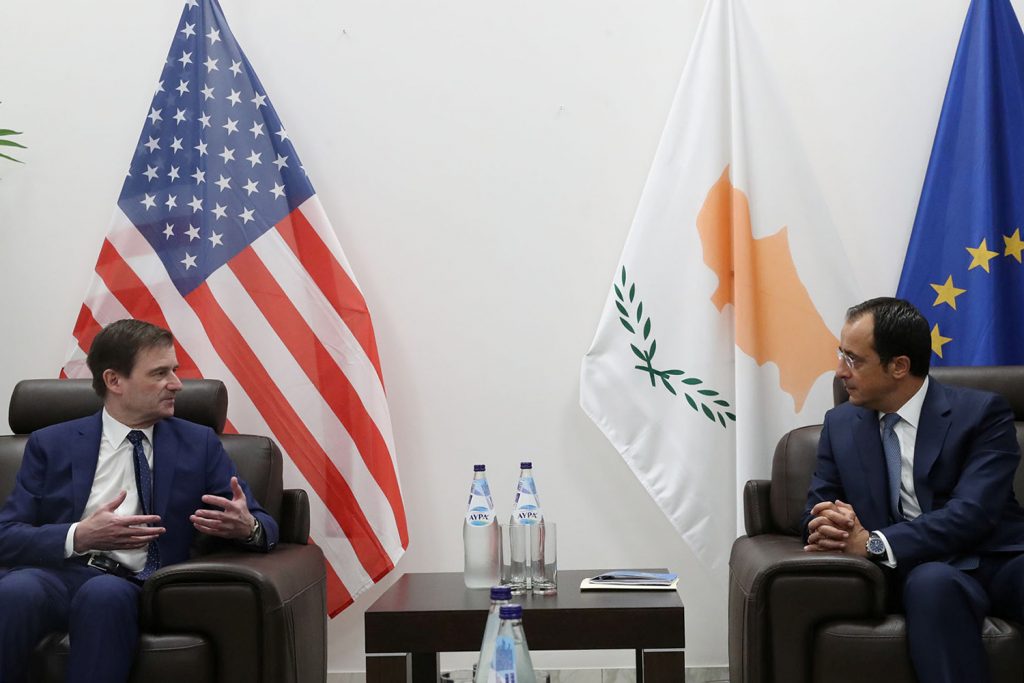 In March 2014, the tanker Morning Glory broke down in the Eastern Mediterranean near Cyprus with a cargo full of illicit oil. Libyan rebels were in command, holding the crew hostage, and potentially trying to deliver the shipment to Syria to fuel its own civil war. At the request of the Cypriot and Libyan governments, the United States sent US Navy SEALs to storm the ship. Three years earlier, the EDRO III, which was carrying gypsum, struck rocks off the coast of Cyprus during a severe storm. The crew was rescued by a British military helicopter.

The Eastern Mediterranean is busy. It can be dangerous. Too often it is a crossroads for illicit activity that evades regional governments. The United States needs capable partners in the region. The Republic of Cyprus is a democratic, European Union (EU) outpost in a difficult neighborhood, just a short distance from Syria. And under President Nicos Anastasiades, it has been drawing closer to the United States in an era of great-power competition.

This is why on September 1 the US government announced it will waive for one fiscal year restrictions that prevent the direct commercial sale of non-lethal security articles and services to the Republic of Cyprus. (The waiver is renewable.) A Republic of Cyprus that has more accurate radar, search-and-rescue capabilities, and maritime-surveillance equipment can be a better partner of the United States and other nations in the Eastern Mediterranean where we share common interests.

US Secretary of State Mike Pompeo called President Anastasiades to inform him of this decision, which importantly in the current political environment in the United States enjoys bipartisan support. Called for in legislation championed by Senator Bob Menendez (D-NJ) and Senator Marco Rubio (R-FL), this move rescinds so-called International Traffic in Arms Regulations (ITAR) restrictions placed on Cyprus in 1987.

Since then, Nicosia has been blocked from purchasing advanced military equipment or technology from the United States. The policy was meant to avoid prejudicing negotiations to resolve the division of the island. Unfortunately, settlement talks remain stalled. While the US position on a settlement has not changed, as the geopolitical circumstances in the region evolve, the United States’ policy is changing too in order to better compete for positive influence.

Despite what some sensational media outlets in the region will argue, this US decision is not about arming the Republic of Cyprus as tensions mount between Turkey and Greece. “This decision is not about Turkey,” one US official insisted. Rather, this is about helping a democratic EU partner become more capable in shouldering its share of the burden when it comes to transnational security challenges in the region: from counter-proliferation and counter-trafficking, to search-and-rescue and 360-degree surveillance. It is also about weening the island off of Russian equipment, finance, and port calls.

Nonetheless, the announcement comes at a volatile time in the region—as Athens and Ankara argue over maritime claims, and as Turkey continues naval exploration of hydrocarbon deposits off the shores of Cyprus. While some in the region will perceive or want to trumpet the decision as Washington weighing in on the current tensions, the Trump administration has underscored that this move does not change the US position on a Cyprus settlement or on the present Greece-Turkey standoff.

Instead, the September 1 announcement is the product of a years-long reassessment of US interests in the Eastern Mediterranean, provoked by Russia emerging as a major regional actor operating out of Syria, including the Mediterranean port at Latakia. Chinese vessels have even joined Russian naval ships for joint exercises in the Mediterranean.

This reassessment, once led by former US Assistant Secretary of State Wess Mitchell within government and enjoying bipartisan support in Congress, views the Republic of Cyprus as a frontline democratic state in a battle for influence in a region where geopolitics have returned. The stymied settlement talks and Turkey’s own hedging have only expanded political support in the United States for this approach.

This view is reflected in then-Vice President Joe Biden confirming a “strategic partnership” with the Republic of Cyprus in 2014, continued with a significant Statement of Intent on security cooperation signed by former Assistant Secretary Mitchell and Foreign Minister Nikos Christodoulides in 2018, and followed by the landmark Eastern Mediterranean Security and Energy Partnership Act of 2019. The September 1 announcement also builds on an earlier US decision this summer to extend valuable International Military Education and Training (IMET) to the Republic of Cyprus for the first time.

The specific review that led to this decision has been in the works for some time. US officials told me that they considered whether to hold off on making the announcement given the current tensions, but ultimately recognized that the timing for the move would likely never be good given the dynamics in the Eastern Mediterranean. Turkey has announced naval surveying off Cyprus for the next ninety days, for example, meaning heightened tensions will persist.

The United States does have a responsibility to step up its mediation in the region, especially between its two NATO allies Greece and Turkey. Washington is backing the German push for a return to dialogue between Athens and Ankara, encouraging disengagement at sea, and discouraging further provocative hydrocarbon exploration. In another era, US diplomacy would be in the lead on this issue as well.

For years, the Cypriots have made lifting ITAR restrictions (often called simply an arms embargo) their top request to the United States. Many on the island viewed this ban as a stigma. But Nicosia was slow to build the case by spelling out exactly what its needs were. The test for Nicosia now will be to articulate what its maritime-security, anti-trafficking, and counter-terrorism interests are, and to identify what non-lethal equipment is necessary to help them achieve their goals. We’re talking radios and secure communications, not bullets and attack helicopters.

The decision is a victory nonetheless for President Anastasiades and his government. He was first elected in 2013, with a commitment to forge a much closer relationship with the United States and an aspiration for stronger ties with NATO. He carried out the most dramatic shift in Cypriot foreign-policy orientation in its recent political history. While the grave financial crisis at the start of his term delayed his pursuit of some of these foreign-policy objectives, his economic measures—including a concerted effort to stem illicit financing—have served to align the country within the norms of the EU.

What is at stake is the durability of the Anastasiades government’s foreign policies and the enduring security of the island. Nicosia should reciprocate this US decision by acting to ensure its policies become accepted as long-term Cypriot strategy, institutionalizing a lasting foreign-policy legacy and strategic vision for a Cyprus firmly embedded in a Europe that is whole, free, and at peace. To do so, the government of the Republic of Cyprus should develop and publish a public national security strategy that builds confidence in its actions, recommit to settlement talks, develop its own road map for a strategic partnership with the United States, and take the initiative to front-load preparation for NATO’s Partnership for Peace even though accession hinges on broader political issues.

Anastasiades’s bet was that his policies would more firmly embed Cyprus within the transatlantic community and open new opportunities for cooperation with the United States as well as NATO. That is happening.

With NATO membership built into any settlement, Greek and Turkish Cypriot communities, along with Athens and Ankara, and in partnership with all of their European partners and NATO allies, might have more confidence in striking a deal.

Image: Cypriot Foreign Minister Nikos Christodoulides and U.S. Under Secretary of State for Political Affairs David Hale are seen during a meeting at the Larnaca airport, Cyprus August 16, 2020. Christos Avraamides/Courtesy of PIO/Handout via REUTERS