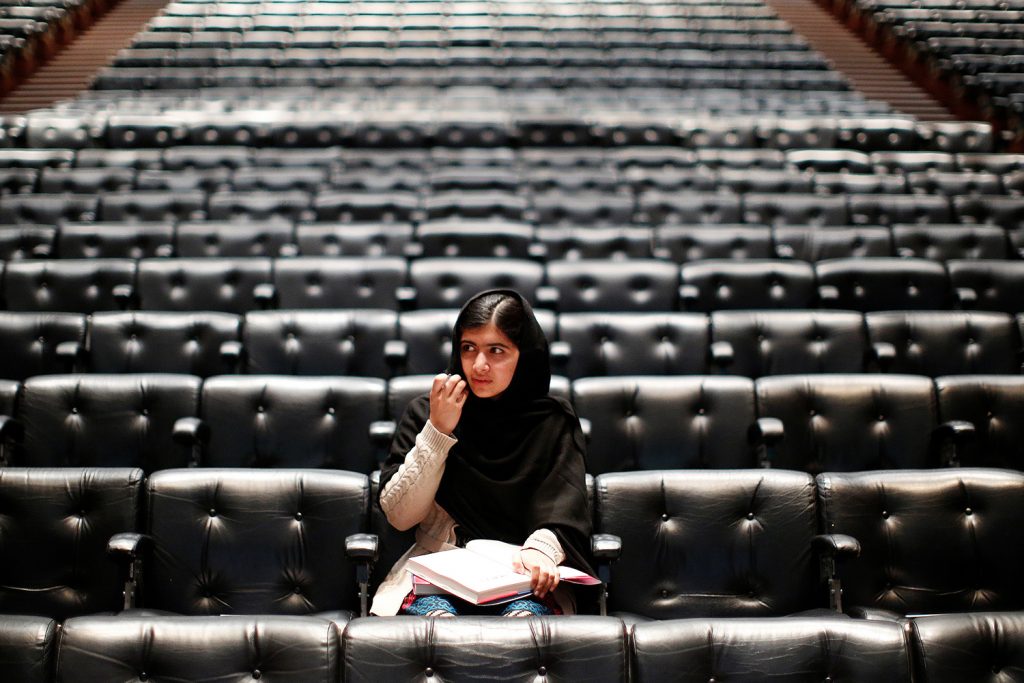 There were already 130 million girls out of school worldwide before the COVID-19 crisis, and an estimated twenty million more may never return to their classrooms once the pandemic is over, warned female-education activist Malala Yousafzai.

Malala, a recipient of the Atlantic Council’s 2013 Freedom Award as well as the youngest Nobel Peace Prize laureate, spoke about her activism at an Atlantic Council Front Page event moderated by Shuja Nawaz, distinguished fellow at the Council’s South Asia Center.

Speaking three days before International Women’s Day, Malala focused on her lifelong struggle to promote the education of girls ever since she was targeted in a 2012 assassination attempt by Taliban gunmen in retaliation for her activism.

“Girls’ education is a critical issue, and the Malala Fund has been working on highlighting this for many years now,” she said, recalling the day in January 2008 that she learned, as an eleven-year-old child in Pakistan’s Swat Valley, that local Taliban members, who had already prohibited TV ownership and playing music, had also permanently banned education for girls.

“I cried the whole day, and I was questioning my dad what would be my future if I could not go to school,” Malala said. “I knew what had happened to many girls who were deprived of education. They had been pushed into early child marriages, or into domestic labor, or kept limited to their household and not allowed to achieve their dreams.”

The Malala Fund, which she co-founded in 2014 along with her father, Ziauddin Yousafzai, currently supports fifty-seven “education champions” in eight countries: Afghanistan, Brazil, Ethiopia, India, Lebanon, Nigeria, Pakistan, and Turkey.

Over the next two years, the Malala Fund plans to invest $7.8 million to address the immediate and long-term implications of the pandemic on girls’ education. The investment will aim to keep girls learning despite school closures by supporting teachers with the resources and training they need to deliver quality education, while strengthening educational systems against future crises.

Since its founding, the Malala Fund has focused on improving the quality of education rather than a more traditional brick-and-mortar approach of constructing schools in developing countries, including her native Pakistan.

“We want women to have the opportunity to participate in the economy, to participate in politics, and other areas,” Malala said, noting that education alone allows women and girls to become financially independent.

While education itself is important, awareness of women’s rights is also critical, especially in societies where women are treated as second-class citizens.

The Malala Fund aims to support the work of local activists around the world because real change for girls’ education, she said, happens at the local level—whether it’s helping Nigerian girls receive their lessons via radio during the coronavirus lockdown or giving young girls in Afghanistan access to schoolwork through mobile phones.

“It’s a long process and you may not see the outcomes soon,” she said. “You have to have faith that it will happen if you keep pushing for it.”

Malala said recent research in Pakistan’s Punjabi province shows that during the lockdown, girls were nine times more likely to spend time on chores than on schoolwork. That could wipe out advances made over the last several decades and lead to catastrophic consequences, she warned.

“The pandemic has pushed girls to stay at home, and when girls are at home, they’re pushed into housework, or they become financial supporters of the family, or they’re pushed into early childhood marriages because that reduces the burden on the family,” she said. “And if they can afford the education of only one child, [families] often prefer to support their boys [rather] than their girls.”

Only 13 percent of girls in primary school in Pakistan will make it to ninth grade, meaning the focus must be on keeping them in class long enough for them to receive secondary education.

“We need to ensure that we grant twelve years of safe, quality education to all girls and put a specific focus on secondary education, so we reduce the dropout of girls, and also make sure that girls who do drop out can return to school if they decide to, even if this pandemic time,” Malala said, adding that despite the presence of more than 25,000 madrasas, or Islamic religious schools, in her country, the vast majority of them are aimed at boys’ education.

“Madrasas only cover [the] Quran and religious content. They do not cover science, math, the arts, or languages other than Arabic, unfortunately. So madrasas right now are not able to provide school-level education,” she said, urging the Pakistani government to give serious attention to the issue of gender parity in schooling “and ensure that we promote a system of education which is inclusive.”

Taliban 2.0. – Have the Taliban really changed and learnt their lesson?

Image: Pakistani teenage activist Malala Yousafzai, who was shot in the head by the Taliban for campaigning for girls' education, signs a copy of her book before an event launching her memoir, "I Am Malala", at the Southbank Centre in central London, Britain, October 20, 2013. Picture taken October 20, 2013. REUTERS/Olivia Harris/Reuters