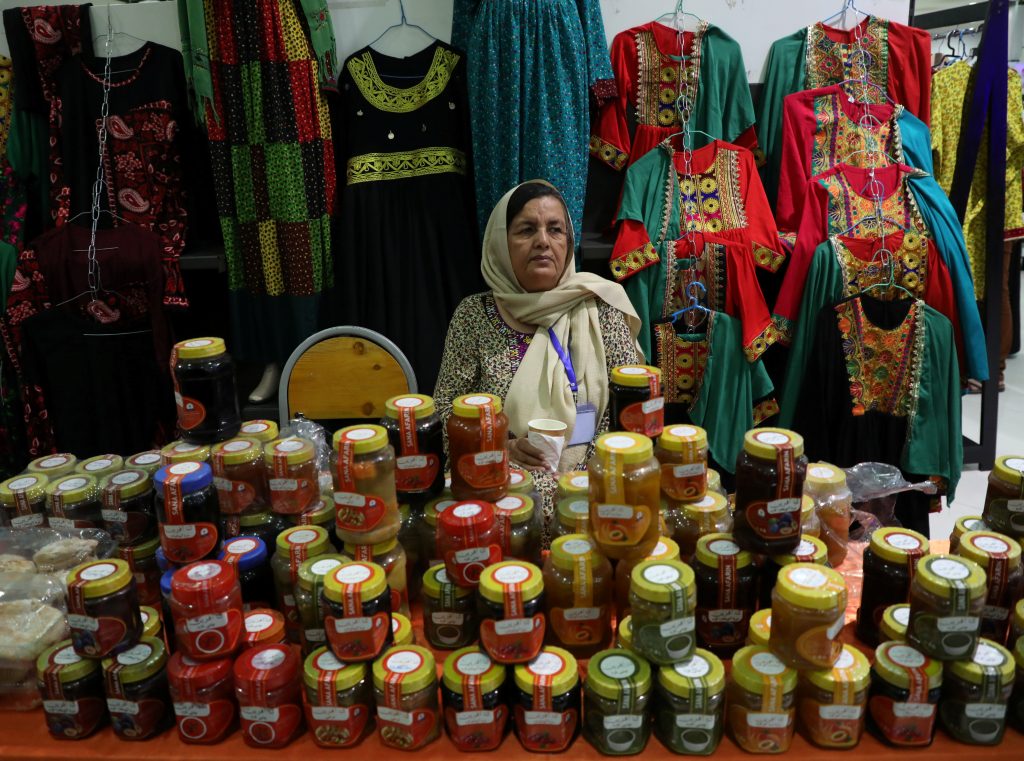 After reiterating the importance of Afghan women’s inclusion in the negotiations, Ambassador Dobriansky asked Ambassador Currie about public-private partnerships and their role in the economic development of women in Afghanistan. Ambassador Currie explained the impact that USAWC has had on the lives of Afghan women by connecting policy initiatives to the grassroots level. She mentioned how the Women’s Global Development and Prosperity Initiative leverages private companies in the United States to drive peace and prosperity in Afghanistan.

Ambassador Dobriansky then turned to Ambassador Rahmani to inquire how women’s gains have driven peace and security in the region. To this, the Ambassador responded that women’s gains have come to define the scope of peace and security in Afghanistan today and will continue doing so in the future. She listed the tangible ways in which women’s gains have achieved this: 1) Women’s inclusion in different spheres have brought societal issues to the forefront, 2) A peace deal excluding women would not be sustainable as women build consensus, bring attention to core societal issues, and foster empathy and understanding, thereby driving peace and security, and 3) Women’s participation in a peace deal would bring about non-militaristic approaches to conflict resolution, rendering it more effective.

In response to Ambassador Dobrianskly’s question concerning the ways in which women’s economic gains have driven peace and security, Ambassador Rahmani pointed out how economic development and peace and security are directly proportional. As women are likely to spend more on health care and education, she argued, their economic gains would shape Afghanistan’s spending pattern in socially beneficial ways. Ambassador Rahmani asserted that the focus on women’s empowerment shouldn’t be limited to the economic aspect, but should be a holistic approach that enables their social and political empowerment as well.

Ambassador Dobriansky then turned to Brigadier General Kimberly Colloton to share insights with her background as a military officer posted on the ground in Afghanistan. Specifically, she touched on BG Colloton’s role in overseeing infrastructure projects in the country and how they have allowed her to empower Afghan women. BG Colloton talked about utilizing her skills and experiences in pursuit of this goal, made possible by the support and dedication of 38 countries and organizations including the US, NATO, and e Afghanistan’s women. Additionally, she underscored the importance of civilian-military collaboration in the implementation of projects and training assistance provided to Afghan women to support them.

The conversation then moved to Connie Duckworth, who expressed a strong belief that jobs are more important than education. It is for this reason that ARZU supports the lifting of Afghan women weavers from poverty. Ms. Duckworth believes that women’s jobs raise their self-esteem and uplift the community, and concludes by talking about future ARZU endeavors related to sustainable tourism and cultural restoration.

Ms. Razia Jan then shifted the focus from jobs to education, expressing her belief that education is a tool that can change lives. As a founder of a 100% free girls school in Afghanistan, Ms. Jan’s educational programs succeeded in bringing 800 students into school, saw 6 classes graduate, and initiated an institute nearby for girls to obtain technical skills after school.

Addressing a question from the audience regarding the role of men in the advancement of women, Ms. Jan mentioned how the quality of men’s lives have improved now that their young girls are able to read, and provided an anecdote of a father who waitlisted his daughter for school in 2026, thus highlighting the shifting mindset in men. She concluded by listing some achievements of the girls who have joined her school, demonstrating the transformational power of providing educational opportunities to women.

Another audience member queried about the difference in the outcome of the peace deal in rural and urban areas, to which Ambassador Rahmani responded that it would depend on what the outcome is. If the peace deal is practical and viable, then it would be applicable to both settings, as she argued that most Afghans want similar things. The next question inquired if inadequate access to health care and workplace impedes the advancement of Afghan women. BG Colloton recognized this to be a real challenge, and mentioned the importance of creating roads in strategic locations and investing in accessible power in Afghanistan.

Ms. Sara Greengrass – Executive Director of USAWC – closed the event by driving home the message that the gains of women are indeed a crucial factor for peace and security in Afghanistan.

Women’s gains in Afghanistan: Supporting economic opportunities for Afghan women as a driver of peace and security

The Atlantic Council, in partnership with the US-Afghan Women’s Council and the American Council on Women, Peace and Security, hosts a conversation about the gains that women have made in Afghanistan, the critical role of Afghan women in Afghanistan’s peace and security, and the role US actors have in partnering with and empowering Afghan women.

Taliban 2.0. – Have the Taliban really changed and learnt their lesson?

To succeed, intra-Afghan talks must defer to the non-ideal

The negotiations between the Afghan government and the Taliban should just as much center on the question of whether we should ground political morality in a vision of a distinct Islamic polity (that of the Taliban or the Afghan government), or a non-ideal mode of Islamic governance reflecting the second-order and third-order preferences of the parties.