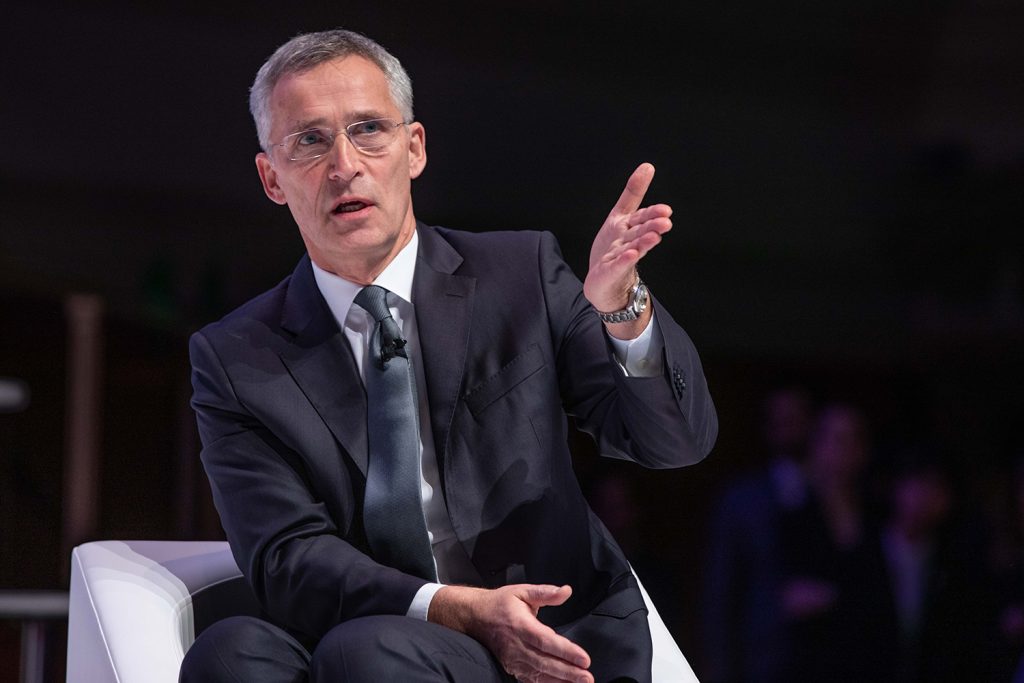 When French President Emmanuel Macron warned of “the brain death of NATO” last month, it was widely seen as yet another damaging public rift for the Alliance. But NATO Secretary General Jens Stoltenberg had a clear message on December 3, one day before NATO leaders meet in London: actions speak louder than words.

“When you look at NATO, you see that we are actually delivering,” Stoltenberg said at the NATO Engages — London 2019 event, cohosted by the Atlantic Council. “For the first time in our history, we have combat-ready troops in the eastern part of the Alliance,” he continued. “We have tripled the size of the NATO Response Force—we are able to reinforce if needed. We invest in high-end capabilities, we step up in the fight against terrorism, in the new training mission in Iraq, and European allies are investing more in defense. So if you just look at the substance, you can see that this Alliance is delivering.”

Macron’s remarks are not the only NATO disagreement currently in the public eye. Earlier on December 3, Turkish President Recep Tayyip Erdoğan demanded that NATO “recognize as terrorist organizations those we consider terrorist organizations” and threatened to block the Alliance’s plans for an expanded defense of the Baltics over the issue.

The BBC’s Lyse Doucet, who moderated the conversation with Stoltenberg, pressed the secretary general about whether “NATO’s credibility has been dented by these very public rows about even your founding principle—all for one and one for all.” But Stoltenberg cast such disagreements as part of the normal give and take of the Alliance rather than evidence of a breakdown.

“It would be strange if twenty-nine allies with different political parties, different history, different geography, always agreed on everything,” he said. “But the lesson we have learned from history is that despite these differences we have always been able to unite around our core policy to protect and defend each other.”

And while Stoltenberg could not guarantee that NATO leaders would leave the meetings having assuaged Turkey’s demands, he stressed that the bloc is committed to the security of the Baltic states regardless of the fate of the Baltic expansion.

Stoltenberg also touted the adaptability of the alliance in the face of new threats. In response to a question about China, he noted that NATO leaders will, for the first time, be discussing a collective response to Beijing’s rise as a world power.

“This is not about moving NATO into the South China Sea, but it’s about taking into account that China is coming closer to us—in the Arctic, in Africa, investing heavily in our infrastructure in Europe, in cyberspace,” he said.

And Stoltenberg welcomed rising levels of defense spending across the Alliance. While NATO countries rightfully dropped their defense budgets after the end of Cold War, he said, “we have to be able also to increase defense spending when tensions are going up.” He noted that nine NATO members now meet the alliance’s goal of 2 percent of gross domestic product for defense spending and that “the majority of allies have plans in place to meet two percent by 2024.”

Stoltenberg cautioned that NATO could do more to seek dialogue with Russia and find ways to resurrect arms control after the death of the INF Treaty. But he ended his talk on a positive note, saying that the bloc is ready and willing to make whatever changes necessary.

NATO is defined by its success—not its tensions

While international headlines have focused on high-profile disputes within the NATO alliance over a litany of issues including defense spending, trade, Syria, and Brexit, transatlantic leaders stressed on December 3 that these disagreements are dwarfed by the continued success of the seventy-year-old alliance.

Edward Ferguson, minister counsellor for defense at the Embassy of the United Kingdom in the United States, said that the Alliance is setting an ambitious agenda for the summit “to show that NATO as a septuagenarian is as fit and virile as ever and to highlight the progress we have made in adapting NATO’s deterrence and defense since the 2014 Wales Summit.”