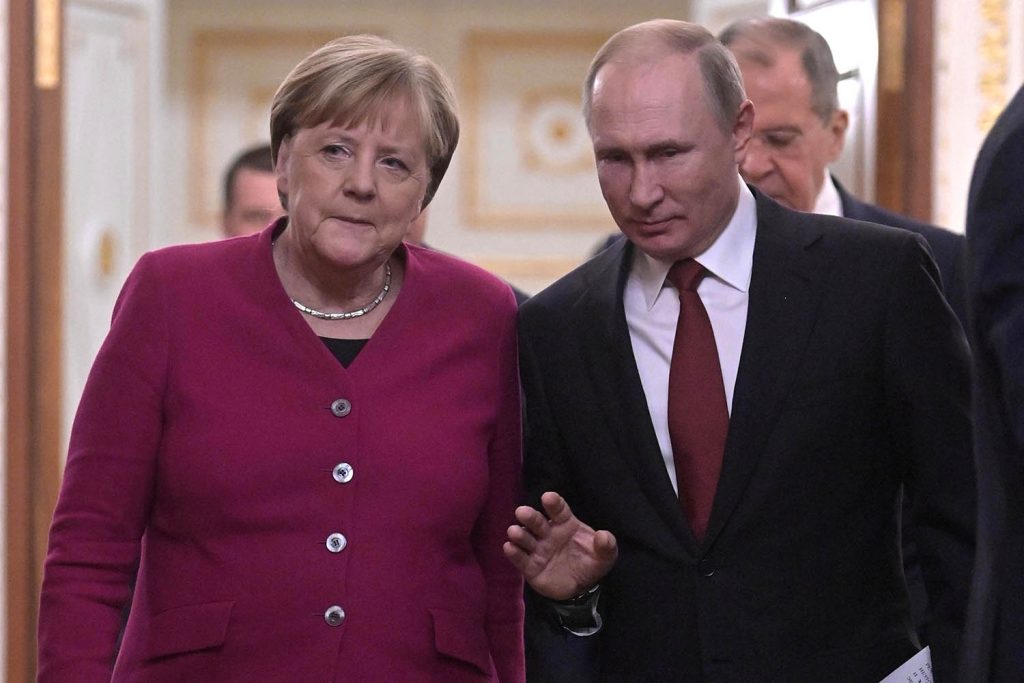 The arrival of Russian opposition leader Alexei Navalny at the Charité hospital in Berlin at the end of August has ignited a series of problems for German Chancellor Angela Merkel as she considers just where to draw the line with Russian President Vladimir Putin.

On September 2, Berlin announced it had “unequivocal evidence” that Navalny was poisoned by the same chemical agent Russian authorities have used in the past to assassinate political opponents. The next day, German politicians from both the opposition and Merkel’s own party demanded she drop support for Nord Stream II, Germany’s controversial gas-pipeline project with Russia. On September 9, Moscow warned Berlin that its refusal to hand over Navalny’s medical information indicated a “hostile provocation against Russia,” likening it to the 1933 Reichstag fire that the Nazis blamed on the Comintern.

How Merkel responds to these events will likely have cascading effects on international politics. For a leader often described as cautious and risk-averse, Merkel may not welcome that state of affairs. But it is largely due to her success as chancellor that Germany’s decisions, even on seemingly discrete events, can alter the global balance of power.

Intentionally or not, the Kremlin has forced Merkel to decide if she has a red line for Putin. The question is not a new one. Aside from leading EU sanctions after the 2014 Crimea crisis, Merkel has let little interfere with German economic interests in Russia. She has consistently met criticism of Nord Stream II—which would double the capacity of Russian gas pumped into Germany and cut Ukraine out of the European gas network—by insisting the pipeline is purely an “economically driven project.” After a 2015 Russian cyber-attack on the Bundestag and the 2019 assassination of a Chechen rebel by a Russian agent in central Berlin, Merkel called for “dialogue” with Putin.

This time is different. Navalny is not a provincial insurgent but an international figure, the face of democratic resistance in Russia and defiance against Kremlinite thuggery. Merkel is fighting hard to decouple the Navalny incident from Nord Stream II, both in policy terms and in the public imagination. But given the futility of targeted EU sanctions or expelling diplomats as means of punishing Moscow, face-saving alternatives that do not address the pipeline are hard to identify. If Merkel doubles down on Nord Stream II even as Navalny emerges from a coma and plots his return home, the narrow ruthlessness of the chancellor’s priorities may be more than her universalist rhetoric can withstand.

Nor can Merkel count on containing the fallout in Europe from a tepid German response. Just as former US President Barack Obama discovered his “red line” crisis in Syria could have consequences as far away as the South China Sea, Merkel may find that wiggling out of decisive action on Navalny and Nord Stream II will eliminate her ability to draw red lines with Beijing.

With China, too, Merkel has long deflected criticism for her prioritization of German business interests over human rights and the rule of law. According to the Chinese state news agency Xinhua, recent negotiations for an EU-China investment treaty went off track when Merkel and her European counterparts raised questions about the Uyghurs and Hong Kong with Chinese President Xi Jinping. Xi, who stopped short on market-access concessions for the EU, reportedly informed his interlocutors that “China does not accept ‘lectures’ on human rights.”

If Merkel had planned to drive a hard bargain with Beijing—by conditioning an agreement on access for “independent observers” in Xinjiang, for example—she could be derailed by her predicament with Russia. The construction of Nord Stream II is nearing completion, while EU-China talks, which began in 2012, do not reconvene until December. If the pipeline is completed before then with no real penalties for the attempt on Navalny’s life, Beijing may conclude that Merkel is not serious about concerns beyond those of German industry.

According to a recent Politico report, Beijing and Berlin are used to staging “an elaborate choreography” in which “Germany pretend[s] to be upset over China’s human rights abuses” while “Beijing feign[s] offense at Berlin’s ‘intrusion into its domestic affairs.’” But even if that has been true in the past, the international spotlight on the Navalny incident could complicate Merkel’s ability to play-act this time around. The impression of working with Beijing at the expense of Hong Kong, Xinjiang, and Tibet would only sharpen the risk of appearing to work with Moscow at the expense of Ukraine, Poland, and the Baltics.

If Merkel shepherds through both the Chinese treaty and the Russian pipeline with nothing to show for either Navalny or Xinjiang, a third domino could potentially fall. Putin’s most important priority in Europe right now is keeping Belarus from slipping away. His meeting with Belarusian President Alyaksandr Lukashenka recently ended with Russian guarantees of support, heightening expectations that Lukashenka may soon succumb to pressure for concessions on his country’s sovereignty. Putin is currently planning for all contingencies, and his experience losing Ukraine did not teach him to consider only measures short of force.

Merkel has expressed her “hope that [Russian] troops won’t be deployed” in Belarus, and claimed Germany’s “heart beats with the demonstrators in Minsk.” But if Germany sets no precedent with regard to Navalny or Nord Stream II, Putin may conclude—at the very least—that the most powerful country in Europe will not encumber his freedom to act.

Merkel prefers to keep Germany’s commercial interests in a separate silo than its diplomatic and security concerns. But for a country of Germany’s power and influence, this strategy is no longer tenable. If Merkel hopes her strategic rivals will obey certain red lines, the responsibility lies largely with her. And the time to draw those lines is now.

A few weeks after the groundbreaking budget agreement adopted by the European Council on July 21, it would be tempting to say that COVID-19 changed everything in the European Union, in line with the oft-repeated principle: “It takes a crisis for Europe to act.” Like all clichés, there is some truth in this statement.