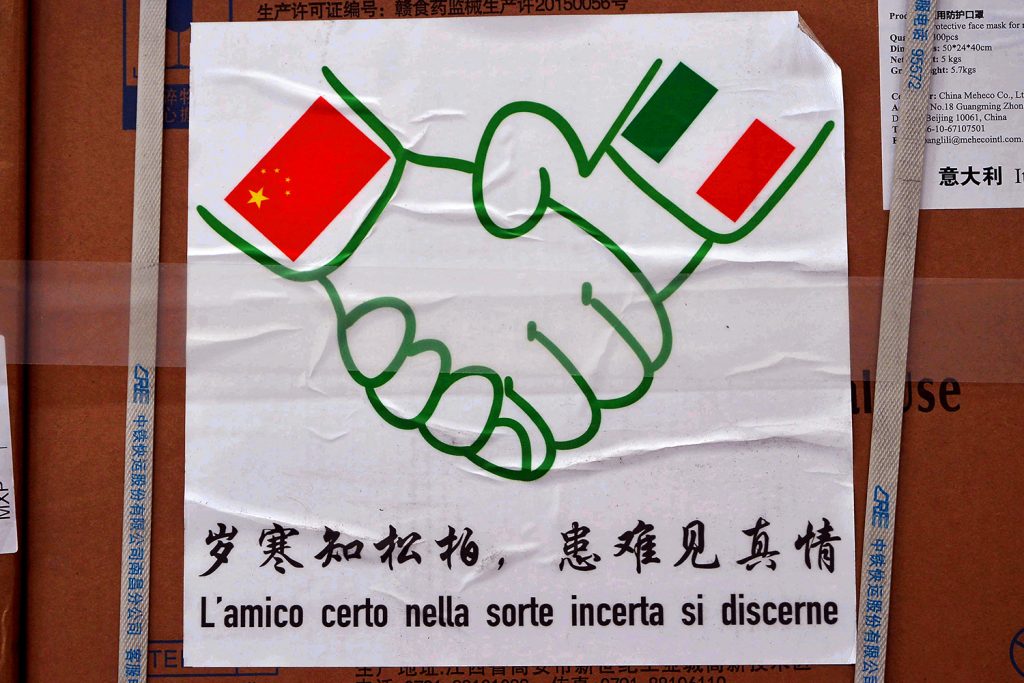 Italy has a geopolitical problem. An April 7 opinion poll showed for the first time that Italians look more to China than to the United States as a potential international partner. The SWG research institute captured an unprecedented situation in the long-term transatlantic friendship as when asked, “Who should Italy look more to develop their international alliances outside of Europe?” 36 percent of Italians indicated China, while only 30 percent chose their historic American ally.

This is the first and most visible result of the propaganda campaign launched by China after the outbreak of the coronavirus pandemic, which culminated in a highly-publicized aid delivery by Beijing to Italy.

As already noted by Formiche, China has implemented an active information campaign on social networks, using bots and old techniques of Russian disinformation. Social networks alone, however, are not enough to explain the rise of China’s popularity. Traditional media in Italy, such as TV channels and newspapers have played a decisive role.

Several editorial agreements between Chinese and Italian media outlets were signed in March 2019, following the Italian government’s signing of the Memorandum of Understanding to join the Belt and Road Initiative in the presence of Chinese President Xi Jinping. All the most important and influential Italian media outlets (press agencies, newspapers, and TV) entered into partnerships with the Chinese state agency Xinhua, the China Economic Daily, and the China Media Group (CMG).

Beijing’s popularity has been built with patience and diligence in recent months. When the pandemic moved from Wuhan to Europe—hitting Italy in particular—Xi tried to turn the risk of the crisis into a new opportunity to relaunch the Silk Road. Thus, they used not only social media but also mainstream media, as TV is still the principal means of information for Italians. The arrival of aid from China to Italy became a hit TV show.

Formiche carried out a data analysis in collaboration with a Rome-based media intelligence company, Datastampa to compare the media coverage of Chinese, Russian, and US aid arrival, measured by the time dedicated to each by the state-owned Rai, the main Italian television network. The numbers are staggering.

The news of the cargo flight from China has had more than triple the visibility compared to the announcement by US President Donald J. Trump to send $100 million of assistance to Rome. Even the controversial arrival of military aid from Russia had more time on Rai channels than the White House initiative, but much less than that reserved for China.

The seven RAI broadcasts analyzed dedicated a total of sixty-three segments to report aid from China, Russia, and the United States, respectively on March 12-13, March 23-24, and March 30-31. The analysis shows that Chinese aid received 1904 seconds of visibility, Russian aid 741 seconds, and US aid only 589 seconds.

Xi’s propaganda operation was successful, but will it last? Will China be able to change Italy’s traditional geopolitical position? “We have such a strong interconnection of economic and values ​​systems among Western countries that thinking that a historic pillar like the United States can be replaced from morning to night means being completely wrong,” said Senator Pier Ferdinando Casini, a former president of Italy’s Lower House. “There is no doubt that China and Russia have a consolidated relationship with Italy which they have strengthened in recent months. However, friendship or collaboration is one thing, another is a strategic and geopolitical alliance,” said the senator.

“These are issues relating to communication, therefore of an emotional nature, typical of public opinion,” reflects Carlotta Ventura, director of the Center for American Studies, a think-tank based in Rome. “In the wake of this closer relationship that has been demonstrated by China since the beginning of the Italian crisis, we immediately forgot where the virus came from.”

According to Arturo Varvelli, director of the Italian Office of the European Council on Foreign Relations, tensions between Italy and the EU have been used by Beijing. “Brussels made mistakes, European leaders made careless statements. Nonetheless, Europe is doing much more than China has done…as a matter of fact.”

China’s public relations campaign is turning heads in Washington too. Dario Cristiani, IAI fellow of the German Marshall Fund of the United States says that “the Chinese offensive charm in Italy is attracting attention from think tanks, Congress, and the administration. The Chinese leadership in 2003 theorized a public opinion warfare. In Washington, there is now awareness of the new posture imposed by Xi. Maybe not everyone in Italy knows it.”

And we now know why. Television and newspapers show a different reality: the Chinese model.

“Disaster Diplomacy” and the US response to COVID-19