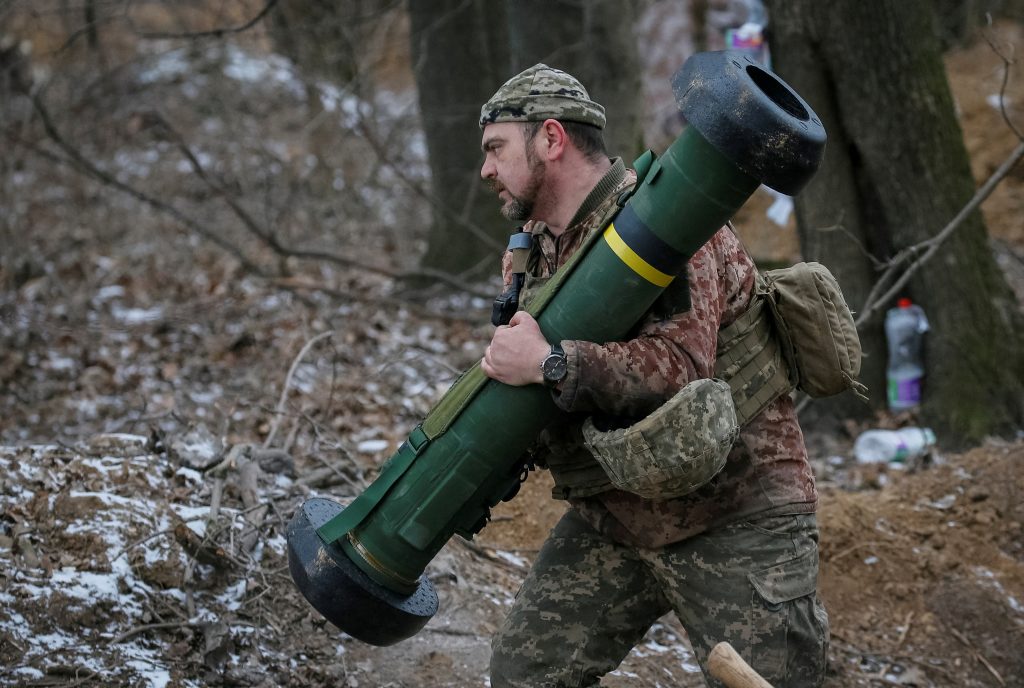 In light of the ongoing Russia crisis, the Scowcroft Center’s Forward Defense (FD) practice will share regular assessments of the latest force developments surrounding Ukraine, leveraging the expert perspectives of our senior military fellows. The opinions, conclusions, and recommendations expressed or implied here are solely those of the authors and do not represent the views of the Department of Defense or any other US government agency.

On April 19, Russia initiated its campaign in the Donbas region with a large-scale artillery barrage in the Donetsk and Luhansk oblasts. Russian forces are now attacking Ukrainian forces in the western Donbas from all sides in an attempt to encircle and force the surrender of tens of thousands of Ukrainian troops. This campaign is likely to become a bloody stalemate, with Russia leveraging its numerical advantage in forces and long-range fires—including air and missile strikes—and artillery and rocket attacks to make small gains across the region.

On April 21, Russian President Vladimir Putin declared victory in Mariupol and directed Defense Minister Sergei Shoigu to halt the assault on the Azovstal steel mill and continue the blockade of the mill “so that a fly can’t get through.” We believe this decision was likely driven by high Russian losses and the desire to pivot Russian forces to the Donbas front.

That same day, Major General Rustam Minnekayev, deputy commander of Russia’s Central Military District, captured global headlines when he indicated that his country intended to take “full control” of much of eastern and southern Ukraine, including building a land bridge to Moldova’s breakaway region of Transnistria. Central to this objective would be taking the coastal city of Odesa—leading us to believe that Russia is likely to increase naval fires and missile attacks on Odesa, but will not be able to conduct an amphibious operation or an overland attack to capture it. It is highly unlikely that Russia will open up another major front while it focuses on the Donbas.

The race to resupply

As the Donbas campaign grinds to a bloody stalemate, both sides will be desperate to maintain their logistics lines and resupply their forces. The delivery of reinforcements, ammunition, fuel, and supplies will be critical—and the side that establishes resilient supply lines first will gain a major advantage.

The newest tranche of US military assistance. On April 21, US President Joe Biden announced an additional $800 million of security assistance to Ukraine. Highlights from the latest announcement include: seventy-two 155mm Howitzer towed artillery pieces, 144,000 artillery rounds, and 121 Phoenix Ghost tactical unmanned aerial systems (similar to the Switchblade “kamikaze” drone). This tranche focused on the type of offensive weapons (i.e., long-range artillery and lethal drones) that Ukrainian forces need to win in the Donbas.

Security assistance for Soviet-built systems. On April 25, the DoD announced another $165 million in security assistance to Ukraine, bringing total US security assistance to nearly $3.6 billion since the invasion began. Unlike previous transfers of military equipment, this aid is exclusively for the procurement of Soviet-built equipment and ammunition for systems the Ukrainians already operate—specifically rockets, artillery shells, and mortar rounds. This aid is critical because it will be easier to move to the front than entire Howitzer systems, no training or integration testing is needed, and these munitions can make an immediate impact on the battlefield.

Need for sustained military assistance. Throughout the conflict, US government officials and national-security experts have held off on transferring “heavy weapons” with long training timelines and integration processes, including US-built fighters, air defense systems, and multiple launch rocket systems (MLRS). Because Ukraine needs immediate help, the logic went, these systems would not impact the short-term objective of keeping Ukraine in the fight. While valid at the time, this reasoning does not hold as the war drags on. The United States and its allies and partners must shift their overarching objective from simply keeping Ukraine in the fight to building a strong military machine that can decisively defeat Russian forces.

Defense Production Act (DPA). The US transfer of weapons to Ukraine, especially Javelins and Stingers, has increased dramatically since the war began. The DPA could provide tools to help the United States sustain the flow of weapons to Ukraine while also replenishing its own stockpiles. Many presidents have used the DPA to direct private companies to prioritize government orders; provide loans; and allocate materials, services, and facilities for national defense purposes. Deputy Defense Secretary Kathleen Hicks met this month with many of the largest defense contractors to discuss equipping Ukraine and backfilling stockpiles. Part of the power of the DPA is the understanding among contractors that the US government can direct action if needed.

We predict that the battle for the Donbas will be won by the same side that wins the race to resupply. Both Russia and Ukraine recognize the importance of logistics, as seen by recent attacks on enemy resupply lines. Despite huge losses in the north, Russia maintains numerical and firepower superiority. Ukrainian forces must continue to outthink their adversary—but they must also be supplied with the offensive weapons to counterattack and dislodge Russian forces from entrenched lines. As the war drags on, the United States and its Western partners must realize the value in sending Ukraine advanced Western weaponry. This strategy will not only keep Ukraine in the fight but give Ukraine a real chance of victory.

Check out these military moves and more on our military assessment map here.

Today’s briefing is brought to you by senior US Air Force fellow Lt Col Tyson Wetzel, senior US Army fellow COL Benjamin G. Johnson, and senior US Marine Corps fellow Col J.B. Barranco. The Scowcroft Center Military Fellows Program, housed by the Forward Defense practice, hosts military fellows from participating branches of the US military and the armed forces of US allies and partners each year as part of a twelve-month fellowship program. 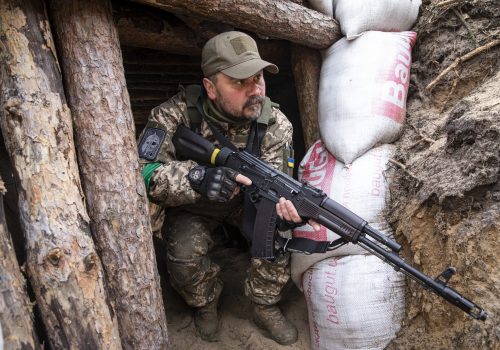 Russia Crisis Military Assessment: How Ukraine can take the fight to Russia

As Ukraine prepares for a larger fight against Russian forces in the east, its military is in urgent need of weapons that will support an offensive, according to our military fellows. 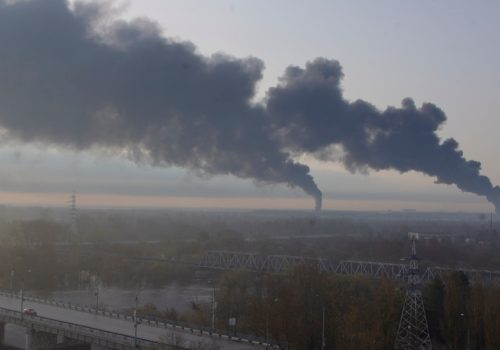 On April 25, large fires were reported in Bryansk, Russia, just 100 kilometers from the Ukrainian border. DFRLab geolocated the fires to confirm an armed forces fuel depot was damaged. 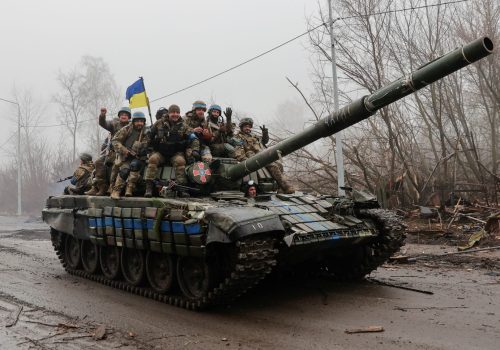 The United States is reviving the WWII Lend-Lease program which helped defeat Hitler in order to dramatically increase arms deliveries to Ukraine and set the stage for Vladimir Putin's eventual military defeat.

Image: A Ukrainian service member holds a Javelin missile system at a position on the front line in the north Kyiv region, Ukraine on March 13, 2022. Photo by Gleb Garanich/Reuters