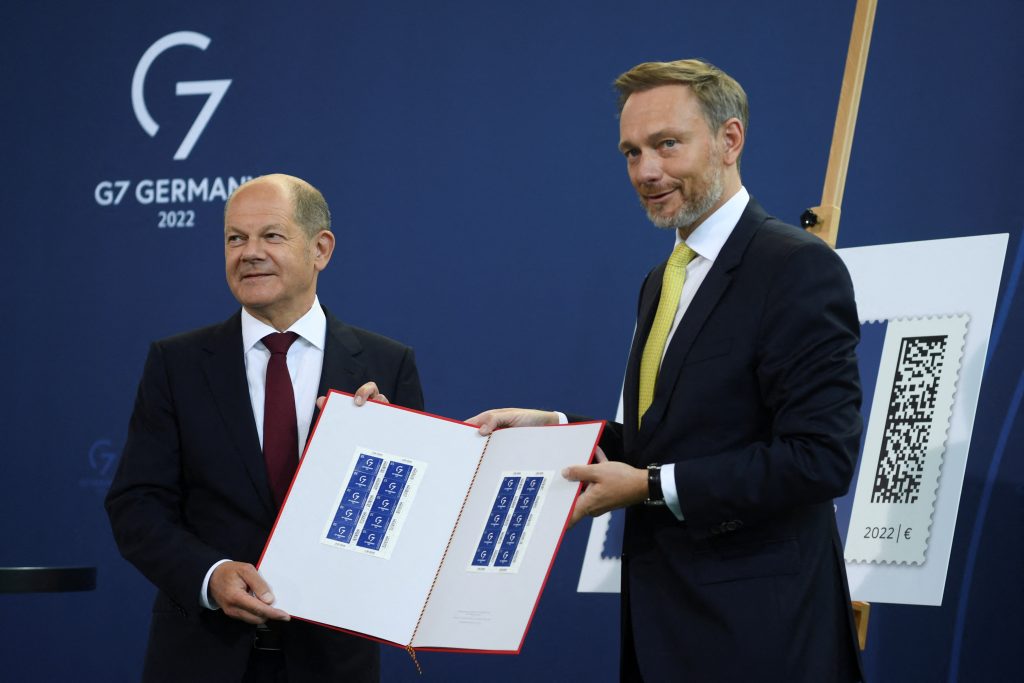 When the Group of Seven (G7) leaders get together in the Bavarian Alps this coming week for their forty-eighth annual summit, it won’t be a typical meeting. For starters, different faces will populate the “family photo”: There’s a new German chancellor and Japanese prime minister—not to mention a re-elected French president.

But more importantly, the G7 has finally flexed its muscles after watching its relevance being called into question for a decade. Now that it has brought down a heavy financial hammer against Russian President Vladimir Putin following his invasion of Ukraine, the question facing the leaders of this group—which represents around half the global economy—will be: What do they do next?

Our GeoEconomics team brings you seven data points they’ll be thinking about as they search for a path forward.

The leaders of the G7 economies meet precisely as their independent central bankers are beginning to take ownership of inflation. The bankers are raising interest rates with some dread: Most have spent the past eighteen months arguing that inflation is mainly being driven by supply-side shocks—the kind monetary policy is meant to ignore. Now, high energy prices and constraints on Chinese growth have led policymakers to increase the odds of a global recession. Record-high inflation in the eurozone, the United States, and the United Kingdom will feed expectations of further price increases, and central banks recognize they need to intervene to break the cycle.

Coordination is the purpose of the G7. While rates will be hiked at slightly different intervals, leaders can discuss the fiscal side. All are tempted to support households that are facing higher bills, but the countries are coming out of the pandemic with higher debt burdens. Fiscally conservative members, such as Germany and the United Kingdom, will also argue that profligate spending will cause inflation to last longer.

Will the rate hikes do enough? They are significant for economies that have become used to cheap credit over the past decade. And while the eurozone has seen negative interest rates for about that long, with inflation this high—over 8 percent in the United States and the eurozone— it’s unclear whether rates between 1.5 and 2 percent will alter expectations.

—Charles Lichfield is the deputy director of the Atlantic Council’s GeoEconomics Center.

G7 economic growth has slowed by more than 2 percent compared to projections from last year. With the group now collectively forecasted to grow around 3.25 percent in 2022, a range of factors—particularly Russia’s invasion of Ukraine—are responsible for the slowdown. But even before the war, the advanced-economy recovery was in a precarious place: Inflation throughout the G7 was already rising due to imbalances in supply and demand, and exacerbated by the fiscal support governments provided during the pandemic. New lockdowns in China also played a role by worsening inflation and causing additional bottlenecks in global supply chains. The war added an additional series of supply shocks as it restricted access to Russian oil, gas, and metals, as well as Ukrainian wheat and corn. This surge in fuel and food prices has been most acutely felt in European economies. Look for coordinated action from the G7 on unblocking ports and relieving some of the pressure on food supply.

—Niels Graham is an assistant director in the GeoEconomics Center.

G7 countries have imposed unprecedented coordinated sanctions and export controls against Russia with the goal of turning the country into a global economic pariah and increasing the cost of waging its war in Ukraine. While the original G7 agenda does not mention Russia or Ukraine by name, there’s no doubt that one of its goals is to safeguard global economic recovery and financial stability—both of which are currently undermined by Russia’s invasion of Ukraine. Addressing the challenges of supply-chain disruptions and global food shortages will require G7 partners to reintegrate Ukraine into the world economy and provide financial assistance to Kyiv.

Fortunately, the seven countries are on the same page when it comes to funding Ukraine, having pledged twenty billion dollars to prop up Ukraine’s budget. But as Ukraine’s finance minister said during an event at the Atlantic Council last month, not all that money has reached its bank account. Kyiv will have the chance to make the case in person: President Volodymyr Zelenskyy has accepted the German chancellor’s invitation to take part in this year’s G7 summit.

—Maia Nikoladze is a program assistant in the Economic Statecraft Initiative within the GeoEconomics Center.

Hindsight is 20/20—and for the G7, it might indeed be a good idea to look back. Forecasting is always a precarious business, which is why many international organizations temporarily suspended economic prognostication in the thick of the pandemic. But the US Federal Reserve and European Central Bank didn’t have that luxury; they had to do their best to estimate gross domestic product (GDP) growth, inflation, and interest rates over multiple years despite the fog of an unprecedented supply chain crisis and mutating virus.

It didn’t work out as they had hoped: The forecasts varied so widely over the past year that it called into question whether they were even worth doing in the first place. So should the G7 nations keep trying to forecast to markets what’s coming, or simply deal with what’s right in front of them? Expect some humility from the leaders this week as they work to address the immediate inflation crisis—while recognizing that neither they nor the brilliant economists in their governments can predict the next global pandemic, or how the war in Ukraine will end.

—Josh Lipsky is the director of the GeoEconomics Center

Germany’s emphasis during its G7 presidency on financial stability and inclusive growth means debt will be a key theme at this year’s summit. In response to the pandemic, countries worldwide pushed through massive fiscal-stimulus packages to provide economic relief. While debt-to-GDP ratios are elevated for all countries compared to pre-pandemic levels, they are slowly beginning to subside for G7 economies—but still have yet to peak for emerging markets and developing economies. Tighter US and European monetary policy, surging commodity prices, and a drastic decline in global-trade growth will hamper their ability to retain dollars and service their unprecedented levels of debt.

As the risk of debt default increases for those countries, G7 members should take steps to ensure that the G20 Common Framework for Debt Treatments is implemented effectively. This means China, as the world’s largest bilateral creditor, needs to step up and help renegotiate with countries to avoid default. Look for how the G7 coordinates this week ahead of next month’s G20 finance ministers meeting in Indonesia—and watch whether it takes up US Treasury Secretary Janet Yellen’s call at the Atlantic Council in April for a reform of the Bretton Woods system.

—Mrugank Bhusari is a program assistant in the GeoEconomics Center.

All of the G7 economies are in the process of developing a Central Bank Digital Currency (CBDC) to promote digital transformation and provide more efficient payment systems. Canada, France, Germany, Italy, and Japan are in the more advanced stage of development and have been testing both retail and wholesale CBDCs since April 2021. The first three, in particular, are helping create the digital euro. The United States and United Kingdom are the farthest behind on CBDC development, as both are currently in the process of establishing research partnerships. In the former, President Joe Biden’s executive order on digital assets initiated further research and interagency coordination for the digital dollar. The G7 has shared concerns regarding privacy and cybersecurity of the different CBDC models.

When it comes to cross-border testing, the focus of the G7 should be on interoperability across the various domestic CBDC models, legacy payments infrastructure, as well as regulated, private digital currencies. This is not just an abstract problem: When the G7 cut Russia off from SWIFT, it increased incentives for countries like China to find new ways to send money across borders. Meanwhile, the collapse of cryptocurrency markets is reminding regulators why they need to step in and help protect consumers.

The new Central Bank Digital Currency (CBDC) Tracker & interactive database takes you inside the rapid evolution of money all over the world.

—Ananya Kumar is the assistant director of digital currencies at the Atlantic Council.

At last year’s G7 summit, the first item on the agenda was to end the pandemic by vaccinating the world. Leaders adopted the World Health Organization’s goal of vaccinating 70 percent of every country’s population by mid-2022 and committed to sharing at least 870 million doses within a year. Unfortunately, only 17.8 percent of people in low-income countries have now received at least one dose. Resolving this crisis requires equitable distribution.

A successful global vaccination push by the G7 will contribute to global immunity, reduce the risk of new variants emerging, and enable the resurgence of the global economy. The pharmaceutical industry has produced more than thirteen billion doses, but low-income countries still face obstacles due to supply-chain bottlenecks and intellectual-property protections. These are challenges that the World Trade Organization’s recent decision to ease intellectual-property restrictions on vaccines fails to address. This year, G7 commitments toward both vaccine supply and global distribution strategies will be a deciding factor in resolving the COVID-19 pandemic and resulting economic blight.

—Sophia Busch is a project assistant in the GeoEconomics Center. 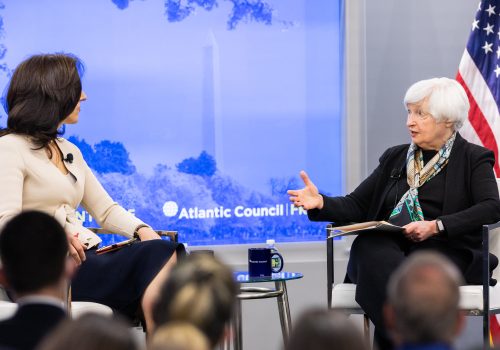 Janet Yellen’s message to the world: There can be no ‘sitting on the fence’ on Russia

The US secretary of the treasury joined the Atlantic Council ahead of next week's IMF and World Bank meetings to address Russia's invasion of Ukraine and the economic fallout for the developing world. 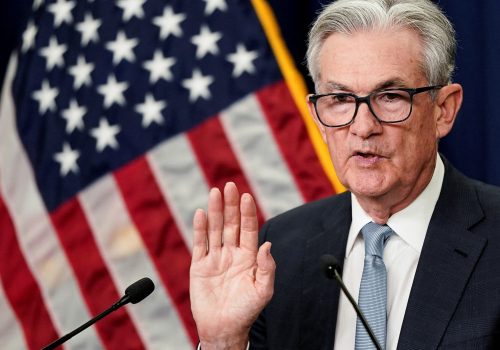 FAST THINKING: The Fed pulls the emergency brake. Will it work?

Our global economic experts take you behind the numbers to understand what’s next in this uncertain monetary moment. 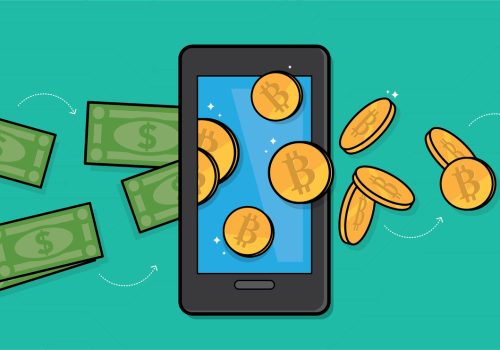 Biden’s Executive Order on Digital Assets has been Released. Now What?

Biden signed an Executive Order on CBDCs, Stablecoins and Cryptocurrencies. What does this mean for the future of digital assets and their regulation in the United States?