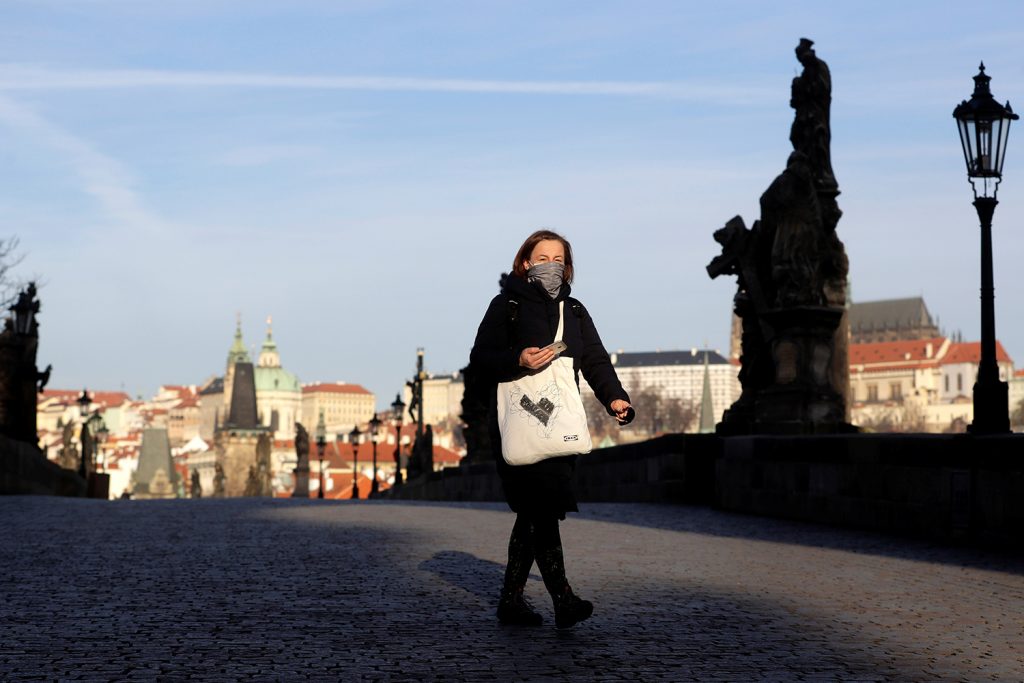 When Czechs look back one day on the coronavirus crisis of 2020, the image likely to spring to many minds is of colorful homemade face masks. Covering one’s mouth and nose in public became compulsory on March 19, less than three weeks after the first cases of COVID-19 were detected in the Czech Republic, and bare faces became a rare sight almost instantly.

While the World Health Organization and others have questioned the efficacy of wearing masks, the Prague government took the advice of its own experts and became the first in Europe to make them obligatory (though scarves, repurposed T-shirts, and other items may also be used).

Czech officials can claim some success. A raft of policies including compulsory face covering have led to a fall in the projected basic reproductive rate (the expected number of infections generated by a single case) of the coronavirus from 2.6 at the outset of the crisis to what one official called the “incredibly positive” figure of just 1.1.

Prime Minister Andrej Babiš tweeted at US President Donald J. Trump suggesting the United States follow suit on face masks, even calling on the US president to “please retweet” his message. The Czech interior minister, Jan Hamáček, donated around $400, the equivalent of the standard fine for not donning a mask in public, after a photograph of him bare faced at a meeting raised eyebrows. “The same rules apply to everybody,” he said.

Anchors and reporters alike appear in masks on Czech TV stations. Many ordinary citizens have also mobilized, dusting off their sewing machines and using materials of every pattern to supply their communities with handcrafted ones, adding a dash of color to the country’s otherwise largely empty streets. Indeed, fabric shops were added to the short list of essential stores and there have been queues—complete with appropriate social distancing—outside many.

While many Czechs are taking the situation rather stoically, others have been indignant that actual surgical masks are virtually impossible to find in pharmacies or other outlets. A stream of reports that medical personnel are often forced to treat COVID-19 patients without sufficient masks, or vital respirators, has particularly incensed the public. A growing crisis at the country’s nursing homes, where staff cite insufficient equipment and training, has—at least going by social media—shaken the resolve of some voters previously prepared to give Babiš and his cabinet the benefit of the doubt.

The Czech government acted unusually swiftly to try to nip the spread of COVID-19 in the bud. Alongside the compulsory face-covering provision, all schools and universities have been closed. A ban on leaving or entering the country was introduced less than two weeks after the first detected cases, while one senior official even said some border restrictions could be in place for up to two years.

A thirty-day state of emergency declared in mid-March looks set to be extended until the end of April (with further extensions possible) following a vote in the Czech Parliament on April 7. A prohibition on going out in public except to work or make purchases at a limited range of stores is for the most part being observed. Ministers have ruled out an “Italy” scenario and the total number of deaths as of early April 6 stands at seventy-two, which may be considered a “success” in comparison with a great many other states.

However, as elsewhere, the economy in the Czech Republic has been crippled. Another abiding image of the crisis will be eerie photos of Prague’s historical center, normally crammed with tourists whatever the season, almost completely bereft of people. Hotels, restaurants, and bars have seen their earnings go right off a cliff while many Czech arts organizations may struggle to ever recover. Industry has also been extremely hard hit. Carmaker Skoda Auto, responsible for around 9 percent of all Czech exports, has shut down production totally. Business leaders have been calling for a clear timetable as to when the country’s economy will be able to begin returning to full steam and Prime Minister Babiš has said life should return to “normal” by June.

Ian Willoughby is a journalist with Radio Prague International.

COVID-19 in the Western Balkans

COVID-19 overshadowed two major developments in the region: the EU decision to open membership talks with North Macedonia and Albania, as well as North Macedonia’s formal accession to NATO on March 27. In normal circumstances, this would have been huge news. Yet now the pandemic leaves little bandwidth for other matters, even in the Western Balkans.

Image: A woman walks across an empty medieval Charles Bridge in Prague, as the Czech government restricts movement of people to slow the spread of the new coronavirus disease (COVID-19), Czech Republic, March 16, 2020. REUTERS/David W Cerny