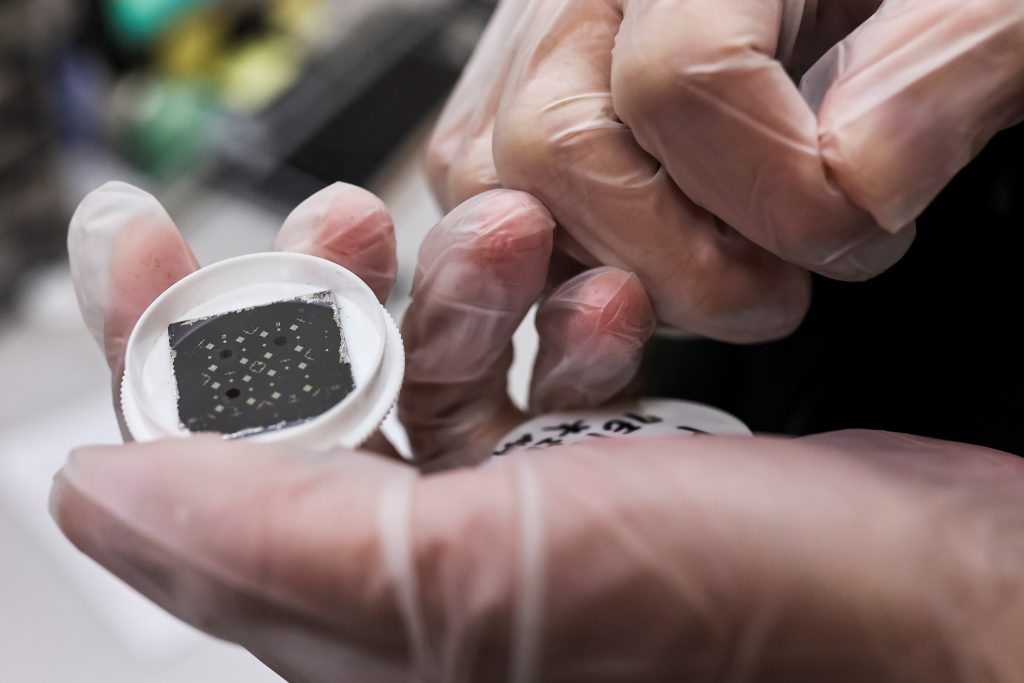 The White House’s decision on Friday to impose more restrictions on selling semiconductors and chip-making equipment to China—a move designed to slow Beijing’s ability to upgrade its economy and military—was telling. It shows once again how the United States is under increasing pressure to stay ahead of China’s efforts to expand its semiconductor industry and reduce reliance on Taiwan as the sole supplier of advanced electronics essential to US military and commercial needs. The Biden administration’s new export controls come on the heels of Congress approving billions of dollars to support cutting-edge chips manufacturing. However, money alone will not guarantee the success of the US-based semiconductor industry. US firms should also glean critical lessons from successful incumbents in allied and partner countries like South Korea and Taiwan.

China’s recent breakthrough in producing semiconductors using seven nanometer (nm) process technology—a level of production prowess that has eluded the top US chip maker, Intel Corporation—underlined the need for US government support to ensure domestic chip makers maintain the capacity to produce the most sophisticated semiconductors. The CHIPS and Science Act allocates fifty-two billion dollars in subsidies and tax relief to support chip manufacturing along with another two hundred billion dollars dedicated to research and other investments. The law is intended to provide subsidies and other assistance to Intel and other US semiconductor makers as they ramp up capital investment in manufacturing facilities. The funding also will benefit the Taiwan Semiconductor Manufacturing Company (TSMC) and South Korea’s Samsung Electronics Corporation as they build chip factories in Arizona and Texas, respectively.

These recent developments highlight the challenge of duplicating the exacting production standards of East Asian chip makers whose factories are central to globe-spanning semiconductor supply chains. The United States is seeking to catch up with the capabilities of established industry leaders in Taiwan and South Korea while also striving to stay ahead of China’s efforts to develop semiconductor self-sufficiency. Beijing is devoting hundreds of billions of dollars to this effort, one that most recently bore fruit when its leading chip maker, Semiconductor Manufacturing International Corporation (SMIC), managed to produce the seven nm chips—which only TSMC and Samsung had been capable of manufacturing—despite strict US controls on sales of key chip-making technology to Chinese companies.

There is an important strategic dimension to this competition that transcends the race for technological breakthroughs. Some analysts have raised concerns about whether China would invade Taiwan in order to seize its prized semiconductor industry, including TSMC’s most advanced factories. However, this is not an immediately realistic prospect for a number of reasons, including that such an attack would likely end up destroying Taiwan’s factories and scattering the industry’s greatest resource—its deeply experienced engineers and technicians—around the globe. Not to mention the disastrous impact that this outcome would have on the global economy, especially for an industry that is based on a tightly integrated supply chain that includes Japanese, American, Dutch, South Korean, Chinese, and Taiwanese suppliers.

Moreover, the invasion scenario gives short shrift to the mutual dependence that has built up between the Taiwanese and Chinese economies over the past four decades, largely because of the bonds created by trade in semiconductors. This interdependence has created what the Taiwanese populace often refers to as the “silicon shield.”

But the threat to Taiwan’s industry—and the vulnerability of semiconductor supply chains—has also given pause to US politicians and industry executives, contributing to an increased policy focus on ramping up American chip-making capabilities. The United States currently accounts for 12 percent of global semiconductor manufacturing, down from 37 percent in 1990. TSMC, meanwhile, produces over 90 percent of the most advanced chips and will soon begin commercial production on a three nm “node,” or production line. If successfully commercialized, chips produced from this node would be the world’s smallest.

The technical hurdles to duplicating the Taiwanese and South Korean success stories are daunting. State-of-the-art chip foundries cost more than ten billion dollars. Even once they are built, achieving mass production of flawless devices is no easy task. Witness the difficulties Intel has faced in recent years while trying to advance its production to the point where it can make seven nm semiconductors. Currently, Intel’s leading chips are produced under contract in its Asian competitors’ factories. Furthermore, the production process requires hundreds of sophisticated inputs and devices procured around the world, none more important than the $340 million machines produced only by the Dutch company ASML Holding that etch circuitry using extreme ultraviolet lithography.

But producing the most advanced chips involves much more than simply mastering the technology. The real challenge lies in attaining high yields of flawless chips in factories that produce millions of semiconductors. Imagine finding a flaw caused by a random light particle that is virtually too small to detect, on electronic circuits separated by only a few billionths of a meter. The more densely packed circuits are within a chip, the harder it is to attain the level of perfection necessary to provide chip makers with their profit margins.

TSMC has become renowned for achieving up to 95 percent yields at its factories—meaning nineteen out of twenty chips are perfect. After four decades of developing and perfecting groundbreaking chip technology, the Taiwanese company has more experienced engineers and technicians and a greater understanding of the demands facing an intensely automated industry than any other company. This reflects a corporate culture that molds a workforce of thousands of technicians willing to execute the demanding work required to ensure high yields.

Such success also requires an educational system like Taiwan’s that can provide the basic training in electrical engineering to continuously churn out new technicians who will staff the dozens of chip factories operated by TSMC and the country’s other chip makers. The recently approved US legislation recognizes the importance of a trained workforce in building a revitalized semiconductor industry and thus calls for increased funding of university programs centered around new chip-making hubs.

The United States can also learn much from leading companies like TSMC and Samsung at the factory level. For instance, US factories should incorporate high-volume manufacturing, material procurement, quality control, machine-learning feedback, troubleshooting, and cost containment into their semiconductor production lines. In essence, these companies stay at the top of their game by running research and development twenty-four hours a day.

There is some concern in Taiwan that TSMC’s investments in the United States will weaken the company at home. But the reality is that the growth of competition will continue to generate innovation, strengthening the semiconductor industry in Taiwan and benefiting all countries.

Ultimately, the best source of skills and experience for the US semiconductor industry will come from the industry’s Asian leaders, particularly as TSMC and Samsung seek to expand their manufacturing bases in the United States. Their presence on US soil—along with the suppliers and subcontractors that will move to their new base of operations—will foster an ecosystem that will fuel the efficient development of a semiconductor industry that can bolster US national security. US legislation such as the CHIPS and Science Act can support this process, and, as know-how spreads to Intel and other US companies, the integration of semiconductor supply chains across the Pacific will enhance the ability of democratic countries to maintain a competitive advantage against China and strengthen the backbone of the Indo-Pacific partnership.

Chun-Chao Lin, a lieutenant colonel in the Taiwan army, was the visiting military senior fellow at the Atlantic Council’s Scowcroft Center for Strategy and Security from 2021-2022.

This article does not necessarily represent the position of the Taiwanese Army or Ministry of Defense. 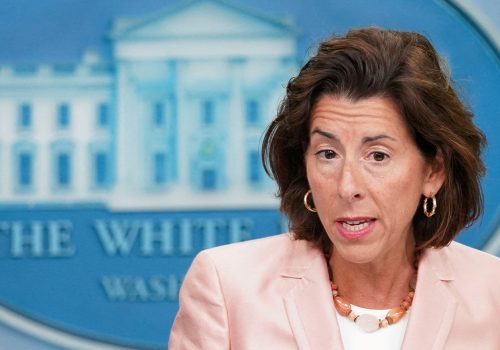 At an Atlantic Council Front Page event, US Secretary of Commerce Gina Raimondo offered a glimpse into the high-stakes race between the United States and China to dominate tech and other sectors. 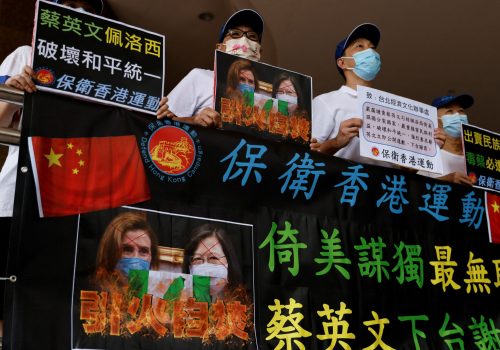 Both countries’ economies stand to lose if the situation in the Taiwan Strait continues to escalate. 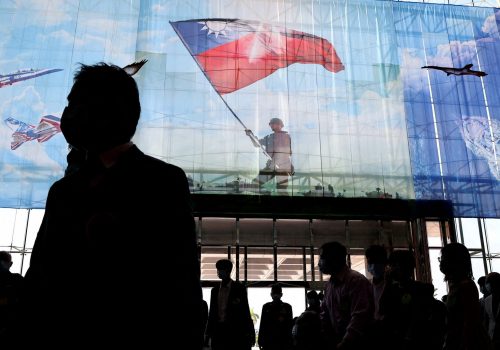 Image: An engineer holds a chip while posing for a photo, he is in the middle of testing reactions from different materials and shapes that can have on the chip at the Taiwan Semiconductor Research Institute (TSRI) in Hsinchu, Taiwan, February 11, 2022. Photo by Ann Wang/Reuters.