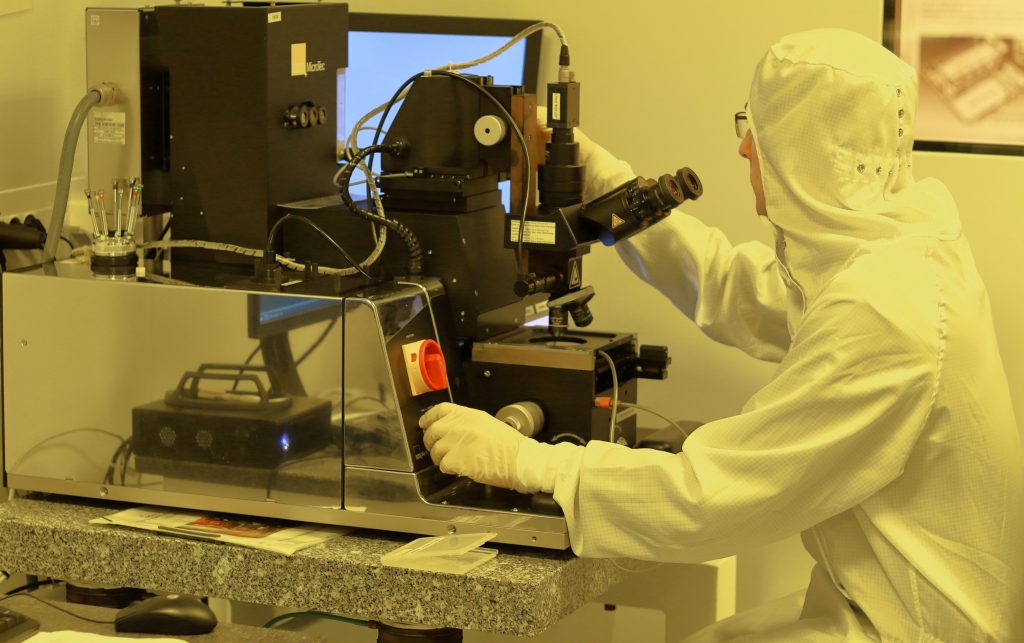 The Biden administration’s decision to treat US dependence on Asian-produced semiconductors as a national security issue is not a matter of simply building more factories. Rather, it presents the challenge of upgrading a lagging manufacturing base while simultaneously coordinating with international partners.

The US effort is likely to focus on research and development and incentives to companies to invest in new semiconductor factories. But there is a risk that rebuilding American chip manufacturing could end up reinventing a very expensive wheel—in the form of advanced technology that already exists, and is being constantly improved upon, in Taiwan and South Korea. Several questions about the Biden administration’s goals need to be answered: Will the plan focus on staying ahead of China—a key element of the supply chain review—or contributing more broadly to a US economic revival? If the former, should the US focus on duplicating the current generation of advanced semiconductors, or should it devote its resources to the technological breakthroughs that will provide a true strategic advantage in the decades ahead? Finally, will the policy response—especially the diplomatic dimension—go far enough in the face of strategic competition with China?

So, even as the Biden administration provides incentives to American semiconductor companies, it also needs to make Asian semiconductor manufacturers an important element of its blueprint. In particular, Taiwanese and South Korean companies should be encouraged to expand their plans to build factories in the US and bring their own suppliers along.

Thus, the importance of diplomacy. The Biden administration should deepen trade and investment ties with Taiwan and South Korea and find ways to bring them closer to the Quadrilateral Security Dialogue—the grouping of Australia, India, Japan and the US also known as the Quad—which the White House envisions playing an important role in responding to China’s strategic challenge in Asia. The point is that if America’s “competitive edge” is truly part of the Biden administration’s conception of national security and if reliance on foreign semiconductors is a potential national security threat, then the global semiconductor leaders should be at the diplomatic table. This pressure to pursue a multinational strategy will only intensify as China approaches its goal of producing cutting-edge technologies.

The focus on semiconductors, highlighted in a February 24 White House executive order calling for a review of supply chains in several industries, is based on two factors whose urgency has been heightened by a global semiconductor shortage. First, the economic vitality of the US and its ability to compete with China increasingly hinge on access to the microelectronics that power virtually every high-tech product and process. Second, the US semiconductor industry has failed to keep pace with advances in mass chip production that have enabled two companies—Taiwan Semiconductor Manufacturing Corp. (TSMC) and South Korea’s Samsung Electronics—to establish themselves as the sole producers of many of the world’s most advanced chips.

It is no surprise then that a report issued in February by the National Security Commission on Artificial Intelligence (NSCAI) highlighted the vulnerability of the supply chain: “We do not want to overstate the precariousness of our position, but given that the vast majority of cutting-edge chips are produced at a single [TSMC] plant separated by 110 miles of water from our principal strategic competitor, we must reevaluate the meaning of supply chain resilience and security.”

The core problem facing the US semiconductor industry has been a shift away from mass production of a wide range of chips. While the US leads sales, dominating profitable market segments like chip design and semiconductor manufacturing equipment, today it accounts for only about12 percent of chip manufacturing capacity compared with 37 percent in 1990. Intel Corp., whose microprocessors power most personal computers and servers, remains the world’s largest semiconductor maker, but it has not kept up with chip-making processes pioneered by TSMC and Samsung.

Those processes are broadly defined by the ability to reduce the space between electronic circuits to a few nanometers (billionths of a meter). TSMC and Samsung are mass producing 5-nm chips and expect to be up to commercial scale on 3-nm devices in 2022. Intel, which has struggled to produce 7-nm chips, now is reported to be contracting with TSMC to produce microprocessors. TSMC’s business model is to function as a “foundry” producer that only manufacturers chips to its customers’ designs, while Samsung produces its own semiconductors and offers foundry services. Intel has announced plans to build a pair of $10 billion factories in Phoenix, including it first foundry operation, but those plants still must master technologies that so far have eluded the company’s engineers. Meanwhile, Intel’s latest microprocessors are expected to be made by TSMC in Taiwan.

The Asian companies maintain their market position with vast amounts of capital spending–TSMC expects to invest $25-$28 billion this year alone, and Samsung is planning to spend $116 billion in the ten years to 2030. A big portion of those investments will be in the US. TSMC now is building a $12 billion factory in Phoenix to produce 5-nm chips in 2024—when 3-nm production is established as TSMC’s core revenue source and the company may begin moving to 2-nm production in Taiwan. Meanwhile Samsung currently produces 28% of its chips in Texas and plans to open a $17 billion facility in Austin in 2023.

By contrast, China has earmarked about $125 billion to develop its semiconductor industry, which currently is several generations behind its Asian and American competitors. US restrictions on sales to China of advanced chips and the most sophisticated semiconductor manufacturing equipment, imposed in 2020 by the Trump administration, have placed severe constraints on the Chinese industry. But many observers expect China to continue making progress, especially as it devotes its considerable R&D resources to next-generation technologies, as outlined in Beijing’s 14th Five Year Plan. Moreover, semiconductor supply chains, as they are now configured, are closely tied to industries within China, which play an important global role in chip assembly, testing, and packaging.

Although President Biden’s executive order has called for policy recommendations within 100 days, the US response already has been mapped out. The National Defense Authorization Act for Fiscal Year 2021, passed into law by Congress in January, calls for the creation of federal bodies to oversee advanced semiconductor development and authorizes investment in semiconductor manufacturing and support for research and development. But funds have not been allocated, and proposals to provide tax incentives for chip facilities, which the US semiconductor industry insists is essential, await congressional action.

One unanswered issue is where all the funding will go. The NSCAI report calls for investment in “next generation” technology and materials. But the US industry also talks about competing with Asian producers, when focusing on replicating existing supply chains may not be the best route to a secure semiconductor sector. The more effective—and cost effective—approach would be to build on the foundation of existing supply chains while developing future technologies.

President Biden’s executive order calls for recommendations on how the US can “successfully engage allies and partners to strengthen supply chains jointly or in coordination.” Taiwan and the US both certainly would benefit from such engagement, especially after economic relations were neglected during the Trump administration.

A task force on US-Taiwan relations assembled by the Center for Strategic and International Studies recommended last year that “the integration of [TSMC] and other Taiwanese high-tech firms with the United States would enhance secure supply chains in the transition to [advanced technologies] that will define prosperity in the twenty-first century.”

Taiwanese newspapers report that TSMC is considering more factories in Phoenix, and several Taiwanese suppliers have plans to set up shop in the area. There is a Taiwanese supply chain that could be transplanted to the US. What is required is systematic incentives from the US and state governments, which TSMC was reported to have received for its Arizona factory. Given continued, strong growth in global demand for chips, such expansion into the US need not undermine the centrality of Taiwan’s established semiconductor industry.

So, it is crucial that the Biden administration reinvigorate formal economic exchanges with Taiwan that have been on hold since 2016. Brian Deese, head of the White House Economic Council, has reached out to Taiwan’s minister of economic affairs to discuss semiconductors. But a concerted effort should be made to encourage investment and with the longer-term goal of negotiating a bilateral trade agreement.

A similar process to strengthen ties with South Korea is underway. The Biden administration has reached agreement with Seoul on cost sharing to support American forces based in the country, an issue that former President Trump had turned into a public dispute. The next step should be to strengthen economic ties, which also were strained during the Trump administration.

And there is a need to smooth tensions among US allies in the region, especially between Seoul and Tokyo. Their lingering dispute over the World War II comfort women” had an impact on the semiconductor supply chain in 2019 when Japan imposed hurdles on the exports to South Korea of key materials produced by Japanese companies.

It is notable that one of the first diplomatic initiatives undertaken by the Biden administration was to dispatch Secretary of State Anthony Blinken and Secretary of Defense Lloyd Austin to meet the Japanese and South Korean leaders—an interaction that once was routine for the US. Soon after, the Korean defense minister indicated that his government may strengthen military ties with Japan.

The Biden administration has started to harness national and multinational levers of power to address the strategic competition with China. However, as the administration focuses on supply chains as a core challenge, it should combine an industry-centered strategy with its broader engagement to reinvigorate alliances. Bilateral and regional exchanges—including in the context of the Quad talks—need to be part of the brick-and-mortar diplomatic effort that will help reinforce the semiconductor supply chain.

Jeremy Mark is a senior fellow with the Atlantic Council’s Geoeconomics Center. He previously worked for the IMF and the Asian Wall Street Journal. Follow him on Twitter @JedMark888