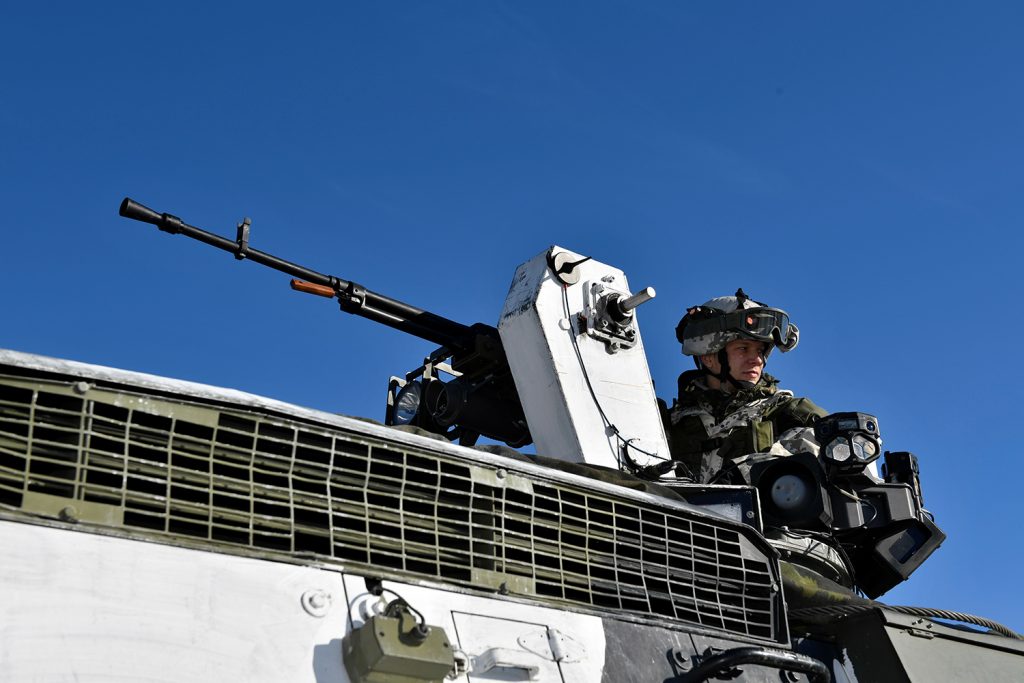 Each January, the Swedish defense community gathers 350 people in Sälen in the Swedish mountains to discuss Swedish security policy for three days. This year it took place January 12-14.

This is a peculiarly Swedish event. It is not organized by the government or any political party but by a non-governmental organization, Folk och Försvar (People and Defense), which consists of ninety-nine non-governmental organizations. In the otherwise cosmopolitan Sweden, all talks are given in Swedish. King Carl XVI Gustaf and Crown Princess Victoria preside, underlining the importance of the proceedings.

After Russia’s aggression against Ukraine in February 2014, the Swedish thinking about its defense has changed remarkably. Like most of Europe, Sweden had steadily disarmed for a quarter of a century after the end of the Cold War, and its military expenditure had sunk to 1 percent of gross domestic product (GDP).

Russia’s actions against Ukraine woke Sweden up. Swedes got upset, while the Finns were worried. Together with Poland and the three Baltic states, Sweden has been among the European Union countries most committed to sanctions against Russia over Ukraine.

In a very Swedish fashion, all the eight parliamentary political parties took part in the joint Defense Commission, concluding that Sweden is facing a rising threat from Russia. Therefore, Sweden needs to increase its military spending sharply. This new Swedish consensus was displayed in full force.

To an outsider, it might have been strange in Sälen to see one prominent Swede after the other stand up and speak about the Russian military threat. The three main Swedish ministers did as well, all social democrats. Defense Minister Peter Hultqvist has made himself a name as a hardliner, but the new Foreign Minister Ann Linde surprised many by being as firm as Hultqvist on Russia, underlining that Crimea is Ukrainian. Her predecessor Margot Wallström would have spoken more softly. Minister of Interior Mikael Damberg held equally firm, calling for a great strengthening of the police. Nobody spoke at length about Islamist terrorism or China as serious threats, even if they were mentioned.

More peculiar was that two leftwing (that is, communist) MPs took the same hard stance on the Russian threat, as did two MPs from the rightwing populist Sweden Democrats. Both parties tend to vote with the pro-Russian parties in the European Parliament, but at home they dare not. The consensus was deafening despite the presence of 350 people from all kinds of nongovernmental organizations.

The Defense Commission consensus was that Sweden’s defense expenditure should increase by 50 percent until 2025, from 1 percent of GDP to 1.5 percent of GDP. All the speakers agreed. Representatives of the four non-socialist parties, currently out of government, called for a doubling of Swedish defense expenditures to 2 percent of GDP until 2030, while the ruling social democrats claimed that it was too early to make such a decision, though not really opposing it.

Swedish politics typically swings in this fashion, as when momentum for a policy change appears, a new consensus is quickly established. It is difficult, however, to get all the ducks in line at once. The two big outstanding issues are military alliances and military strategy.

After the 2014 Russian aggression against Ukraine, a large group of top Swedish foreign policy specialists advocated for Sweden to join NATO. They were supported by the four non-socialist parties, but the proposal did not gain support from a majority of social democrats. In the last few years, NATO accession has been a big topic of contention, while this year the non-socialists just repeated their desire to join NATO, while the social democrats softly avoided the topic. Yet, all favored bilateral military cooperation with the United States and Finland.

A less obvious topic of dispute was what military defense Sweden needs for the future. General Micael Bydén, the Supreme Commander of the Swedish Armed Forces, spoke diplomatically about an expansion of all military forces. In the discussion, however, a difference between the politicians and the military emerged. The military prefers to stick to the old Swedish idea of focusing primarily on air and coastal defenses, while the politicians have all visited Ukraine and are more concerned about effective ground defense of Stockholm and Gotland, the island in the middle of the Baltic Sea.

A visitor to Sweden six years ago would not recognize the mood. While Swedish defense remains minimal, the change in defense policy is remarkable because of the focus on the Russian threat, the commitment to increased military expenditures, and the broad political consensus.

Anders Åslund is a senior fellow at the Atlantic Council. His latest book was “Russia’s Crony Capitalism: The Path from Market Economy to Kleptocracy”

Strong support for the EU in Sweden ahead of European elections

Overall, the Swedish debate on the EU has been criticized by experts and journalists for failing to address central questions, such as how the EU should prevent another economic crisis and how the deepening defense cooperation could progress further.

Image: A Finnish machine gunner is pictured during the Northern Wind exercise conducted by Swedish Army in cooperation with allied armies, in the north-eastern part of Sweden, March 22, 2019. TT News Agency/Naina Helen Jaama via REUTERS