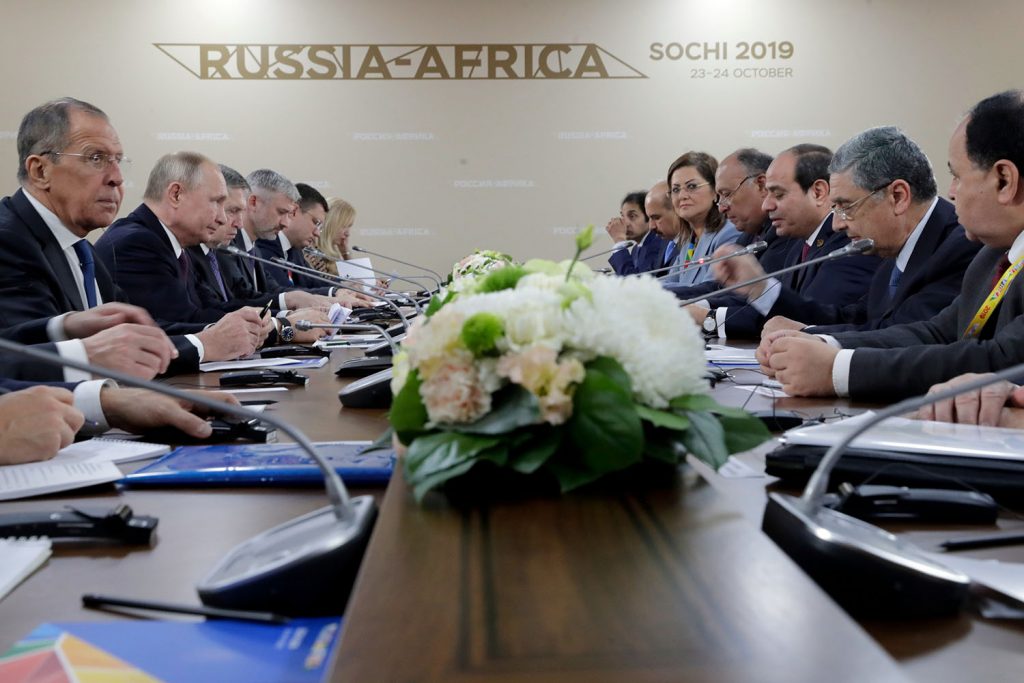 On October 23 and 24, African leaders will gather in Sochi, Russia, as Russian President Vladimir Putin hosts the first Russia-Africa Summit, which the Kremlin has described as a strategic forum that exemplifies Putin’s effort to ensure that Africa will not  be a third-party observer in the next round of great power competition.

The summit will be cohosted by Egyptian President Abdel Fatah al-Sisi; a strategic choice by Putin that should concern advocates for democratic values around the world. While Russia’s relationship with Egypt dates to the early orthodox church, and the years following the Protestant Reformation, more recent relationships between Cairo and Moscow have troubled the West.

Gamel Abdel Nasser’s reliance on Soviet support and Hosni Mubarak’s training with the Soviet military created natural alignments between Egyptian and Soviet—and later Russian—leaders. Putin’s gesture to Sisi is his attempt to reinstate this alignment and show support for Sisi’s style of leadership.

Global democracies have not done enough to empower democrats in Egypt in the wake of the Arab Spring. Two revolutions, a new constitution, and thousands of Egyptians taking to the streets in Tahrir Square should have been signals for democratic states to support and nurture a fledgling democracy in Egypt. Western democracies, however, have failed to stand by Egypt over the course of the past five years.

The opportunity for Egypt to be a non-permanent member of the United Nations Security Council in 2016 and 2017 was a prime opportunity to endorse Egypt as a democratic player on the international stage. Yet, the United States and other democracies failed to use this opportunity to promote democratic ideals and practices in Egypt.

While US President Donald J. Trump praised Sisi’s strongman leadership, and attempted to build a positive relationship in the run up to the 2016 election, the inclusion of Egypt in his 2017 travel ban chilled relations. To add insult to injury, the Trump administration cut aid to Egypt due to human rights abuses in August of 2017. Less than a year later—in July 2018—the administration reinstated military aid, even though the human rights abuses had not been addressed. This was a tacit endorsement of Sisi’s authoritarian rule and record of repression.

There are instances—like the human rights abuses in Egypt—where it is acceptable to withhold aid or sanction foreign governments. However, implementing this standard inconsistently will lead these governments to look for aid and allies elsewhere—as Egypt’s blossoming relationship with Russia demonstrates. The inability to predict the impacts of sweeping policies have left the Trump administration in a poor position to be an ally for democratic values, creating a power vacuum perfectly tailored for Russia to step in and provide support and influence.

Even the recent positive signs in the Trump-Sisi relationship are troubling. Just last month, Trump referred to Sisi as his “favorite dictator.” While the improved relations are laudable, praising the dictatorial nature of Sisi’s rule undermines the role of the United States as a champion of democracy.

For thousands of years Egyptian leaders have been compared to the great pharaohs. Sisi’s recent efforts to eliminate presidential term limits is a regressive step toward the last century’s presidencies. President Sisi knows he cannot accomplish this goal with the assistance of western-style democracies that are built on a system of free elections and peaceful transitions of power. However, Putin, who has successfully maintained power for two decades—under multiple titles—could help Sisi stave off his political enemies. President Sisi’s project to build a new capital city as a monument to himself might not be sufficient to solidify his legacy, but his efforts to extend his reign seem to be an additional attempt at enshrining himself among the modern pharaohs.

The lack of leadership from established democracies is harming the global cause of freedom and democracy. The former bastions of democratic ideals have not stopped to take notice or action. Regardless of the domestic political turmoil in notable large democracies, democratic governments have a responsibility to support the spread of democratic principles in countries—like Egypt—that are signaling to the world that they are prepared to take the leap. The United States must use the positive relationship that has developed between the two presidents to encourage Egypt to become more democratic, acknowledge and work to correct their record of human rights violations, and strive to meet an internationally recognized standard for election monitoring.

Last week, the European Union opened the doors for maligned, authoritarian powers to gain influence in the Balkans. The United States and other democracies around the globe cannot sit idly by and watch the same door be opened to North Africa in Sochi this week.

Egypt’s latest protests are an alarm bell for Sisi

Other waves of protests could create serious consequences for the economic sector and for political stability. This is the main challenge for the president, but it is also an important testing ground for the resilience of this peculiar stratocratic system.

What the CAR story provides is yet further evidence that America’s autocratic rivals, both Russia and China, are acting with greater operational creativity and strategic purpose than their counterparts – in this case France and the United States.