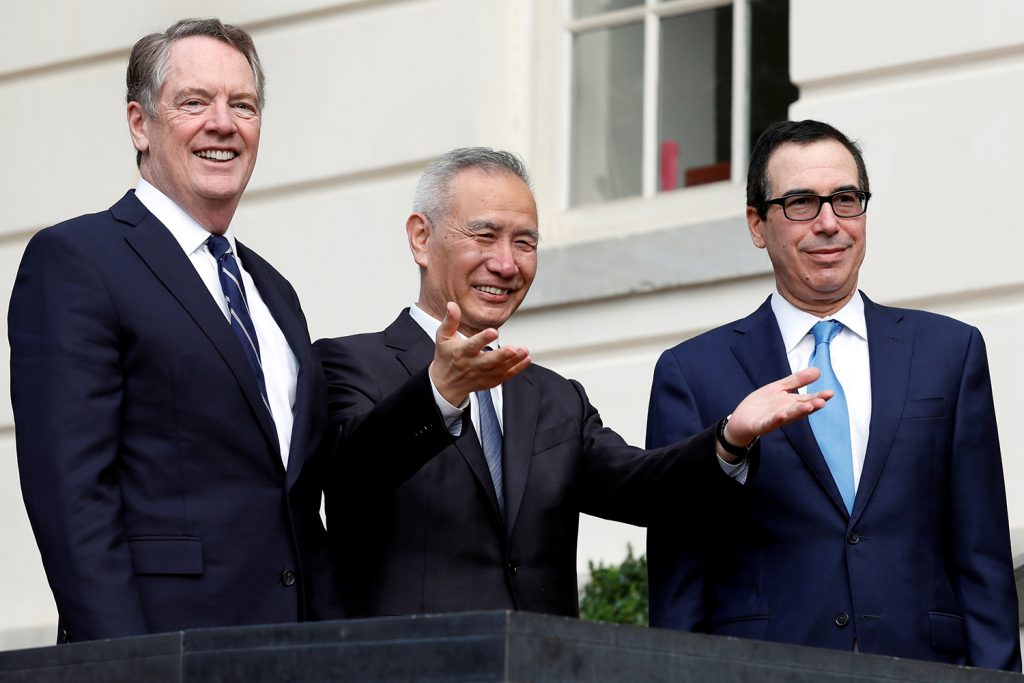 Chinese and US negotiators agreed to hit the pause button on their trade war on October 11, with US Treasury Secretary Steven Mnuchin confirming that impending US tariff increases on China would not take effect as both sides make progress towards an agreement.

A scheduled US tariff increase on $250 billion worth of Chinese goods was supposed to occur on October 15, but Mnuchin explained that these increases would now not go forward. The announcement was made after a meeting between US President Donald J. Trump and Chinese Vice Premier Liu He at the White House after days of negotiating between Chinese and US officials in Washington.

Trump said that both sides were nearing agreement on a “very substantial phase one deal,” which still needed to be confirmed in writing, but was on track for formal approval when Trump meets with Chinese President Xi Jinping in Chile in November. US officials said that China was going to agree to $40 to $50 billion worth of US agricultural purchases and that both sides had made progress on issues such as currency manipulation and forced technology transfer.

Initial prospects for an agreement this week were darkened on October 7, when the United States placed eight Chinese technology companies on a blacklist, preventing them from doing business with US companies without being granted a specific license. But in the early morning of October 11, the China Securities Regulatory Commission announced scheduled timetables for allowing full foreign ownership of finance businesses, including futures traders by January 1, 2020. Trump himself tweeted on October 11 that “good things are happening at China trade talk meeting. Warmer feelings than in recent past, more like the old days.”

Trump has repeatedly criticized China for its use of unfair economic practices, including forced technology transfer, state subsidies, and intellectual property theft. The Trump administration has used escalating tariffs in an attempt to reach a more comprehensive trade deal with Beijing to curb this behavior, but the October 11 meeting signals a desire by both sides to lessen tensions as they continue to negotiate.

“Despite the suspense” which circulated in Washington over rumors that a substantial deal was agreed to, Atlantic Council nonresident senior fellow Hung Tran described the October 11 announcement as “more like a minimal mini-deal” which “trades a US delay in the October 15 tariff hike for China’s promise to purchase $40-50 billion of agricultural products.” While this means that there will undoubtedly be “more suspense to come” as both sides continue to negotiate, Tran called the October 11 announcement “a step in the right direction to calm tension between the two countries.”

Atlantic Council Nonresident Fellow Marie Kasperek agreed that the delay of tariff increases is “a step in the right direction in the sense that it avoided further escalation.” Importantly, however, US Trade Representative Robert Lighthizer clarified that Trump has not made a decision on pending 10 percent tariffs on $300 billion worth of previously un-tariffed Chinese goods scheduled to take effect in December. Beijing responded to this tariff threat with their own tariff increases of 5 to 10 percent on $75 billion worth of US goods on August 23.

As Kasperek explained, “until anything is written down and signed by both sides, [the October 11 announcement] is simply maintaining a status quo of billions of dollars of tariffs between the two countries, with impact on global supply chains.” We have also been here before, Kasperek noted, as “we have seen in May when the Chinese side walked back their commitments after reviewing the written agreement.” The removal of tariff increases on October 15, however, does “come just in time ahead of the US holiday season, avoiding a potentially steep increase in the price of consumer products typically purchased for Black Friday, Cyber Monday, or during the Christmas Season,” according to Kasperek.

The pause with the trade war with China could also have an impact on other US trade relationships. “For the second month in a row, the United States has reached at least a partial trade agreement with an Asian counterpart,” Atlantic Council nonresident senior fellow Barbara C. Matthews explained, in reference to the limited trade deal reached between the United States and Japan in September. This “Pacific pivot” on trade, she argued, “increases the pressure on the US administration to deliver similar downshifts in trade tensions with transatlantic partners next month when the auto sector tariff decisions are expected.” US-EU trade tensions have worsened after the World Trade Organization ruled that the United States could impose tariffs on $7.5 billion worth of EU goods in retaliation for unfair European subsidies to aerospace company Airbus. The Trump administration is also facing a self-imposed deadline in November to decide whether to impose tariffs on European cars and car parts. Matthews noted that “it will be difficult to justify increased auto sector tariffs on European cars in November given the tariff climbdowns to Japan and China.”

While the current trade war pause is good news for many concerned about a damaging escalation in tensions between two of the world’s most important economies, there remains a long road ahead before either Beijing or Washington is ready to fully commit to trade peace.

Beijing strikes back with more US tariffs

The decision to increase tariffs “sends a message that China will match US tariff moves,” according to Hung Tran.

While the United States thinks it can create better economic outcomes by forcing concessions out of Europe, this new action will only continue the lose-lose spiral of threats gripping the transatlantic trade relationship.