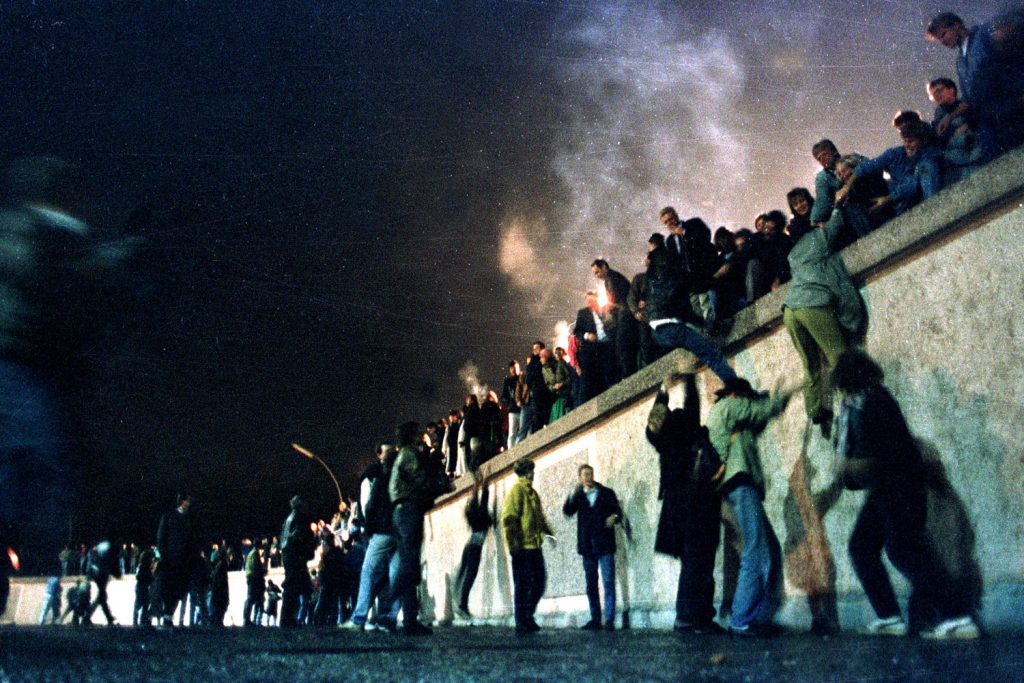 All in all, you were all just bricks in the wall, Pink Floyd famously sang. Throughout history, proud leaders have been busy at making people build barriers, fences, and borders. From the Great Wall of China to the proposed barriers on the US-Mexico border, walls throughout history have been as much about protecting and separating societies and individuals as potent symbols of political ambition and military might.

In June 1963 when US President John F. Kennedy famously declared himself to be ein berliner, the freshly built Berlin Wall loomed already large and menacing. The Soviet leader Nikita Khrushchev referred to West Berlin, this lonely outpost of freedom and self-government, as a “bone in his throat” to be disposed of. The Third World War seemed poised to break out.

Throughout decades of communism the Berlin Wall was just one of the many egregious, vivid examples of how freedom was restricted in the Soviet bloc. Thousands of miles of guarded borders made Central Europe feel imprisoned. On the outskirts of Bratislava in Devin, 400 people lost their lives—daring the barbed wire and dogs—trying to swim across the Morava river to get to the Austrian shore. (A little plaque was dedicated to the victims in 2008 by Queen Elizabeth II of the UK).

When walls are torn down, their rubble always marks a new beginning. The autumn of nations came so fast and unexpected. The USSR was dying, while the West exuded strength. Mikhail Gorbachev, unlike Leonid Brezhnev in Czechoslovakia before him, chose not to invade the Eastern bloc countries who were breaking free. People’s democracies died in peace. German reunification, for half a century unthinkable, became reality. Who could have predicted thirty years ago that the memories and vestiges of the Berlin Wall would be more about art installations, tour guides, and exhibitions rather than a sinister ideology which kept the half of the Old Continent in its tight grip for fifty years? Today the separate city of West Berlin is a distant memory. Quaint small differences like the superiority of kebab sold at food stands in the former west or the markedly different cobble stones in the pavement in the east are all that remains.

Central Europeans chose to join NATO and the European Union and firmly positioned themselves in the West. What started in November 1989 was symbolically wrapped up in December 2007 when the Schengen zone was enlarged into the post-communist EU member countries, allowing free movement of people across the previously militarized borders. There are now no border checks from Lisbon to Tallin—a powerful symbol of European unity. Where once there was barbed wire, there are motorways, cycling paths, and hiking trails, with only the occasional roaming wild animal to worry about.

Not all of Europe is whole and free. Eastern Europe is still walled off from the rest of the Continent by fences and customs checks. Ukraine, Moldova, Georgia, and others are still waiting for their reunification with Europe. Borders on the eastern flanks of the EU still resemble the Cold War, splitting territories which were once one cultural, social, or political organism. From Przemyśl in Poland to Lviv in Ukraine is just sixty miles, but travel can last over four hours, given the long lines at the border.

If there is one thing to learn from history it is that no accomplishment is complete or forever. There is always some wall, in literal or figurative sense, being built or rebuilt somewhere. Think of the so-called Gypsy walls built by local authorities in Czechia, Romania, or Slovakia to segregate the Roma minority from the rest of the population. Even more seriously, some governments have tried to entrench themselves in power by building political barriers between themselves and their citizenry, compromising freedom of speech or the independence of the judiciary.

Central Europe is still markedly poorer and less resilient in terms of economic shocks than its western neighbors. There is a risk of the middle-income trap for the region’s economies. Emigration has sapped the region’s growth potential. The agglomeration effect, where well-paid skilled workers tend to cluster in urban areas, has led to the marginalization of rural and small-town communities, breeding frustration and anger—across the whole region from the former East Germany to Poland or Lithuania. The imitation growth model, where Central European countries transformed their economies to match Western precepts, has reached its limits. The West (the United States especially) is less of a role model, with democracy and capitalism in obvious need of an overhaul.

There are still significant mental barriers between East and West in Europe. Western liberal values are contested in more conservative parts of societies. Anti-establishment backlash coupled with vulnerability to populism seems to be stronger in the former Soviet bloc. There are always those who undertake cynical wall-building, manipulate crowds, and exploit anxieties, fears, or stereotypes such as labelling Muslims as terrorists or accusing immigrants of stealing jobs, in order to solidify their grip on power. These are hardly problems unique to Central Europe, but are more of a challenge than in the traditional West.

In July 1990, Roger Waters from Pink Floyd staged a concert to commemorate the fall of the Berlin Wall which happened eight months earlier. It was a moment of celebration for the 350,000 people gathered there and millions in front of their television sets. It took part in a former “no man’s land” between Potsdamer Platz and Brandenburg Gate. The stage design featured a gigantic wall, which was then knocked down at the end of the show. The message today is as clear as it was thirty years later: barriers will never cease to be erected because of fear, oppression, and dangerous ideologies. It’s the role of every responsible individual and community to never stop tearing down these walls which divide people. As Pink Floyd put it in their closing track of probably the most geopolitically significant rock album in history:

All alone, or in twos
The ones who really love you
Walk up and down, outside the wall
Some hand in hand

And some gathered together in bands
The bleeding hearts and the artists make their stand
And when they’ve given you their all
Some stagger and fall, after all it’s not easy
Banging your heart against some mad bugger’s wall.

Image: People climb the Berlin Wall at the Brandenburg Gate after the opening of the East German border November 9, 1989. REUTERS/Herbert Knosowski