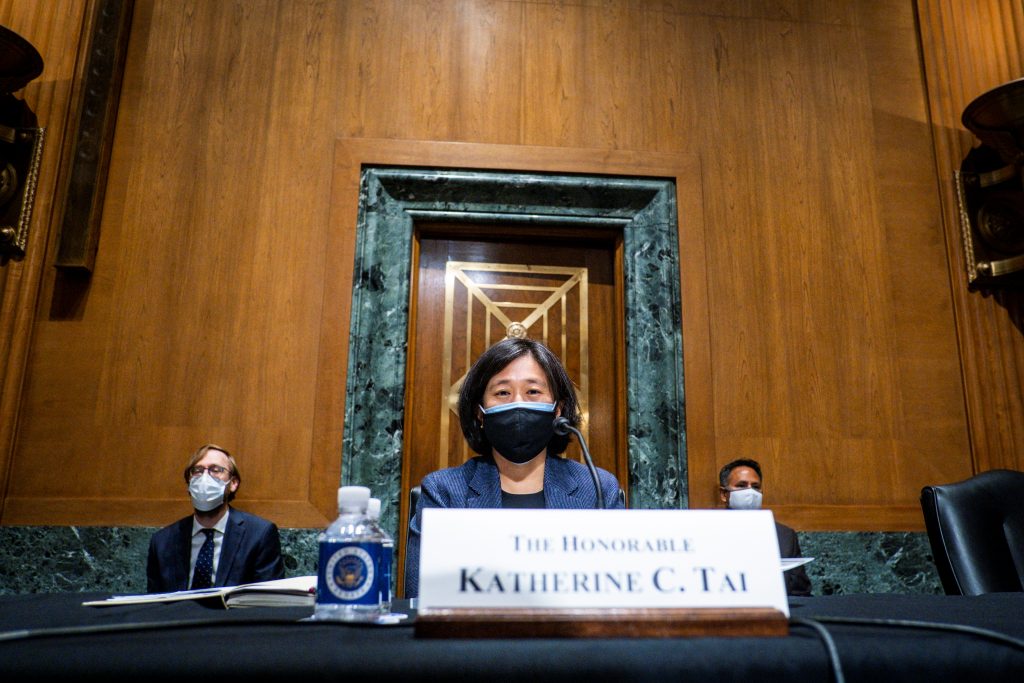 USTR Katherine Tai is set to visit India on a two-day visit from November 22 for talks with Commerce Minister Piyush Goyal, particularly to reconvene the Trade Policy Forum dialogues after a four year gap. The US-India trade talks are the Biden administration’s first serious stab at remedying trade tensions between both sides, and if achieved, would represent a significant step to expanding the bilateral relationship. Below, South Asia Center experts share their analysis on the upcoming talks.

A series of firsts for the US-India trade relationship

USTR Ambassador Katherine Tai will be in India before the end of November.  This would be a first from many perspectives: Ambassador Tai’s first visit to India as USTR top official; Meeting with her counterpart Piyush Goyal for the first time; and both countries will be convening under the Trade Policy Forum for the first time since 2017. Not only have the officials on both sides changed since 2017 (Suresh Prabhu and Robert Lighthizer oversaw the TPF in 2017), the trade goal posts have also moved in the past 4 years. At the time, both sides were keen on discussing a mini trade deal followed by a potential big deal, however both India and the US have a different set of priorities now.

The Biden administration is keen to address outstanding issues on trade secrets law, digital trade taxation, market access to health industry, market access to agricultural products etc., followed by possible discussions on options for GSP renewal for India, even though the renewal looks like a long road ahead given the House Ways and Means Committee has been dragging its feet on the renewal process since its lapse on December 31st, 2020.

On the other hand, India is prioritizing early harvest trade deals with the UK, UEA, Australia, Japan, Russia, Oman and South Africa to boost export oriented domestic manufacturing, with an ambitious export target of $500 billion by 2022 to all the above markets. The optics of discussing agriculture market access with the United States whilst there is a farmer’s uproar in India, would also deter this agenda at the TPF this time.

However, discussing cooperation on the health industry with an eye on COVID-19 vaccination and therapeutics promised under the Quad can probably be a solid outcome of the US-India trade conversations. Jointly working on health care is something that both the countries should and can work on without much delay or disagreement. The industry on both sides would benefit from this cooperation and would support the USG and GOI in bringing this to reality.

It’s critical for the Biden White House to keep restoring vectors of US-India diplomacy that the Trump administration eliminated or neglected—the last administration frequently put superficial embrace with Prime Minister Modi over substantive dialogue, and this was reflected in the outcomes of bilateral meetings. The recent announcement that US Trade Representative Katherine Tai will be visiting India later this month fits into the Biden White House pushes for renewed engagement.

On the technology side, data localization, supply chain policy, and cybersecurity and technology policy specifically towards China are likely to dominate the agenda. India’s Personal Data Protection Bill has essentially stalled in parliament, but it has been the subject of intense US pushback since its public release in 2019—with the Trump administration and many large Silicon Valley companies lobbying aggressively against the data localization provisions in the bill, which would require companies with data on Indian citizens to store either a copy in the country or the only copy in the country, depending on the case. There is little indication the Biden administration will not continue this push against data localization. Supply chain policy is also an essential issue for the two countries, particularly as the US evaluates vulnerabilities and chokepoints in the global tech supply chain and figures out ways to make those supply chains more robust, secure, and resilient. And especially following the Indian government’s sidelining of Chinese telecom Huawei and expulsion of many Chinese software applications, US and India technology policy vis-à-vis China will be another key issue for US-India discussions (and one with heavy impacts on trade).

The White House should also pressure the Modi government on its domestic internet and technology repression. In line with Modi’s general promotion of a dangerous ethno-nationalism and push to undermine democratic institutions, the Indian government has shut down the internet more times in 2018, 2019, and again in 2020 than any other country on earth. It has weaponized the internet to extend and conceal human rights abuses in Kashmir, expanded online censorship orders during the Covid-19 pandemic to target journalists, and proposed or discussed a number of concerning policies that threaten to undermine encryption and online speech for Indian citizens. The Biden administration must discard the view that ignoring domestic Indian digital rights abuses is the cost of getting Modi’s personal endorsement of technology positioning against China—and instead realize that claims of techno-democracy and digital human rights lose credibility if a key US partner does not promote and defend those values at home.

A need for cordial and constructive talks

The United States and India are set to resume the Trade Policy Forum (TPF) after a four-year hiatus. The Biden Administration’s decision to relaunch the TPF signals a welcome departure from its predecessor’s confrontational approach to trade. It comes as the White House tries to convey to Asian leaders its plans for a robust economic and trade engagement that is competitive with China’s regional approach.

While the talks should be cordial and constructive, US-India trade discussions are typically complicated by different histories, national economic circumstances, and ideology—and this session won’t be any different. The face-to-face meeting in New Delhi will allow the leaders to get to know each other, understand each other’s priorities, and finalize a common agenda for two-way negotiations.

The Biden and Modi Administrations are each focused on attracting manufacturing and winning the support of workers. India has recently attempted to reinvigorate trade talks with a number of countries as part of a renewed effort to spur export-led growth and employment. But USTR is reluctant to conclude a trade “mini-deal” that was being finalized last year but ultimately ran out of time.

Expectations for TPF “deliverables” should be rather modest as conversations are still in the early stages. Likely the most that can be expected is limited tariff reductions on both sides and perhaps slightly greater US market access on agriculture. Reduced trade barriers won’t be a feature of this TPF, as GSP reinstatement—a significant inducement for India—can’t be offered until Congress reauthorizes the program.

USTR is keen to talk about India’s digital, labor, and environmental policies. But each of these issues likely presents difficulties for the Modi government. India’s so-called equalization levy on digital services could be subject to US tariffs that enter into effect on November 29 if an agreement cannot be reached by the two countries in the next couple weeks. Substantive discussions on intellectual property are a comparative bright spot where the sides could conceivably be ready to announce progress.

What to expect? Not much

The Trade Policy Forum is long overdue to meet (last in October 2017 when I was the Assistant USTR). This format is very familiar, given that it’s been around since 2004 or so, but the Trump administration chose not to continue convening the TPF while it was negotiating a bilateral trade deal. That deal fell apart unfortunately, and now it’s back to the future with a broader agenda under the TPF. Don’t expect much. The likely outcomes in terms of resolving issues will be slim pickings, particularly because the Biden administration won’t have much to offer on reinstating benefits to India under the Generalized System of Preferences (GSP). The authorizing legislation for GSP expired at the end of 2020, and the Congress has yet to renew it. But this will be an important meeting, nonetheless, in taking the TPF forward again, settling on a new structure for broad-based work in the future, including on difficult digital trade issues, and ideally articulating a vision for the future of the bilateral trade relationship, even if the United States is not ready to explore a free trade agreement anytime soon.

A new style of engagement

The US and India have for decades used trade as a tool for diplomacy. Though, not liberally with each other. This needs to change given both countries desire to counter China’s growing global influence, and trade is a powerful tool.

The QUAD (comprising of US, India, Australia and Japan) have come together to shape the geopolitical influences in the region.

The global supply chain needs to implement a ‘China plus one’ policy—there is no better partner for the QUAD members than India. Also, the Covid-19 pandemic has established India as a reliable source of pharmaceuticals in the world. As the largest markets within the QUAD, the US and India must lead the way. With a stable democratic regime, a hugely skilled work force and a rapidly growing domestic market, US industries will find a reliable partner and market in India.

The bilateral agreement also needs to be a major departure from India’s old style of engagement. It needs to grant meaningful market access and move forward boldly, while including mechanisms to ease pressures in case of a surge of imports and an effective and timely mechanism for dispute resolution. There should be no hold back—Indian business and the Indian economy are ready to engage with a large economy like the US. The huge infrastructure spend in the US will also benefit from having an open market with India instead of China. India potentially can be a viable source for inputs and is the second largest producer of steel in the world.

More importantly, the QUAD alliance must be backed by trade and opening of the markets—this will also contribute towards the desired objectives of the alliance.

Suhail Nathani is a Managing Partner at Economic Laws Practice