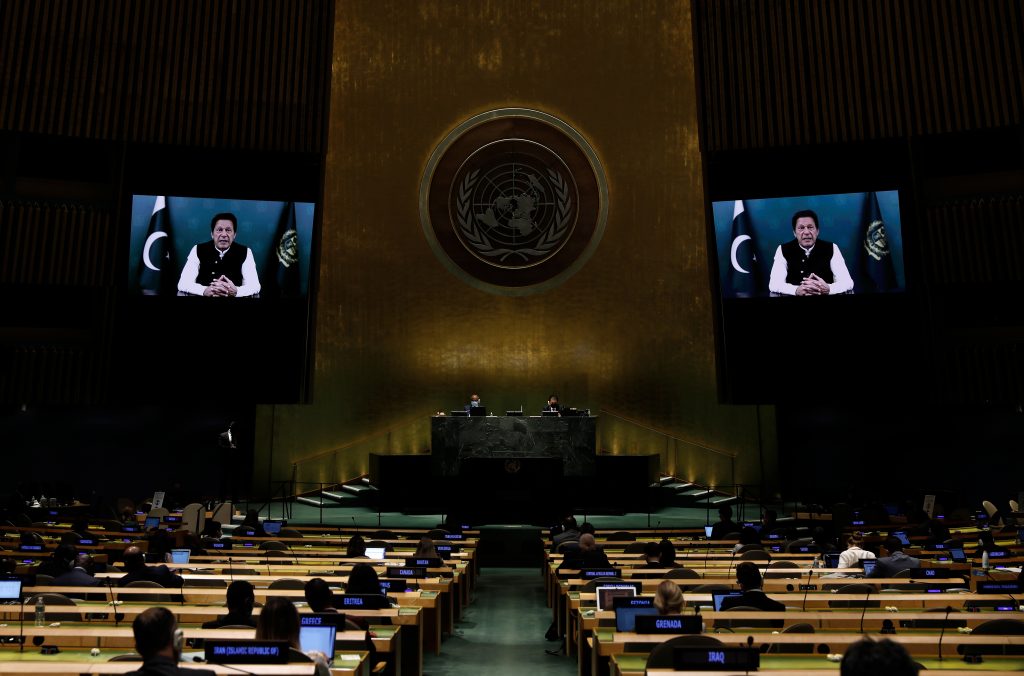 Pakistan’s foreign policy is a subject that has long enchanted scholars and practitioners alike, not least because of the country’s pivotal strategic location. Islamabad’s nuclear weapons, its complicated relations with New Delhi, and its growing strategic engagements with Beijing mean that it will continue to garner global attention. Consequently, Pakistan has maintained its relevance because of issues like strategic stability, the Afghan imbroglio, counterterrorism, and the brewing Sino-US rivalry given that they do affect or are linked to that country. However, Islamabad wants the world to look at, and talk about it, differently.

This desire has engendered a new policy articulation from Pakistani policymakers. They continue to consistently and vociferously highlight the country’s highly touted, ongoing shift from geopolitics to geoeconomics. What’s more, Pakistani officials have tried to ensconce the country’s foreign policy discourse in its disquisitions on economic connectivity and integration. For instance, Pakistan has argued that its ties with the United States must center on economic cooperation. Further, Pakistani interlocutors have time and again stressed that peace in Afghanistan is critical to enhancing regional connectivity. Finally, Islamabad has underscored the deleterious effects of New Delhi’s aggression and intransigence on regional integration.

With Pakistan focused on giving its foreign policy a new anchor in geoeconomics, it would not be wrong to contend that the country’s new narrative should comprise three refrains. First, Pakistan must effectively communicate to regional and global actors that it is a fundamentally safe country. Second, it must convince the world that steps are being taken to make the investment climate propitious and friendly. Third, Pakistan will play a prominent role in promoting peace, stability, and prosperity in the region. When woven together, these facets of Pakistan’s story will produce just about the right narrative that the country needs to become a respected geoeconomic power.

To its credit, Islamabad has repeatedly said it does not believe in zero-sum games when it comes to building relations with other countries. It has also shed light on its meritorious contributions to the war against terrorism. All this has been coupled with efforts to woo foreign investors, with a view to shoring up investments in Pakistan. That said, there is a lot more to narrative-building than making statements. That Pakistan’s new foreign policy direction needs a robust, viable narrative is one of the reasons why the country must prioritize rewriting its storyline. To rejig its narrative for strategic gains, Pakistan should commit itself to taking at least five steps.

First, Pakistan must look inwards, with a view to improving its domestic socio-economic scaffold. The significance of Pakistan putting its own house in order cannot be overstated, simply because a country’s story is only as good as its reality. Thus, if Pakistan wants to come across as a peaceful, investment-friendly country, it must commit itself to ensuring that elements and practices that vitiate such an environment are eliminated. With a view to not only projecting a positive image and the restoring confidence of the international community but also harmonizing its narrative with its strategic objectives, Pakistan must make two policy commitments.

Second, Pakistan cannot expect its narrative to spread and gain traction only through traditional diplomacy. Therefore, it is imperative for Islamabad to ramp up its public diplomacy drive. While it is encouraging to see that Pakistani officialdom is cognizant of the importance of strategic communications and public diplomacy, Pakistan needs to do much more to make them linchpins of its diplomatic repertoire. If anything, public diplomacy, coupled with targeted and carefully designed strategic communications, is critical to streamlining economic diplomacy. That economic diplomacy is one of the foci of Prime Minister Imran Khan’s foreign policy is reason enough to give further impetus to public diplomacy. Pakistan can directly reach out to publics around the world if it is able to not only dexterously use social media platforms, but also effectively use cultural diplomacy and other soft power propellants to its advantage. Absent all this, Pakistan will remain behind the eight ball, especially at a time when its adversary India has bolstered its public diplomacy campaign by leaps and bounds.

Third, Pakistan must bring in consistency and stability to its policymaking. Dithering over matters of policy will be detrimental to attempts aimed at presenting Pakistan as a state committed to turning a page in its domestic and foreign affairs. With a view to narrating its story, Pakistan must send clear, unequivocal messages to the world. This is necessary because equivocation on the part of Pakistan will be exploited by its nemeses, who have even otherwise launched well-targeted, multi-pronged disinformation campaigns against it. Giving mixed signals on important issues, including but not limited to Pakistan’s relations with India or its views on the Afghan Taliban, will damage the country’s narrative. This brings to the fore the importance of coordination between policy actors at the highest level in Pakistan.

Fourth, other than the need for having policy continuity, it is essential for Pakistan to adopt a whole-of-government approach. Pakistani interlocutors can ill-afford to dish out statements that deviate from the country’s official stance, not least because the world notices what government functionaries say. Therefore, government ministers must exercise caution in making remarks on matters that are critical to shaping Pakistan’s narrative.

Fifth, Pakistan must open itself up for academic inquiry. At a time when the country is trying to combat the scourges of mendacious propaganda, misinformation, and disinformation, it needs to take charge of its own narrative. Thus, Pakistani policymakers must enable and facilitate researchers to produce quality, nuanced, and balanced academic works on Pakistan. This will attenuate space for malign actors to control the all-important information landscape. Ace Pakistani strategic affairs scholar Dr Rabia Akhtar, while stressing the need for declassifying archives, argues that, “if we (Pakistanis) won’t write about ourselves, our enemy will do the honors, and, believe you me, nothing good will come out of it.” If and when Pakistan well and truly presents itself in front of academic and policy fraternities, it will not only be able to narrate its story more cogently but also be able to  counter fake news and disinformation.

As such, Pakistan—being rightly worried about resetting its narrative and changing its international image—needs to not only perform well at home but also reorient the way it communicates its exploits and views to domestic and global audiences. It must also be open to taking criticisms and plaudits alike. Pakistan can choose to snub only one of these strands at its own peril, especially because the information domain is already dominated by its detractors.

Syed Ali Zia Jaffery is a Research Associate at the Center for Security, Strategy and Policy Research (CSSPR), University of Lahore.

On Monday, November 22, 2021 the International Monetary Fund (IMF) and Pakistan reached a staff-level agreement to complete the sixth review under the $6 billion Extended Fund Facility, funding that has been stalled since April due to issues over the required reforms. Considering Pakistan’s historical struggles with currency devaluation, high inflation, dwindling foreign reserves, and more, completion of the review would make available 750 million in IMF special drawing rights, equivalent to $1 billion that would come as welcome relief. Below, South Asia Center experts share their analysis.