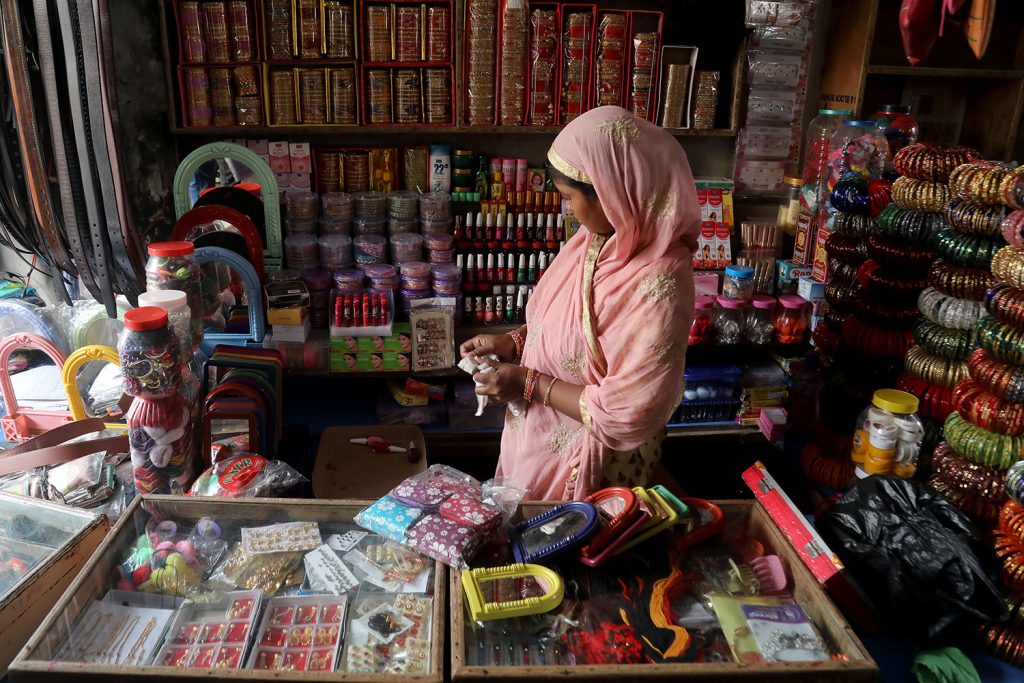 The reforms detailed in the seventy-page document are welcome measures, but they leave much to be desired. In total, it amounts to a laundry list of high-level ideas to transform the MSME sector, but it does not have any operational plans or concrete suggestions to convert those ideas into actions. MSMEs are a critical component of India’s economy and plans to enhance its position in global supply chains as the country looks to take on China. However, the government’s efforts to improve the global competitiveness of its MSMEs are still falling short despite their best efforts.

There are over sixty-three million MSMEs in India, contributing approximately 30 percent of the country’s total GDP; 40 percent of its manufacturing output; and close to 50 percent of its total exports (latest figures). Employing roughly 110 million workers, MSMEs hold significant importance for India’s economy. Naturally, the government of India provides incentives and relaxations to support MSMEs in the country.

As COVID-19 hit the world leading to international lockdowns, the Indian government announced significant relief measures for the MSME sector, hit severely by the pandemic. These measures mostly targeted short-term monetary and financial support, ensuring more liquidity was available for MSMEs hit by the pandemic. This was welcome relief to ensure that MSMEs stay afloat, and in fact, some of these measures have been extended into the current financial year. However, these measures are at best short-term relief, unlikely to fulfill the government’s larger goal of increasing India’s global competitiveness in the sector.

The pandemic hit India’s economy and MSMEs hard. While the national GDP contracted by 7.3 percent year-on-year during the first year of the pandemic (economic recovery in 2021 with a growth of 8.9 percent), the average decline in business volume of Indian MSMEs because of the pandemic in 2021 was 11 percent compared to a 46 percent decline in 2020. Numbers alone cannot capture the immense distress it caused the sector, one that employs so many people in the country. However, India’s economic issues and those surrounding the MSME sector precede the pandemic. Economic growth rate in India saw a steady decline between 2017 and 2018, almost three years before the pandemic struck.

Sometime during the same timeframe, unemployment in India stood at a 45-year-high. While the government blamed the global business cycles and other factors, independent experts have opined that the lion’s share of the blame for the economic downturn goes to the implementation of two policies: Demonetization (November 2016) and the Goods and Services Tax, or GST (July 2017). An RBI study acknowledged their negative impact on MSMEs. It concluded these policies adversely impacted the availability of credit (demonetization) and increased compliance costs (GST). This is a significant admission for a government that is not known to own up its mistakes. While the Indian economy has reached its pre-pandemic levels in size, it is only a start to put the MSME sector in order. It is thus imperative to go beyond this goal and address structural problems that plagued the sector before the pandemic or before demonetization and GST were implemented.

In addition, most of India’s MSMEs are informal in nature–the actual number of registered MSMEs is a small fraction of the estimated total number. Consequently, it becomes difficult for them to access formal financial channels and to connect to the global or national market. Enterprises under this segment also have the problem of lack of growth–over 99 percent of companies in the MSME segment are under the micro category, 0.5 percent under the small category, and 0.007 percent under the medium category.

Poorly drawn thresholds and perverse incentives make it non-lucrative for enterprises to scale. The government has redrawn these thresholds as a part of the COVID-19 relief package it announced in 2020 and further included service sector enterprises under the MSME category. However, this still does not solve another fundamental problem–dissimilar enterprises are clubbed under the MSME categorization impeding the creation/impact of targeted reforms and policies for the sector. These categorizations also club dissimilar companies in another way, by haphazardly lumping together enterprises across sectors, industries, and geographies. There is a need to unbundle these enterprises and create policy measures in a more targeted manner.

The next critical area related to MSMEs where intervention is required is how to help them avail the numerous benefits the Indian government offers to improve the country’s export competitiveness. Since the flagship Merchandise Exports from India Scheme (MEIS) was ruled illegitimate by the World Trade Organization, the government replaced it with a new compliance scheme named Remission of Duties or Taxes on Export Products (RoDTEP). Further, as a part of the newly announced Aatmanirbhar Bharat (“Self-Reliant India”) agenda, it announced several production-linked incentive (PLI) schemes to boost domestic manufacturing. The objectives of these schemes are two-fold: to provide support to domestic exporters and to incentivize local manufacturing. PLI schemes cover a wide range of sectors, including automotive, aviation, chemicals, pharmaceuticals, medical devices, white goods, and others. While MSMEs are able to avail the benefits of the RoDTEP scheme, the impact of the PLI scheme on the MSME sector has been limited. Indian MSME representatives believe that only large investors can benefit from the PLI scheme. There is thus a need to have a similar scheme for manufacturing MSMEs or help them become a part of the existing program. As India seeks to enhance its manufacturing capabilities and become a part of global supply chains, its approach should not be limited to inviting large global players into India. It also needs Indian players to go international–PLI schemes may help solve a part of the problem.

Critical to solving this puzzle is helping India’s MSMEs become more efficient using technology. Due to their informal nature, many Indian MSMEs cannot avail the full benefits of India’s focus on digitization. To the government’s credit, it has launched several schemes and portals to benefit MSMEs: the Udyam registration portal makes the registration process simpler, the CHAMPIONS portal helps the smaller units become big by helping and hand holding them, and the RAMP (Raising and Accelerating MSME Performance) scheme improves the productivity of MSMEs. The government has also launched programs to expand and grow digital payments and fintech amongst MSMEs. In the latest Union Budget, the finance minister announced the interlinking of these different portals to enhance their impact. While several of these programs are good in design and intention, their efficacy is impeded by the informal nature of the sector and lack of awareness. There must be a mission mode application of these schemes to ensure they do not just remain portals without users and impact. As the experience of GST and demonetization has taught us, formalization of the sector cannot be done through hard diktats but requires direct outreach and awareness programs.

It is important to realize that, like any intervention, promoting MSMEs through policy and programs requires a significant budget outlay. However, like many countries, India is facing a budget crunch due to COVID-19. India’s fiscal deficit stood above 9 percent in the first year of the pandemic. While the situation has improved in the second year, the fiscal room for the government will continue to be limited for a few more quarters. Therefore, it is imperative that the private sector is roped in to enhance government interventions.

India wants to replace China as the manufacturing capital of the world. However, there were significant reasons for the success of the Chinese industrial sector that made it the world’s manufacturing capital. A documented reason for this success is the impact of Chinese e-commerce and, more importantly, the success of Alibaba that took China’s products across the globe. Before Alibaba came along, Chinese manufacturers were already succeeding due to a long-term industrial push by Chinese leadership. However, Alibaba’s Business-to-Business (B2B) e-commerce platform connected exporters worldwide with small Chinese manufacturers and opened doors for new opportunities and growth. Alibaba transformed villagers across the length and breadth of China into micro-entrepreneurs. Scores of villages leveraged this opportunity and turned into clusters specializing in products and eventually became known as “Taobao village,” named after the famed e-commerce platform by Alibaba. These villages are also suppliers to other large retailers like Amazon and Walmart apart from Alibaba.

There is no parallel to this phenomenon in India, which traditionally has had many clusters specializing in products for centuries that aren’t well-known globally, barring a few exceptions. Instead, its e-commerce market is dominated by Amazon and Walmart-owned Flipkart. However, this doesn’t mean India cannot replicate the Alibaba model. Policymakers realize this potential and have come up with concepts of “one district, one product” aimed at cluster-led industrial development and developing districts as export hubs. These schemes need to be implemented on a war footing if India is serious about displacing China as the world’s manufacturing capital. Traditional industries must be trained in e-commerce, and e-commerce companies need to be provided incentives and infrastructure to bolster e-commerce exports from the country. Indigenous B2B platforms with business models like Alibaba’s need to be supported to scale up. These interventions require policies and programs beyond what the current MSME or the draft National E-Commerce Policy proposes.

The last critical step to boost Indian MSMEs is to connect them to the global markets through trade deals and agreements. Lately, India has made good progress on this front. After refusing to sign up for the Regional Comprehensive Economic Partnership (RCEP), India is in the process of finalizing trade deals with several vital trading partners. It recently signed a Free Trade Agreement (FTA) with the United Arab Emirates, with talks for an FTA with Australia and the United Kingdom at an advanced stage. The Indian also Government expects potential FTAs with the European Union, Canada, and several other trading blocs. These deals are likely to open new opportunities for India’s exporters and, specifically, its MSME sector. However, as it was evident during RCEP negotiations, to fully avail the benefits of these deals, Indian MSMEs will need hand holding to make them globally competitive in terms of quality and pricing.

As India looks to revolutionize its MSME policies, it must pay attention to these gaps, failing which these policies will remain ideas with limited action and impact. For global companies, India’s push for MSMEs is an untapped business opportunity that could have a far-reaching impact.

Adnan Ahmad Ansari is an Associate Vice President at 9.9 Insights, a policy and strategy consulting firm based out of New Delhi, India. Views are his personal.

Modi faces a critical test in India’s most populous state

2022 will witness one of the most critical Indian elections in recent memory–for the ruling Bharatiya Janata Party (BJP) and for India’s democracy.

Image: Indian vendor waits for the customers for her bangles on the roadside market during International Women's Day. Photo by Naveen Sharma / SOPA Images/Sipa USA via Reuters