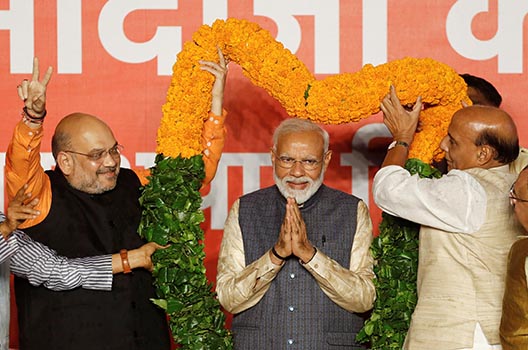 Unlike the United States, India does not have the concept of mid-term elections. The Lok Sabha (Lower House) of its parliament is chosen directly by the people every five years. Members of the Rajya Sabha (Upper House) are elected on a rolling basis through indirect elections by the legislative members of states. However, a rolling calendar of state level elections provides an opportunity for opposition parties to test the government’s popularity. The upcoming February-March elections in the state of Uttar Pradesh (UP)–India’s most populous state–will be a major test for Prime Minister Narendra Modi’s Bharatiya Janata Party (BJP), which has become the dominant player in UP’s politics. A victory will further cement the BJP’s control over Indian politics, primarily because the road to power in Delhi usually goes through Uttar Pradesh.

Prime Minister Narendra Modi understands the importance of UP: this is why he chose Varanasi–a quaint old religious city in UP–as his constituency over his home state of Gujarat, where he built a reputation that ultimately propelled him to power as India’s prime minister. The prioritization of UP makes sense: the state elects eighty out of the 543 members to India’s lower house of parliament. UP’s legislators also send thirty-one of the 245 members seated in the upper house of parliament. In 2014, when Modi became the first prime minister in thirty years to be elected with an absolute majority, 25 percent of his party’s 282 legislators were elected from UP. However, apart from the statistical importance of UP for electoral fortunes in India, the upcoming election is critical for another reason–it may decide a potential successor to Modi in the ruling BJP and, by extension, a future national leader in Indian politics.

The BJP won a thumping majority with 325 seats during the 2017 elections held in UP and Modi’s massive victory in the 2014 general elections was a major tailwind for the party. The BJP, which had not decided on a chief ministerial candidate before the polls, chose to appoint Yogi Adityanath as the chief minister of the state. It signaled a crossing of the Rubicon since Yogi Adityanath divides opinion unlike any politician in India.

Yogi Adityanath is a Hindu priest turned politician who heads a prominent temple in eastern Uttar Pradesh. In poll documents submitted during the 2014 general elections, he declared that several criminal cases with serious charges had been filed against him. His supporters point out that most of these charges are political in nature filed by opposition governments, seeing as Yogi has not been convicted of any crimes. Pratap Bhanu Mehta, political expert and a regular columnist in the daily Indian Express, once described Yogi as “the single most divisive, abusive, polarizing figure in UP politics.”

On the other hand, Yogi’s supporters praise his administration for turning the tide in one of India’s most underdeveloped states. UP has a population of roughly 240 million, which is more than the population of Brazil. The state is home to one-sixth of India’s total population. The state’s Human Development Index (HDI) is comparable to that of Cambodia and it also ranks poorly in various indexes, including those measuring corruption and governance. Yogi’s supporters view him as a messiah who is changing the destiny of their state and combating crime, corruption, and fear that has been the historical norm. They point out how UP has seen an increase of 21 percent in Foreign Direct Investments (FDI) since Yogi assumed power. Opposition calls it hogwash and alleges the increasing violence against minorities and lower castes under his rule.

In some ways, Yogi resembles the leader of his party–Narendra Modi. He is a hard taskmaster, an efficient administrator, unmarried, and has a personality that is viewed as being above reproach. Both are admired and loved by the core voter base of the BJP to the point of religious devotion. On the other hand, critics accuse both men of being communally divisive. Thus, Yogi is considered the heir apparent to Modi by many, and rightly so. He is a star campaigner for the BJP in most state elections and no other leader apart from Modi attracts such packed crowds in rallies. However, unlike Modi, Yogi has not built a statesmanlike image acceptable to a global audience. And, also unlike Modi–who won three consecutive elections as Chief Minister of Gujarat–he has yet to win his party a major election under his leadership.

If Yogi improves or repeats the BJP’s performance in the last elections, it will strengthen his position in the party and national politics. UP is not kind to incumbent chief ministers, meaning that even a marginally poor performance that wins the state for BJP would be seen as a major personal victory for him. A victorious and emboldened Yogi would soon start pushing for a claim to the Prime Minister’s Office: Modi is seventy-one years old and will hang his boots at some point in the near future.

On the other hand, if Yogi manages to lose the upcoming elections for the BJP, it will be a whole new world. It would be the first significant loss for the BJP since coming back to power in 2019. It would lead to questions on Yogi’s personal leadership style and handling of the state’s caste equations, which is central to Indian politics. It would also have a far-reaching impact on the upcoming general elections scheduled in 2024.

Predicting elections is a tough job anywhere in the world. Predicting them in India is probably the toughest. However, it would be fair to say that the BJP holds a clear advantage. The defections of some leaders, the UP government’s handling of the pandemic, anemic economic growth in the past few years, and the year-long farmers’ protests have made the election more challenging for the BJP, but defeating the incumbent Yogi government is still an uphill task for opposition parties. Everything said and done, Modi’s popularity remains high, and most people vote for Modi rather than who is on the ballot. No other political party in India has the funds, on-ground cadre, or political machinery to match the BJP. Its loss in these elections is possible but seems improbable at this stage.

Elections are as much an exercise in math and statistics as they are in politics. The BJP’s vote share in the past three UP elections has hovered between 40 and 49 percent. The last time the BJP lost an election in UP was in 2012 when it received about 15 percent of the vote; the winning party received almost 30 percent.

In 2022, a quadrangular contest is emerging. The BJP faces the regionally strong Samajwadi Party and Bahujan Samaj Party, as well as a weakened Congress party that is a shadow of its former self. It is thus difficult to imagine a tectonic vote shift in these times that would result in the BJP’s loss. Though such shifts are possible in a “wave election” like in 2014 when Modi came to power, there are no signs to suggest that there is a strong enough anti-BJP wave to turn the election against the incumbents. But elections are also an exercise in optimism, and stranger things have happened in Indian politics. The opposition parties would like to believe that they have done enough to build a wave against the BJP.

In conclusion, this is one of the most critical elections in recent memory–for the ruling BJP and for India’s democracy. March 10, 2022, the day of election results, will be a busy day in India.

Adnan Ahmad Ansari is a policy and political analyst based in New Delhi, India. Views are his personal.

USTR Katherine Tai is set to visit India on a two-day visit from November 22 for talks with Commerce Minister Piyush Goyal, particularly to reconvene the Trade Policy Forum dialogues after a four year gap. The US-India trade talks are the Biden administration’s first serious stab at remedying trade tensions.