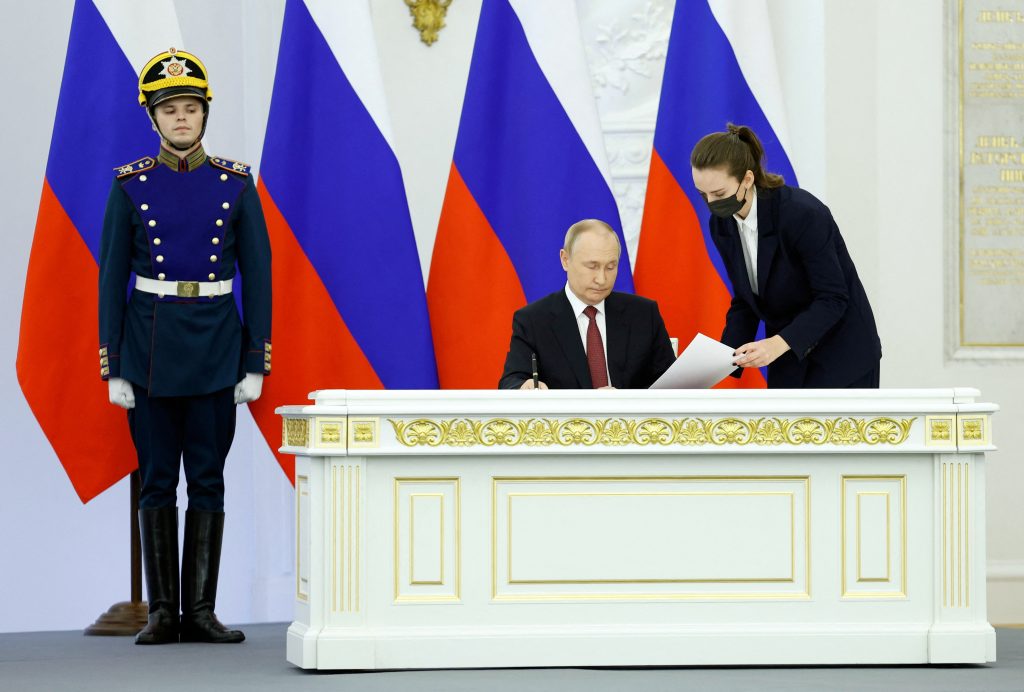 Putin Annexes Parts of Ukraine.  In a choreographed ceremony at the Kremlin, Russian president Vladimir Putin signed decrees claiming annexation of four Ukrainian provinces in the south and east of the country, even as Russian troops continued to lose ground in these areas. Despite apparent doubts about the war from the leaders of China and India, Putin announced the mobilization of 300,000 additional troops, committing to defend the claimed territories and hinting at the possible use of nuclear weapons, a prospect that US National Security Advisor Jake Sullivan warned would result in “catastrophic consequences” for Russia. The G7 issued a strong statement vowing never to recognize the annexations or the “sham” referendums that preceded them.

Axis of Autocracy.  Meeting on the sidelines of the Shanghai Cooperation Organization (SCO) Summit in Uzbekistan, Putin and Chinese president Xi Jinping renewed their commitments to expand bilateral cooperation. While Putin publicly recognized China’s concerns about the war in Ukraine, Xi underscored Beijing’s “strong support on core interests” of Russia.  The SCO summit brought together the leaders of China, Russia, Iran, Belarus, and other anti-Western autocracies, but also India and Pakistan, and resulted in a joint statement of cooperation on counter-terrorism and other issues. Earlier, Chinese military forces participated in Russian-led exercises in the Sea of Japan, and North Korea offered to provide weapons to Russia to support the war in Ukraine.

Iran’s Nationwide Protests.  In the country’s largest anti-regime protests since 2009, Iranians took to the streets following the death of a young woman who died in the custody of Iran’s “morality police” after failing to comply with strict veiling laws for women.  In response to the protests, which were led by students across more than 45 cities, many shouting “death to the dictator,” Iranian security forces killed scores of protestors. With the Iran nuclear talks stalled, President Biden stated that the United States stands with the “brave women of Iran,” and the US and the EU considered new sanctions against the regime.

Image: Russian President Vladimir Putin attends a ceremony to declare the annexation of the Russian-controlled territories of four Ukraine's Donetsk, Luhansk, Kherson and Zaporizhzhia regions, after holding what Russian authorities called referendums in the occupied areas of Ukraine that were condemned by Kyiv and governments worldwide, in the Georgievsky Hall of the Great Kremlin Palace in Moscow, Russia, September 30, 2022. Sputnik/Dmitry Astakhov/Pool via REUTERS