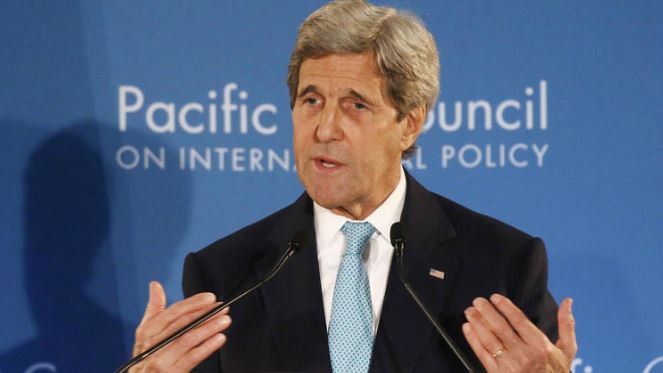 Secretary of State John Kerry concluded a global trip in Los Angeles this week and spoke at the Pacific Council on International Trade to defend international free trade deals, criticizing the current presidential candidates for playing up on “fear and anger.”

Do you like staying up-to-date on transatlantic trade issues?  Interested in having TTIP & Trade in Action emailed to you weekly?

Make you tax-deductable donation to support TTIP & Trade in Action

Photo Source: @EU_TTIP_team
It’s official: The 13th TTIP Negotiation Round is happening in New York, USA, from April 25-29. Interested in getting feedback and giving input to TTIP negotiators in New York? Sign up for the Stakeholder Forum! There will also be a press conference on Friday 29 April to discuss outcomes from the negotiations. More info here.
Simultaneously, President Obama will be in Hannover, Germany, attending the world’s largest industrial trade fair. (The White House)

“As times change, our relationship has to adapt to new challenges and to new opportunities. TTIP will do this by implementing commonsense reforms to remove tariffs, eliminate red tape for goods that crosses borders, and promote services enabled by the internet – all the while upholding consumer, environmental, and labor protections consistent with our shared values.” – Secretary of State John Kerry

In a speech at the Pacific Council on International Policy earlier this week, Secretary of State John Kerry talked about the geo- strategic importance of TTIP and the TPP for the United States, insisting that “foreign policy is economic policy and economic policy is foreign policy.”  Secretary Kerry will travel to Europe in the upcoming days to make the case for TTIP, emphasizing that nothing in TTIP lowers standards or voids regulations. (US Department of State)

America and the Global Economy: The Case of US Leadership

“The United States is continuing to modernize the global trading system by pushing for innovative features in new trade agreements that can eventually serve as global standards to meet the needs of a complex and evolving world economy.” – Treasury Secretary Jack Lew

US Treasury Secretary Jacob Lew published a long-form article in Foreign Affairs this week, outlining the case for American leadership in the global economy. In the piece, Secretary Lew underscores how US leadership of the global economic system has produced remarkable economic successes over the past 70-plus years, and why sustaining that economic leadership and adapting it to the challenges of our time are critical to future US and global stability and prosperity. (United States Department of Treasury)

Secretary of State John Kerry stopped off in Los Angeles after a round-the-world trip to make an impassioned case for TTIP and the TPP. He added that he would head to Europe in the coming days to make the case for TTIP. Kerry’s speech came as the International Monetary Fund issued a downbeat report warning that mounting opposition to free trade in the United States and Europe represents a threat to the global economy. (Euractiv)

In a panel discussion last week, Hungary’s Central Bank Governor, Marton Nagy, remarked that “Hungary would be a clear beneficiary of the TTIP due to the car industry.”  The auto industry accounts for more than one fifth of industrial output in Hungary and employs over 100,000 people.  According to Nagy, TTIP is projected to increase Hungarian GDP by 0.1% in conservative estimates and 0.3% in the most optimistic. (Reuters)

UK Member of Parliament Rachel Reeves voiced her support for TTIP and played down fears that it will infringe on aspects of UK national institutions. Reeves insisted that the TTIP issue is being manipulated by those who want to leave Europe to persuade voters to back the exit of Britain from the European Union. Instead of harming the United Kingdom, TTIP would open up the American market to British companies, creating opportunities for business that will boost jobs and growth here at home. (The Yorkshire Post)

Would you like to hear how you can get involved and partner with the Atlantic Council and our trade work? Click here and learn more!

TTIP: Benefits for Workers, Consumers, and Companies on Both Sides of the Atlantic

European Commissioner for Trade Cecilia Malmström wrote an article for the Alliance of Liberals and Democrats for Europe’s (ALDE) quarterly publication The Liberal Bulletin. In the article, Malmström touches on the increased importance of services and data flows to modern cross border trade, and how modern trade deals like TTIP are required to reflect this change. She emphasizes that “Free trade is one of the fundamental liberal ideas that need to be vehemently defended in times when populists claim that we can protect the freedom and prosperity of European countries by shutting borders and isolating ourselves from the world.”(Alliance of Liberals and Democrats for Europe)

Christian Odendahl and Rem Korteweg of the Centre for European Reform published a policy brief to shed light on the influence of TTIP on global standards and multilateralism. To them, the next step is for TTIP supporters and critics alike to acknowledge TTIP’s global dimension. Concerning the current public resistance in some European member states, the authors insist that it would be a mistake if legitimate public concerns turned into misguided resistance to the entire agreement and call for a constructive dialogue between the negotiators and the public. (Centre for European Reform)

Secretary of State John Kerry spoke at an event organized by the Pacific Council on International Trade in Los Angeles this week, where he defended both the TPP and TTIP, but gave particular attention the TPP saying, “When you add it all up, the economic case for TPP is actually not even a close call in my judgment, it’s overwhelming.” (BBC)

Agriculture Groups Call on Congress to Pass TPP This Year

In a letter to congressional leaders, 225 US food and agricultural groups called on US lawmakers to move forward on the 12-nation Trans-Pacific Partnership before President Obama leaves office.The groups argue that the TPP will not only remove barriers to the 11 Asia-Pacific countries, but the agreement will also provide the leverage needed to eventually acquire market access with other potential TPP members such as Taiwan, the Philippines and Indonesia. (The Hill)
Brady Wants Congress to Pass TPP ‘Sooner’ if Issues Can be Resolved
Talking about the TPP earlier this week, the Chairman of the House Ways and Means Committee, Kevin Brady (R-Texas) said, “If the White House can solve the problems, and there’s about four or five key ones left — if they can solve those problems and build support, I’d like to see this move sooner rather than later“. Although Congressional Republican leaders have said the TPP probably won’t get a vote until after the November elections, Chairman Brady insists that ” the substance and the support’s going to drive it. That will drive the timing“. (The Hill)

Economic Damages of a Brexit Underestimated

Cologne Institute for Economic Research’s (IW Köln) economist Jürgen Matthes writes that the economic damage of a Brexit could be significantly higher for the United Kingdom  than many people assume.  IW Köln argues that the pertinent forward-looking theoretical models are unable to capture many important advantages of economic integration between the United Kingdom and the European Union. Overall, a net economic damage in the order of 10 percent of economic output and more cannot be precluded in a more pessimistic scenario in the longer run. Much will depend on the legal basis the United Kingdom would have for doing business with the European Union after a Brexit. (IW Köln)

The International Monetary Fund (IMF) reports that a Brexit could disrupt trade relationships and create “major” challenges for the United Kingdom and the European Union.  Subsequently, they have reduced their projected annual growth of the United Kingdom from 2.2% to 1.9%, and said that the referendum has already created uncertainty for investors.  Furthermore, an economic counselor to the IMF and BBC’s chief economist, Maurice Obstfeld adds that there could be “severe regional and global damage” should the Brexit occur. (BBC)

Why the Case for Trade – and Against Protectionism – Remains Strong

Myron Brilliant, the Executive Vice President and Head of International Affairs at the US Chamber of Commerce, debunks calls for economic protectionism in the next Presidential administration. Moody’s Analytics modeled the effects of Trump’s proposed double-digit tariff on imports from China and Mexico and found that up to 4 million American’s would lose jobs.  Although there is major room for improvement in federal and private job transition assistance, global trade remains an irreplaceable pillar of the American economy.  (US Chamber of Commerce)

Seminar – TTIP: Myths and Realities – April 19, hosted by the Movement of the Enterprises of France (MEDEF) in Paris – More Information
The End of Trade of We Know It? – May 5 & 6, hosted by George Washington University and The World Bank – More Information
The next round of TTIP negotiations have been scheduled for April 25 in New York – More Information
Stakeholders may make presentations to the chief negotiators in an  event open to the press –Register here
Registered stakeholders may attend a briefing with chief negotiators that is closed to the press –Register here
There will be a press conference at the conclusion of the event – Register here
Please send us suggested news stories, opinion pieces, publications, and upcoming events that you would like us to highlight!
Email [email protected] with your ideas and suggestions.
This website or its third-party tools use cookies, which are necessary for its functioning and required to achieve the purposes illustrated in the cookie policy.