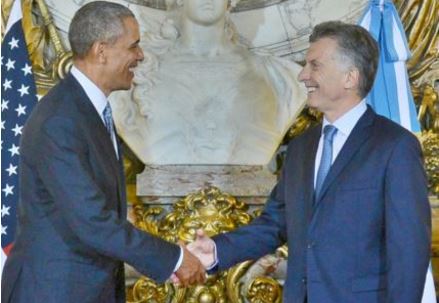 Last week President Obama visited Argentina. He praised new Argentine President Mauricio Macri for his swift implementation of reforms during his first 100 days in office. Obama said the two governments would work to identify barriers impeding greater trade flows between the two economies, adding that a free trade agreement was something that might lie at the end of the process. (Reuters)
The Atlantic Council will host Argentine Finance Minister Alfonso Prat-Gay on April 14, at 12:30 for a public speech and a moderated discussion. To RSVP and for further info, please click here.

Do you like staying up-to-date on transatlantic trade issues?  Want to have TTIP & Trade in Action emailed to you?

The Twelfth Round of TTIP Negotiations: Public Report – March 2016

“Parties agreed on accelerating their work between negotiating rounds with a view to picking up the pace of negotiations at large. Two additional fully fledged negotiation rounds are planned between now and the summer break. The pivotal and overarching objective is to negotiate an ambitious, high standard TTIP agreement that responds to both EU and US interests.” – European Commission The European Commission published their report of progress made during the 12th round of TTIP negotiations held in Brussels in February. As part of the overall intensification of talks, this round stretched into a second week as the United States and the European Union exchanged government procurement offers and continued discussions on rules of origin as well as intellectual property rights. The negotiators particularly focused on two of the three pillars of the agreement: regulatory cooperation and rules. (European Commission)

In the 12th round of TTIP negotiations, the negotiating parties agreed on accelerating their work between rounds with a view to picking up the pace of negotiations at large. Two additional fully fledged negotiation rounds are planned between now and the summer break, with the next round most likely for the end of April. The pivotal and overarching objective is to negotiate an ambitious, high standard TTIP agreement that responds to both European Union’s and US interests. The European Union reiterated its intention to ensure substantial progress be made in all three pillars of the agreement by the summer break. (European Commission)

With Brexit, Britons Would Lose Out

Former US Ambassadors to the European Union and members of the Atlantic Council’s EuroGrowth Task Force, Stuart Eizenstat (co-chair) and Richard Morningstar, co-authored an op-ed in the German newspaper Handelsblatt about the negative effects of a Brexit for Britons. To them, the key question which will determine whether Britain exits from or remains in the European Union is how ordinary Britons perceive the effects on their lives of either course. While an exit from the European Union has a lot of downside with no upside from an economic standpoint, it would also have strategic implications as well as negative effects on Britains relationship with the United States. The authors strongly suggest that the political message must continue to be sent from Washington, from other capitals, and from within Britain itself, that a Brexit would be a huge mistake for the average British citizen. (Handelsblatt)

TTIP Beyond the Beltway: American Perspectives

“TTIP Beyond the Beltway: American Perspectives” is a cumulative report by the Bertelsman Foundation presenting the findings of research conducted through a series of town hall-style meetings in five different states in every corner of America. The project convened EU and US trade representatives with local stakeholders all across the country. It concluded that rather than being for or against the agreement, general awareness of TTIP beyond the DC beltway is low- overcoming that may be just as important as concluding negotiations. (Bertelsmann Foundation)

Not Your Parents’ Trade Politics: The TTIP Negotiations

Dr. Alasdair Young, the Co-Director of the Center for European and Transatlantic Studies at Georgia Tech University, authored the report “Not your Parents’ Trade Politics”, highlighting that the politics associated with the TTIP negotiations are distinctive from those of other PTAs in two ways: the prominence of transnational business alliances and the vigor of civic interest opposition. Moreover, these distinctive features of TTIP trade politics are at odds with the dominant IPE account of trade politics,which focuses on national  contestation between export-oriented and import-competing firms. (Taylor & Francis Group)

This week, the Peterson Institute for International Economics released the second volume in its series of briefs analyzing the TPP as part of their effort to better inform the public for the debate of over the agreement.  Volume 2 analyzes the innovation and how TPP provisions build on past practice. The authors conclude that TPP – in some areas incrementally and in other areas extensively- overall improves existing international trade laws and is a good platform upon which to build future trade agreements. (Peterson Institute for International Economics)

This report from the E15 Initiative, an initiative jointly implemented by the International Centre for Trade and Sustainable Development (ICTSD) and the World Economic Forum, observes that the fragmented international investment law regime is moving toward harmonization. Against this background, the authors argue that the Pacific Rim region is well placed to serve as the center of gravity for further harmonization because recent state treaty practice in the Pacific Rim reflects a significant — and increasing — amount of support for investment liberalization. In addition, investment law harmonization in the region is expected to be achieved through regional free-trade agreements, rather than bilateral investment treaties. (E15)
A Chain Reaction? Effects of Mega-Trade Agreements on Latin America
This new Bertelsmann Foundation study  seeks to predict the effects of the newest wave of free trade agreements on Latin America. The regional mega-deals currently under negotiation provide an opportunity for countries to enhance their integration in global value chains. This is particularly relevant in Latin America, where cross-border value chains have been largely absent due to the long shadow of import substitution industrialization policies. The report concludes that the mega trade deals could have a tangible effect on the composition and direction of Latin American trade flows but that effects will vary by country based on individual levels of development and integration with larger trade powers. (Bertelsmann Foundation)

The direct link to the survey can be found here.

This week, The Economist published a brief describing the difficulties the United Kingdom would face negotiating new trade deals should they opt for the Brexit. This brief argues that the European Union would have a big incentive to be unhelpful with negotiating a new trade deal, for fear that other countries might copy Britain in leaving. In addition, Britain would probably have to replace all of the European Union’s 53 free-trade pacts and would be excluded from new deals that several big countries, including America, China, and India, are currently negotiating with the European Union.  (The Economist)

Transatlantic Association for Trade and Investment  – March 31, hosted by the Consulate of Spain in San Juan, Puerto Rico, with the delegations of the European Union and United States and the Association of Industries of Puerto Rico, at the Metropolitan University of Cupey  – More Info
Webinar on TTIP – April 6, hosted by the Trans-Atlantic Business Council and IBT Partners – More Info
WITA TPP Series: Digital Trade – April 7, hosted by the Washington International Trade Association (WITA) in Washington, DC – More Information
And don’t forget: Two more rounds of TTIP negotiations are coming up before the summer of 2016!
Please send us suggested news stories, opinion pieces, publications, and upcoming events that you would like us to highlight!
Email [email protected] with your ideas and suggestions.
This website or its third-party tools use cookies, which are necessary for its functioning and required to achieve the purposes illustrated in the cookie policy.