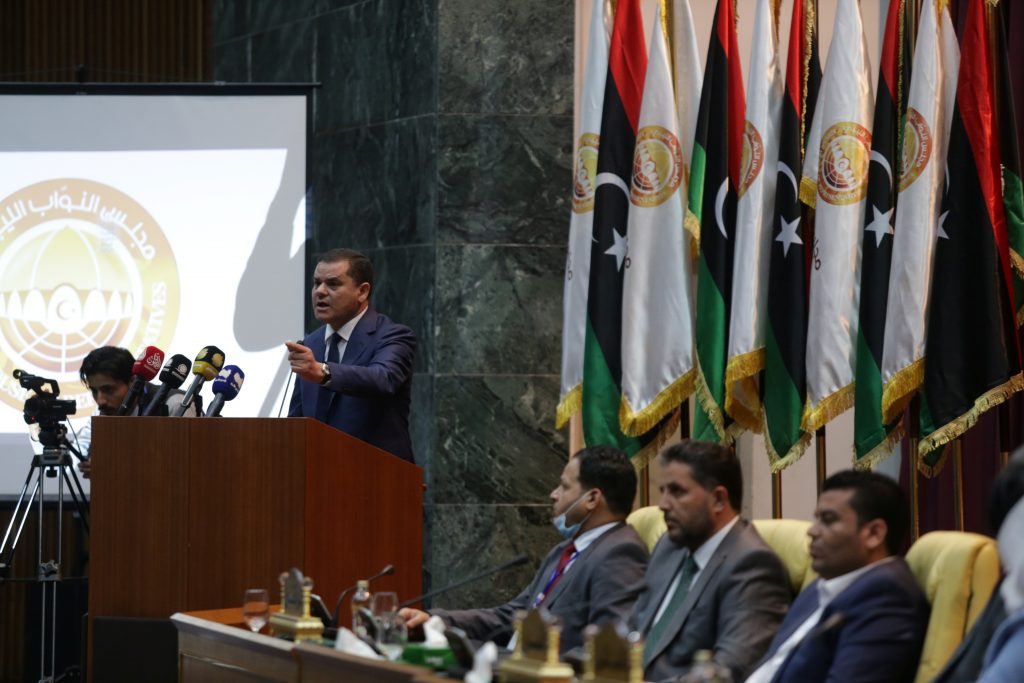 The new Libyan leadership’s early moves on the international stage are leaving the impression that it’s open for business with anyone. But that image comes with some caveats.

After receiving a number of European leaders and dignitaries since he was sworn in in mid-March, interim Prime Minister Abdel Hamid Dbeibeh embarked on several trips abroad, including to the Gulf, Turkey, and Russia. In so doing, Dbeibeh conveyed a clear message to the international community: Europeans should come here to talk to us; however, we are going to Abu Dhabi, Ankara, and Moscow to talk with the real kingmakers of the new, yet still fragile, Libyan order.

Dbeibeh’s trip to the United Arab Emirates (UAE) is a clear sign that the Emiratis remain crucial to Libya’s balance. In fact, even though their protégé Khalifa Haftar, the eastern Libyan warlord, has been defeated militarily and partially marginalized politically, it would be a mistake to ignore him, as he is down but not out. The UAE pledged to support the Dbeibeh government, even though it continued to help Haftar in several ways after his defeat. After Turkey, Dbeibeh flew to Moscow, accompanied by his ministers of foreign affairs and oil and gas, along with Libya’s chief of the general staff, Lt. Gen. Mohammed al-Haddad, a clear indication of the priorities shaping the relationship.

But the most pivotal partner to this emerging Libya is Turkey, as was made clear from Turkish President Recep Tayyip Erdoğan’s over-the-top welcome of the new Libyan leader. Officially, Dbeibeh went to Turkey for the first meeting of the joint Strategic Cooperation Council, in what media sources close to the governing Justice and Development Party (AK Party) defined as a “critical” visit. It is evident, however, that Turkey wanted to send a message that despite the change of government in Libya, its relationship with Tripoli remains special.

The unusually high-level Libyan delegation included five deputy prime ministers and fourteen ministers, among them the ministers of foreign affairs, finance, and economy and trade. The new Libyan foreign minister, Najla Mangoush, also had a bilateral meeting with her Turkish counterpart, Mevlüt Çavuşoğlu.

In this meeting, the two countries reiterated the significance of their 2019 maritime memorandum of understanding (MoU). This development is even more remarkable in the wake of the April 14 announcement that Greece and Libya agreed to resume talks on defining maritime boundaries. So far, the new Libyan government seems to be willing, in words, to accommodate its neighbors’ requests, but actual policy remains unsettled.

The Libyan and Turkish delegations also agreed on five new MoUs, which included projects in education, energy, media, and reconstruction. While many thought that the end of the Government of National Accord (GNA) led by Fayez al-Sarraj also meant a reduction of Ankara’s influence over Tripoli, the truth is to the contrary, as these agreements show.

Military cooperation is set to remain a central, yet slightly controversial, issue in relations between Ankara and Tripoli. As the political transition in Libya moves forward, “all foreign troops and mercenaries” should also leave the country, as per the ceasefire agreement and United Nations resolutions. The goal should be to help Libyans build reliable and effective national security forces with no permanent presence of foreign troops.

Turkey’s regional rivals hope that its forces withdraw soon from Libya, but they are likely to be frustrated in the short term. Turkey has stressed that it remains committed to providing training to Libyan forces in fulfilment of its agreements. Yasin Aktay, a deputy chairman of the AK Party and one of Erdoğan’s top aides, made it clear that Turkey has no plans to leave and that it believes its presence serves to stabilize the situation.

The Turkish Ministry of Defense, while announcing a training on “underwater defense,” stressed that the two countries share “500 years of common history.” This passage is extremely important to understand Ankara’s point of view on Libya, although it must be put into context. History is indeed important, but Turkey did not intervene in Libya for its neo-Ottoman links or to revive any imperial ambition.

Turkey has helped the GNA fend off Haftar’s military offensive since it began in April 2019.  Yet the deepening of these relations—a structural shift in their quality and intensity—came as the Turks were partially de-escalating in the fall 2019 when they were unhappy with the GNA and increasingly concerned about Syria.

The November 27, 2019, MoU was thus a turning point, and it was paradoxically the product of two weaknesses: the mounting isolation Turkey was facing in the Eastern Mediterranean, and the GNA perception that mercenaries from the Russia-linked Wagner Group would tilt the balance of the conflict in favor of Haftar’s forces.

The two nations’ agreements on maritime borders and the delimitation of Exclusive Economic Zones were born out of these dynamics and essentially became the price of Turkey’s military rescue. The fact that Turkey immediately pushed the new Libyan interim government to renew its commitment to these agreements shows how significant they are.

For many in Europe, Turkey’s rise as the main protector of Tripoli came as a shock. But while the Turkish role has increased in importance over the past ten years, the Turks see their presence in Libya as natural. In the perception of the Turkish leadership, this return marks the end of the order established by the 1912 Treaty of Ouchy, when the Ottomans were kicked out of Libya. While this treaty might not be as significant as more painful diplomatic treaties in Turkish history, such as those of Karlowitz, Küçük Kaynarca, and Sèvres, it still formally marked the end of the Turkish presence in North Africa.

Turkey has little incentive to dismantle its military presence in Libya anytime soon, particularly if the situation in the Eastern Mediterranean, which pits Turkey against Greece and Cyprus, and tensions with countries such as Egypt and the UAE continue to represent a significant strategic concern and a diplomatic headache for Ankara. From this point of view, the recent rapprochement between Ankara and Cairo that will likely result in an official visit in May, and the Ramadan phone call on April 22 between Foreign Minister Çavuşoğlu and his UAE counterpart, Sheikh Abdullah bin Zayed Al Nahyan, are steps in the right direction to create the conditions for the withdrawal of foreign troops from Libya.

The international community’s demand that all foreign forces and mercenaries leave Libya, as per the April 16 UN Security Council resolution 2570, should be qualified. In the specific case of Turkey, its forces were called in by the legitimate government in Tripoli—a call that was unanswered by other countries—to defend it from a rogue attack by mostly foreign irregular forces operating under Haftar’s orders. So far, the Turks have done a good job in quietly helping restructure the Libyan army and police forces, and they are playing a reassuring role with the otherwise riotous Tripoli militias. All of this is reinforced by the latest events in Benghazi, which saw Haftar’s militias refusing to allow the prime minister’s security team to land unless Dbeibeh was willing to go to Haftar’s headquarters and pay homage to his authority, according to a high-level Libyan source who asked to remain anonymous. Instead, Dbeibeh canceled the trip. This incident proves the importance of keeping Turkish forces in support of the legitimate UN-backed government to deter Haftar’s eventual rogue actions.

For Ankara, this military presence helps safeguard broader strategic goals in the Mediterranean and the Gulf. If the ongoing diplomatic rapprochement with Egypt and the UAE is successful, Turkey will see little value in supporting a permanent military presence in Libya, particularly in times of economic trouble. If this diplomatic dialogue fails, Turkey will have a greater incentive to stay.

It is thus in the interests of all the actors involved to build on this early diplomacy and create more fruitful cooperation across the Eastern Mediterranean and Persian Gulf, while allowing Libyans to regain control of their destiny.

Karim Mezran is the director of the North Africa Initiative and a senior fellow with the Rafik Hariri Center and Middle East Programs at the Atlantic Council.

Dario Cristiani is the IAI/GMF senior fellow at the German Marshall Fund of the United States and Istituto Affari Internazionali.