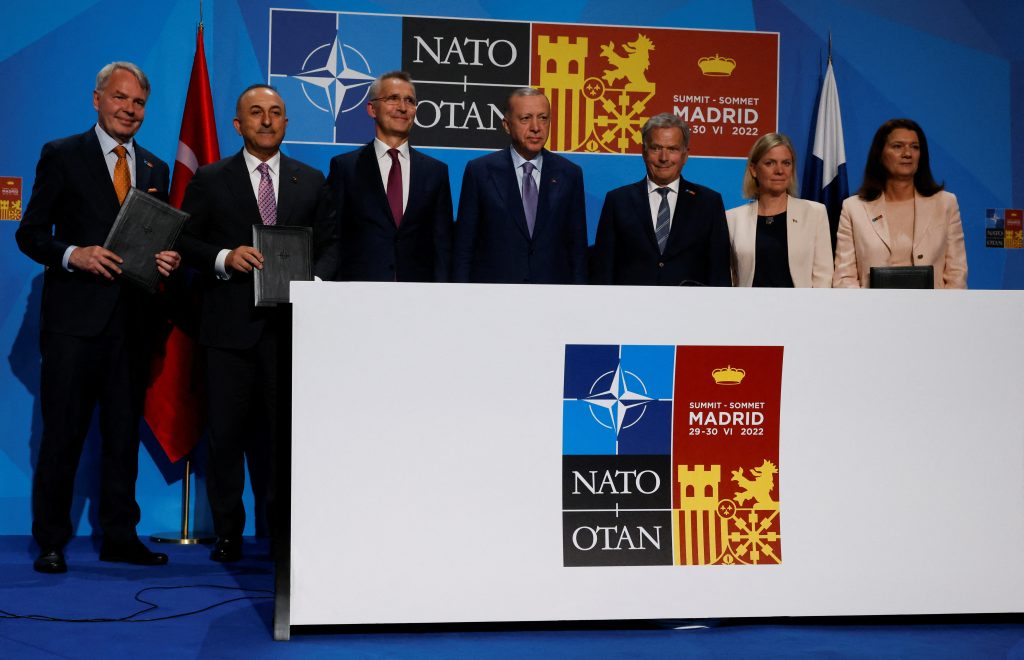 This week at their Madrid summit, NATO allies formally invited Finland and Sweden to join the Alliance. It was the latest step in a whirlwind process initiated by Russia’s invasion of Ukraine and delayed by Turkey—home to the second-largest military in the Alliance, after the United States—which argued that the Nordic countries did not sufficiently address Turkey’s national-security concerns. After weeks of tough negotiations, Turkey, Finland, and Sweden agreed to a breakthrough trilateral declaration on Tuesday.

Atlantic Council IN TURKEY asked experts for their take on the implications of the summit and the trilateral declaration.

Mehmet Fatih Ceylan: A victory for NATO unity and cohesion

A victory for NATO unity and cohesion

The ongoing Russian aggression in Ukraine since 2014 has entirely changed the security landscape, not only in the Euro-Atlantic area, but globally. It has fundamentally altered threat perceptions beyond the Alliance, leading Finland and Sweden to officially apply for membership in NATO. These two countries have indeed crossed the Rubicon and deserted their neutrality in response to persistent Russian belligerence in the middle of Europe. Their decision to combine their efforts and assets with the Alliance against Russian aggression is natural and legitimate. Hence the need to incorporate Finland and Sweden into the Alliance family.

The trilateral memorandum signed among Turkey, Finland, and Sweden on June 28 is a welcome development designed to demonstrate NATO’s solidarity and unity, and further strengthen the Alliance.

It is commonplace in NATO to consult on and negotiate over any dispute among allies and would-be allies to find a common ground. That is how NATO plays its role, and at the end a solution accommodating such concerns is found by consensus.

It is also true that once new members accede to NATO, they are bound by the decisions previously taken by the Alliance on a wide range of subjects. In NATO there exists a robust set of decisions and practices in fighting terrorism, beginning with the intervention in Afghanistan. Therefore, there is already an agreement comprising all sorts of conceptual work and practices in different geographical theaters on combatting terrorism, developed within NATO and binding on all members.

The newly adopted Strategic Concept (SC) clearly identifies Russia and “terrorism, in all its forms and manifestations” as the primary sources of threats in a 360-degree manner and across all three core tasks of NATO: collective deterrence and defense, crisis prevention and management, and cooperative security. Given that terrorism is “the most direct asymmetric threat to the security of our citizens and to international peace and prosperity,” as defined in the SC, it makes sense both for Finland and Sweden to cooperate with Turkey in combatting terrorism as one of the primary sources of threats against Alliance interests.

In a nutshell, collective deterrence and defense against actual and potential adversaries, nipping crises in the bud, and expanding the web of networks with partners under challenging circumstances are the main tasks of NATO in the next decade.

The main center of gravity for NATO is its solidarity, unity, and cohesion, including all allies and those set to become allies.

The summit decisions in their entirety will help NATO to navigate the troubled waters ahead over the long term.

—Mehmet Fatih Ceylan is the president of Ankara Policy Center and previously served as permanent representative of Turkey to NATO.

At their summit in Madrid, NATO leaders decided to “invite Finland and Sweden to become members of NATO, and agreed to sign the accession protocols.” This was an important breakthrough. Until now, Turkey’s President Recep Tayyip Erdogan had held up the protocols on the grounds that the two Nordic nations had embargoed his nation from defense sales and refused to extradite alleged Kurdish terrorists.

Consensus was facilitated by a meeting between US President Joe Biden and Erdogan—a bilateral long sought by the Turkish leader—and memorialized via a trilateral Turkey-Sweden-Finland memorandum in which the latter two agreed to lift the embargoes, condemn the Kurdish Workers’ Party (PKK) as a terrorist organization, “address” Turkey’s pending extradition requests, and support Turkey’s involvement in European Union defense initiatives.

The breakthrough underscored the influence and leadership of the United States in NATO. There is no way Erdogan would have lifted his veto solely due to European pressure.  It also reflects Erdogan’s recognition that NATO brings Turkey far more geopolitical value than Russia, which would savor seeing this Nordic bid for NATO membership fail.

Consensus on Finland and Sweden’s applications also demonstrated the Alliance’s unity in the face of Russia’s aggression and the difficulty Moscow still has when it comes to fully peeling Erdogan away from the transatlantic community. Once again, Putin’s strongest relationship in the Black Sea region has proven to be far more transactional than strategic.

With that said, Turkey, like all the other NATO allies, still has to ratify these accession protocols. There remains ample opportunity for Erdogan to introduce additional negotiations with the rest of NATO. I am optimistic that Sweden and Finland will become NATO members, but it is still too early to say this round of NATO enlargement is a done deal.

—Ian Brzezinski is a senior fellow at the Atlantic Council’s Scowcroft Center for Strategy and Security and previously served as US deputy assistant secretary of defense for Europe and NATO policy.

The summit brings Turkey’s security concerns to the fore

The summit was a great success for Ankara for three distinct reasons. The first is the content of the trilateral memorandum signed with Sweden and Finland: No arms embargo on Turkey, an affirmed commitment to address Turkish security concerns, no aid to the PKK or (significantly) the Kurdish People’s Defense Units (YPG), the Gulen movement mentioned as a terror concern, collaboration on the defense industry, working groups to follow—it’s hard to see what they missed. Of course, these are statements of principle, and execution or a final commitment will play out over time. But that is as true for Ankara approving accession as it is for the specified cooperation.

The second reason is the ringing endorsement from the White House not only for the trilateral memorandum, but for the strengthening of Turkish air power and specifically a commitment to press Congress to approve F-16 fighter jet sales and upgrades. Notably, Sen. Lindsey Graham (R-SC) has already weighed in with a strong endorsement of the deal. The in-person meeting of presidents Biden and Erdogan was notable, too.

The third reason is more subtle: the inclusion in the new, slimmed-down Strategic Concept of language on countering terrorism “in all its forms and manifestations.” This language, and the prominence given both terror concerns and the Russian military threat, address Turkish concerns and highlight the value Turkey adds to the Alliance.

—Rich Outzen is a geopolitical consultant and nonresident senior fellow at the Atlantic Council IN TURKEY with thirty-two years of US government service both in uniform and as a civilian.

Experts react: What does the Russia-Ukraine conflict mean for Turkey?

Putin’s invasion of Ukraine marks an inflection point in global affairs. Among the countries most affected, strategically, diplomatically and economically, is Turkey to the South across the Black Sea. We asked experts for their take on the Russia-Ukraine conflict and its implications for Turkey.