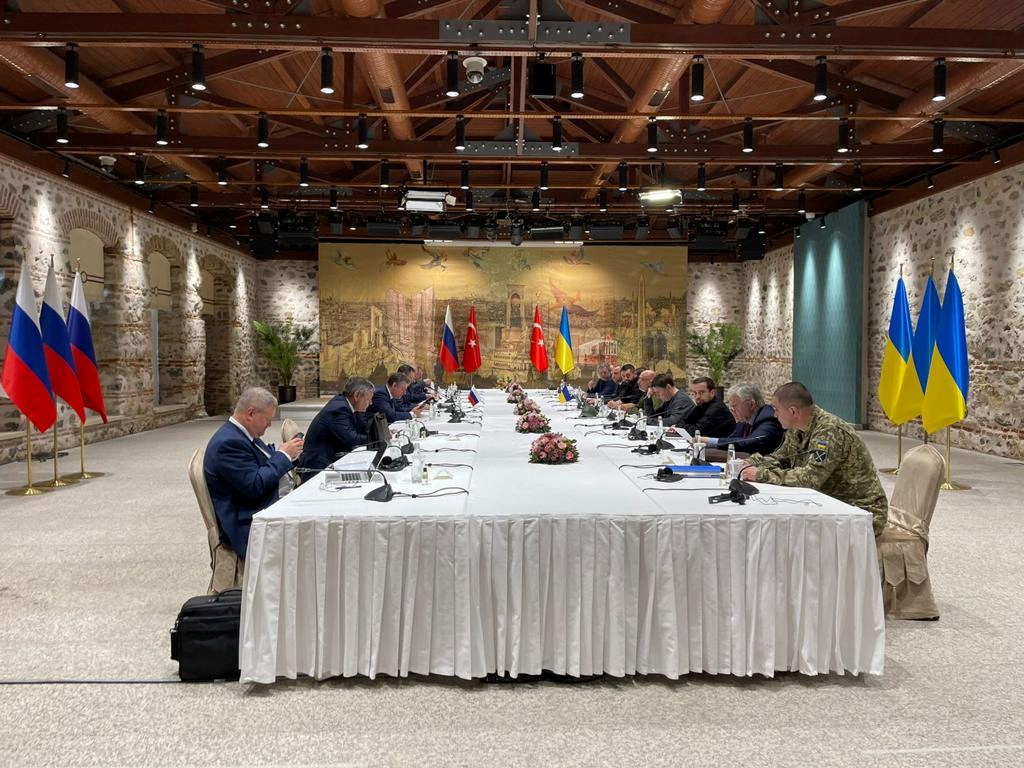 Ukraine’s resistance to Russia’s invasion has seemingly altered Russia’s war goals, creating space for diplomatic negotiations to advance. That was on display as negotiating teams from both countries huddled in Istanbul on March 29 for talks which, by all indications, were the most productive so far, and the two sides appeared closer to ending the war than before.

As the war in Ukraine has unfolded, Turkey has positioned itself as a mediator based on its ties with both Russia and Ukraine. Turkey heralded this week’s talks as a testament to it’s balanced approach and diplomatic efforts.

Atlantic Council IN TURKEY asked experts for their take on the latest round of talks in Istanbul, what it means for the war in Ukraine, and its implications for Turkey.

Defne Arslan: Why Turkey is “perfectly situated” to mediate

A “cautious optimism” for peace

Since the start of the Russian invasion in Ukraine, Turkey’s stand has been clear and consistent. Considering that the invasion is a blatant violation of international law and a heavy blow to peace and stability in the region, Turkey declared Russian aggression in Ukraine unacceptable and rejected it. Being a NATO ally, Turkey also took part in the decisions that the Alliance made in bolstering its deterrence and defense in the face of the unfolding crisis.

On the other hand, Turkey, having good relations with both Russia and Ukraine and cognizant of regional sensitivities, has been actively pursuing a diplomatic solution to bring an end to the conflict which, if not stopped, could lead to serious ramifications for the stability of the region and beyond. Turkey’s facilitation of the meeting between Ukrainian Foreign Minister Dmytro Kuleba and Russian Foreign Minister Sergei Lavrov, on the margins of the Antalya Diplomacy Forum on March 10, was an important first step to ensure that sides engage with each other at a high level and pave the way for settling the conflict. The recent round of negotiations in Istanbul this week, with Russia’s offer to fundamentally cut back its military operations around Kyiv and the northern city Chernihiv, sparked cautious optimism for a potential peace deal. Those who have been critical of Turkey’s engagement with Russia in the past—by questioning whether Turkey has been shifting its axis—should try to better understand the dynamics of the complex and, in most cases, compartmentalized “competitive cooperation” between the two countries; these critics should support Turkey’s diplomatic efforts. In any case, a diplomatic settlement would not only serve the interests of the international community but certainly those of Turkey, as it is economically strained and senses the security risks of a prolonged and expanded conflict on its borders in the Black Sea.

—Tacan İldem is a retired Turkish ambassador and former assistant secretary general of NATO. He is the chairman of the Centre for Economics and Foreign Policy Studies (EDAM).

Why Turkey is “perfectly situated” to mediate

Turkey’s efforts to continue to mediate are worthy of applause. Turkey is making the right move by giving full support to Ukraine. Turkey also has indispensable business relationships ( in trade, construction, and tourism) with Russia. So, Turkey is perfectly situated undertake this mediation. While noting this, Russia’s continued attacks playing down the peace talks give an impression that Russia is using the peace talks in Turkey as a showcase. And yesterday, Russian President Vladimir Putin’s demand that buyers of Russian gas open accounts in Russian banks indicated to me that he will not give up unless he is assured that sanctions will be removed.

—Defne Arslan is the senior director of the Atlantic Council IN TURKEY Program and the Council’s regional representative with a specific focus on Turkey.

There’s still time for the talks to become significant

The talks in Istanbul are interesting but not significant—yet. There is only one decisionmaker in Russia: Putin. And he thus far has neither endorsed the peace talks nor said anything suggesting that he has changed his maximalist objectives in Ukraine. The same is true of the talks weeks ago between Kuleba and Lavrov.

We know that Putin has failed in his original war goals—to seize Kyiv and topple the Zelenskyy government. And the Russian offensive more broadly has failed, as it has only managed to seize the two cities Berdyansk and Kherson. We know too that only lesser Russian figures have suggested more limited war aims: the negotiators, defense officials, and senior soldiers.

The negotiations and the statements of new, more limited war aims give Putin some flexibility as he ponders his current predicament; but they commit him to nothing. If he decides that he cannot achieve the domination of Ukraine that he seeks, these developments may be indicators of changes in future Russian policy—and the negotiations may become significant. Alternatively, these developments may simply buy Putin some time to double down on his original intent.

—John Herbst is the senior director of the Council’s Eurasia Center and a former US ambassador to Ukraine.

The round of negotiations in Istanbul is a step forward in the right direction. Though it is hard to tell how much progress the two delegations made, there are positive signs coming from Moscow. Russia’s chief negotiator Vladimir Medinsky and Lavrov reacted positively as Kyiv agreed to drop its aspirations to join NATO and settle for a neutral status. That, of course, is no real concession. NATO accession was never in the cards, and it was only the Kremlin’s own propaganda that gave it prominence, largely as a pretext for invading Ukraine. Remarkably, Medinsky spoke positively of Kyiv’s consent to renounce nuclear weapons—another fine example of non-concessionary concession. Such statements indicate that Russia is looking for excuses to brand its “special operation” a success, despite the plentiful evidence to the contrary. In the best-case scenario, this rhetorical ploy creates a pretext for a scale-down of Russia’s military campaign—in line with its Defense Ministry’s statement that they will be turning the heat down on Kyiv and Chernihiv.

To be sure, there is a less benign interpretation. Russia could be playing hot and cold to gain time, regroup, and resupply its forces before mounting a fresh offensive. A parallel with Syria is pertinent. There, Putin made “mission accomplished” announcements on several occasions—only to authorize new campaigns against the Assad regime’s opponents. We are not yet at a point that the war would turn into a “frozen conflict,” much less a durable political settlement.

A deal will have to address Crimea as well as the separatist republics in the Donbas. Lavrov is now saying the gap between Russia and Ukraine on those issues is getting narrower. But we don’t know that for sure. It will take many more rounds of negotiations to forge a compromise. And the fighting is sure to continue in the meantime.

This has implications for Turkey. President Recep Tayyip Erdoğan has scored symbolic points with the talks in Istanbul, following the meeting between Lavrov and Kuleba earlier in March. But reaching a political deal will be a hard slog. Working out a compromise on the territorial disputes will be an even more daunting task. To make a substantive difference, Turkey will have to redouble efforts and show diplomatic creativity. And it will need to work with the rest of NATO and with the European Union in order to reassure Ukraine and provide guarantees. That is not an easy feat by any measure.

—Dimitar Bechev is a nonresident senior fellow with the Atlantic Council’s Europe Center. He is also a research fellow at the Center of Slavic, Eurasian, and East European Studies at the University of North Carolina at Chapel Hill and the director of the European Policy Institute, a think-tank based in Sofia, Bulgaria.

How Moscow used the negotiations

It appears that the negotiations in Istanbul may have been used by Moscow to get a respite and regroup. While Russia (and Ukraine) suffered great losses in a high-intensity conflict, there is little to suggest that Russian society understands the extent of the failure of Moscow’s war aims. Reportedly, oligarch Roman Abramovich delivered Putin a handwritten note from Ukrainian President Volodymyr Zelenskyy outlining an end to the war, and Putin reacted by saying, “tell him I will trash them.” Putin appears to be willing to continue the war as Russia has more resources than Ukraine. The “hawks” like the Chechen strongman Ramzan Kadyrov appear to articulate the real Russian position.

Moreover, Ukraine already offered neutrality, which would prevent it from joining military alliances like NATO, but Kyiv cannot just capitulate after over a month of warfare, massive casualties, and destruction. Zelenskyy, a democratically elected leader, cannot accept Putin’s terms. He cannot cede Crimea and the Donbas region to Russia so easily. He cannot agree to a settlement without Western security guarantees.

Turkey has many reasons to offer to settle the conflict to its north, including that the war is corrosive to Turkey’s relationship with Russia, has already inflicted a massive economic price, and, if Russia emerges victorious, will threaten Turkey’s national security. But the negotiations are still covered in the fog of war and appear gloomy.

—Ariel Cohen is a nonresident senior fellow with the Atlantic Council’s Eurasia Center and program director and senior fellow of the International Tax and Investment Center.

The Atlantic Council IN TURKEY discusses Turkey’s importance for Ukraine, Turkey’s stance towards the war between Russia and Ukraine and its efforts towards mediation with Yevgeniya Gaber.