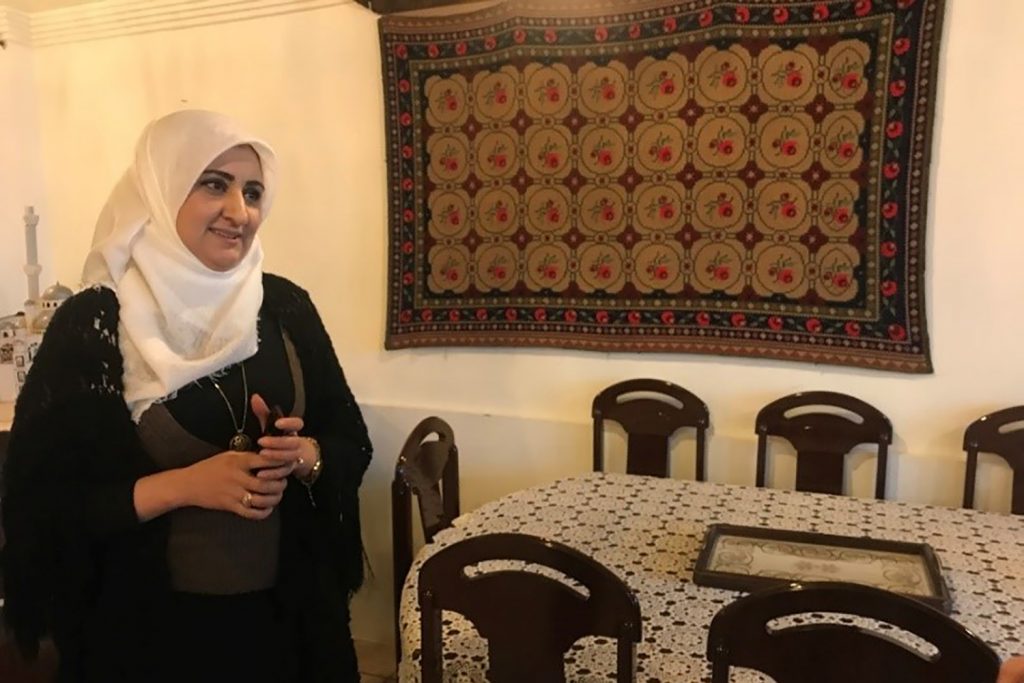 Lobna Helli (forty-one) is one of 3.7 million Syrian refugees (officially: Syrians Under Temporary Protection) and one of the 1.6 million Syrian women living in Turkey. She is among the many Syrians making a difference in their host communities.

Lobna, who had to temporarily close her chocolate house-restaurant called Lazord, had the idea to launch an initiative to help people in Gaziantep who have lost their jobs due to the COVID-19 pandemic. Using Facebook, she formed a ten-person team consisting mostly of women and started a movement called “Our humanity brings us together.” They facilitate connections between Syrian and Turkish families who either want to offer financial support or need financial help. With the funds they collect, they buy grocery cards worth one hundred Turkish lira and distribute them to those in need. They have reached more than one hundred families, so far.

Lobna is among a small number of Syrian women entrepreneurs in Turkey. 2.1 million of the 3.7 million Syrians under temporary protection in Turkey are of working age and, since January 2016, Syrian refugees are entitled to apply for a work permit. Syrian women have access to the labor market but the number of working Syrian women is very low. Therefore, they are actually not unemployed but inactive, meaning that they are not looking to work. According to a December 2018 official report, out of 929,062 Syrian women of working age (fifteen to sixty-four) only 99,967 are working. However, this number doesn’t include the eight hundred thousand Syrian men and women working informally. Around ten thousand to fifteen thousand Syrian businesses are operating in Turkey. According to the United Nations Development Programme Mapping of Syrians businesses, out of three hundred Syrian entrepreneurs, ten are women. Because of low participation of Syrian women in the labor market, only 911,106 of total Syrians are actively participating in the labor force.

To some, Lobna is an insignificant statistic, but that denies her human experience and contributions to the Turkish community. Though she may be among a small minority, it is worth lending an ear to Lobna’s story to understand the value and entrepreneurial spirit that immigrants possess, especially, as women.

After the outbreak of the war in Syria, Lobna fled from Aleppo—one of the towns closest to the Turkish border—and took refuge in Turkey in 2015.

“We had a very nice life in Aleppo. My husband and I, we had nice jobs and a happy family. I was working for a company as a human resources expert. Our girls were going to school. We were going out on weekends to see our family, our friends, people we love. Like everyone else. A happy and ordinary life…. until the war broke out. With the war, our whole life suddenly changed so much [in a way] that we could not have predicted. Everything was turned upside down. We lost everything we had. We did not want to leave our country until the last moment. We always waited for this to end. But that day never came. Everything just got worse. My husband was imprisoned and tortured for being against the Assad regime. Finally, we had to flee to save our lives.”

Lobna took refuge in Gaziantep with her two daughters, and mother. As the city was close to Aleppo, they thought settling there would make it easier for them to return one day. They preferred to live in Turkey as they felt culturally closer to the country and because it was recommended by people who previously found refuge there. Her husband could join them only two years later as he was in prison.

Lobna left everything behind. Her grandmother’s lace tablecloth was one of the few things she could bring with her: “We left with the hope of returning back one day, but I wanted to have something of my past with me in case we could not return. To never forget our roots, where we came from.”

She started everything from scratch, entering a new country and a new city to learn a new language. She had to survive as a mother and a woman: “When we first came to Turkey from Syria, I worked as a volunteer in charities to help people like us. After a while, I started to think about what we can do to make money as my daughters started school. We had built a life here and life was going on”.

Gaziantep is one of the cities that is known for its gastronomy and dessert culture. Lobna Helli also decided to open a dessert shop but needed to be unique to be a successful entrepreneur: “The best way to forget our pain is to make others happy. The way to do this is through eating and dessert. I wanted to open a dessert shop, but I had to do something different because there are amazing restaurants and dessert shops in Gaziantep. I thought, what could I do differently? I researched and, finally, saw that there was no chocolate among so many desserts. And I opened a chocolate house. I added innovations such as chocolate döner [and] chocolate pizza. Everyone loved it—it attracted a lot of attention. After a while, I decided to expand the business and open a restaurant, not only for chocolate, but for Syrian food. But I had no capital. I convinced my mother, my sister, and women around me to invest. We sold all [the] gold we had and opened a restaurant. Now, we serve as a restaurant and a place where special events and gatherings are celebrated.”

Lazord Chocolate House is in one of the busiest places in Gaziantep. It is one of the most favored restaurants for Syrians and locals from Gaziantep.

In addition to her mother and husband, Lobna employs three more people in Lazord Chocolate House and restaurant. They cook the finest dishes and appetizers of Syrian cuisine; from hummus to muhamma to kibeh. Her dream is to transform Lazord into a world cuisine restaurant.

Lobna’s story shows how refugees bring with them their knowledge, creativity, and goodwill, which they share with their host communities during both good and bad times.

*Lobna Helli is one of the fifteen Syrian women entrepreneurs interviewed in Gaziantep in the context of the Atlantic Council’s IN TURKEY’s upcoming documentary on Syrian Women Entrepreneurs in Turkey. It was realized with the support Limak Holding and produced by the 451 Derece production company.

An interview in Arabic with Lobna Helli at her store:

Our Humanity Brings Us Together COVID-19 raising awareness ad

Image: Lobna stands in the Lazord Chocolate House, one of the busiest places in Gaziantep. It is decorated with traditional pieces she brought from Aleppo.