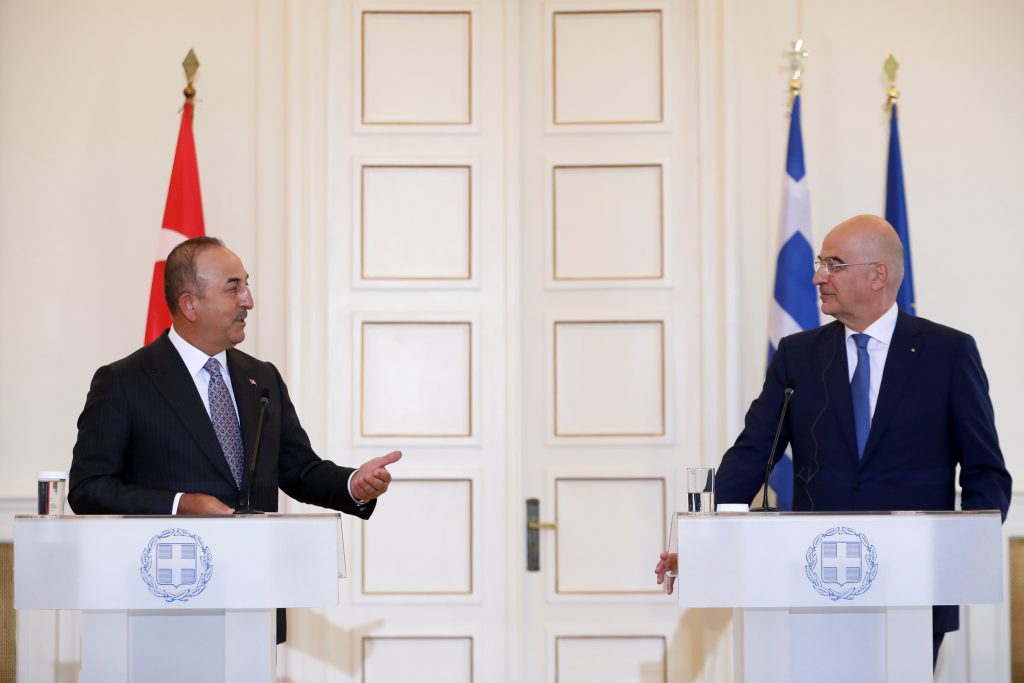 Geopolitics in the Eastern Mediterranean (East Med) are heating up again after maritime claims and quests for offshore energy resources escalated last month. But the windfall probably won’t be worth the diplomatic trouble—even if the tensions don’t abate anytime soon.

The island of Cyprus has been divided since 1974, when Greece attempted a coup in Nicosia to annex the island and was met with Turkish intervention in the north. Today, the two communities remain separated by a United Nations (UN) peacekeeping force on the “green line,” with no long-term solution in sight. The discovery of hydrocarbons in Cypriot offshore fields has only exacerbated tensions throughout the region by pulling international actors into the dispute. Although there has been much hype about the monetization of gas deposits around Cyprus, the window of opportunity is closing fast—if it’s not already sealed. Project proposals that leave Turkey and Turkish Cypriots out are unlikely to achieve expected benefits, mainly due to political, market, and financial risks in a rapidly changing energy landscape.

On December 10, the Republic of Cyprus (ROC) granted the consortium of Qatar Energy-ExxonMobil (QE-EM) an exploration license for oil and gas drilling in marine Block 5, located off the southwest side of the de facto divided island. The ROC—which has effective control of the southern two-thirds of the island, consisting mostly of the Greek Cypriot community—had passed a law in 2004 defining and regulating its exclusive economic zone (EEZ), in which thirteen sub-zones, or “blocks,” can be auctioned for concession agreements to energy companies. QE-EM already possesses licenses to operate Block 10, where the group discovered a mid-size gas reservoir at the Glaucus-1 well in 2019, raising the prospects of joint off-shore gas development, extraction, and monetization.

Meanwhile, tensions in the region have been high since 2011, when the Noble Energy-Delek-Shell consortium initiated exploratory drilling in the Aphrodite well of Block 12—prompting Turkey to respond in kind by conducting seismic research and sending naval escorts on behalf of the Turkish Cypriot community in the north. The existing standoff over energy rights exacerbated the island’s political conflict and turned it into a multilateral issue with many moving dimensions. Not only do Turkish Cypriots claim equal rights to the island’s resources, but the Greek Cypriot EEZ overlaps the area Turkey claims as its own EEZ in five of the thirteen offshore research blocks to the west and southwest of the island.

As the coronavirus-induced economic downturn loses momentum, international oil companies are back on the scene to reassess productive assets in their portfolios and prioritize the most profitable ones. Many producers, including Exxon, made drastic cuts in their budgets to bear the headwinds of reduced demand amid the shock in 2020. Experts say the global energy transition to renewables means scarcer capital in the long term and risky projects in the East Med.

For one, the European Union (EU) has no appetite for greenfield projects such as the much-debated East Med natural gas pipeline, and the QE-EM consortium’s recent move should be viewed through this lens. The Biden administration reportedly expressed reservations to Athens regarding “issues of [the pipeline’s] economic viability and environmental [impact].” This is unsurprising, since US Ambassador to Greece Geoffrey R. Pyatt highlighted at a web conference by the Center for European Policy Analysis in 2021 that “it’s important to recognize how quickly the ground is shifting underneath some of these traditional disagreements over things like gas and oil resources on the sea floor. Many of those resources will never be extracted in the current economic and investment environment… More attention should be given to how that changing energy conversation also promises to shift the geopolitics.” The United States also wants to sell its own liquefied natural gas as a transition fuel to the region and has less interest in sponsoring a competing pipeline project. In the interest of moving on high-return, quick-turnaround projects, the QE-EM partners started an appraisal drilling in the Glaucus-1 field inside Block 10 as a priority to gain a clearer picture of the reservoir’s resource potential—and only then move to Block 5 if there’s promise. Early results from the drill in Block 10 are expected toward the end of the first quarter of this year.

The challenge is that Turkey’s continental shelf, as it declared to the UN in 2020, overlaps with roughly 40 percent of Block 5. One expert notes that the disputed area “has less hydrocarbon-presence potential, so ExxonMobil is unlikely to venture that far.” Indeed, Turkey’s exploratory drills in the East Med have yet to bear positive results despite trial runs in multiple locations around Cyprus. Instead, it has focused its attention on the Black Sea since 2019, while its quest to tap into offshore energy deposits in the East Med turned out to be more about geopolitical posturing, desire for status, and national prestige than economic rationality.

In this context, the lack of Turkey’s typically high-profile reaction to Greek Cypriot brinkmanship is noteworthy. It appears that, contrary to popular conviction, Ankara is no longer interested in taking a confrontational approach purely for offshore energy rights in disputed zones around Cyprus. With a bleak future for hydrocarbons in the energy mix, as well as high costs against a looming potential supply glut by 2024-25, other experts go even further to suggest that frictions over East Med oil and gas are an “outdated discussion.”

Energy markets aside and facing a severe economic crisis amid a tumbling lira, Turkish officials are scrambling to mend ties with friends and foes alike, from Qatar and the United Arab Emirates to Israel and Saudi Arabia. “Turkey agreed to [the QE-EM license] in the hope that Qatar can help push for a rapprochement with Egypt,” one analyst told Al-Monitor last month. In 2020, Egypt and Greece inked an agreement to establish a joint EEZ for East Med resource exploration, which clashed with claims made by Turkey and the Tripoli-based Government of National Accord in Libya in their own 2019 EEZ agreement. Ankara needs Cairo’s support to end its regional isolation, establish the remaining parts of its EEZ in the East Med (left over from only a partial demarcation with Libya in 2019), and maybe even overturn the 2020 Greek agreement with a much more advantageous package deal with Cairo.

This doesn’t mean that Ankara has taken a hands-off approach toward the East Med, or, as the Greek side would hope, that it has dropped its assertive maritime policy of “blue homeland.” The basic essence of the concept remains the same, and instead of an on-and-off approach, there are gradations of this strategy. The Turkish government employs strategic ambiguity at times to soften its tone, take a conciliatory approach, make symbolic gestures, and engage in exploratory talks to alleviate Western criticism of its assertive foreign policy—while continuing to seek alternative means to achieve its geopolitical goals. A senior Turkish diplomatic source in Ankara, who requested anonymity to speak about contentious issues, highlighted that “Turkey will not allow any unauthorized hydrocarbon and drilling operation of third countries in its continental shelf and will continue to protect its rights as well as equal rights of the Turkish Cypriots over off-shore resources of the island.”

In any case, it’s unlikely that QE-EM will operate in the parts of Block 5 overlapping the Turkish continental shelf, since Turkish Foreign Minister Mevlüt Çavuşoğlu recently said “the United States and Qatar have guaranteed that they will not enter our continental shelf.” If they do, the Turkish source in Ankara added, “Turkish Cypriots will re-commence their off-shore survey and drilling activities in license blocks that they granted to Turkish Petroleum (TPAO) in 2011.” These exploration zones on the island’s south, east, and north overlap with ten blocks in the Greek Cypriot EEZ. TPAO has conducted several seismic surveys and drills in the designated area since 2017, but briefly paused activities as it shifted focus to more promising fields in the Black Sea. The source also reiterated Turkey’s support for a “cooperation mechanism” between Turkish Cypriots and Greek Cypriots on oil and gas exploration, and “an inclusive East Med Conference” on these issues.

The ROC government often leverages the EU and the United States to balance Turkey’s presence in the region, and it may have hoped that the US Navy’s Sixth Fleet would come to its assistance if the Turkish navy intervenes in Block 5. But the likelihood of such a confrontation is very low—if not zero. Despite all the talk of oil and gas licensing around Cyprus, there’s nothing new when it comes to geopolitical arm-wrestling in the East Med.

Serhat S. Cubukcuoglu is a doctoral candidate at the Johns Hopkins University School of Advanced International Studies (SAIS) in Washington, DC. Follow him on Twitter at @suhac.