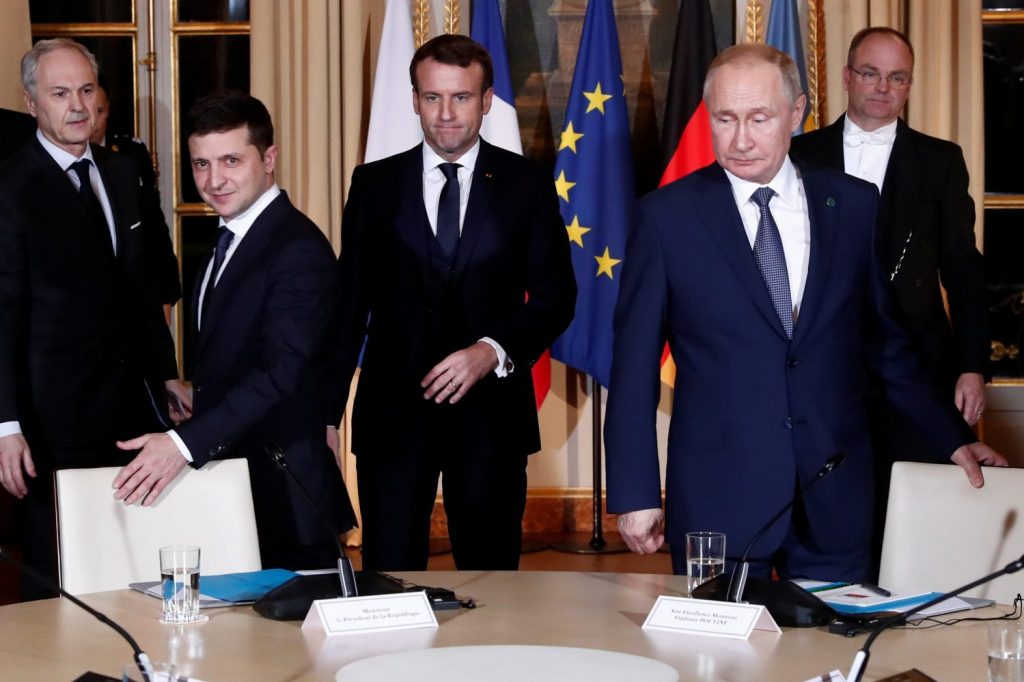 The International Crisis Group (ICG) issued a report on April 28 designed to promote a negotiated settlement to Moscow’s war on Ukraine. The ICG has a well-deserved reputation for its efforts to advance peaceful solutions to conflicts worldwide, so its focus on the Donbas is serious and deserves scrutiny.

The ICG report correctly insists that the conflict cannot be resolved by Ukraine and Russia, and posits that Russian unhappiness about the post-Cold War security order must be addressed. Most interestingly, it proposes some steps to build momentum—including the idea of partial lifting of Western sanctions in exchange for partial Russian implementation of the Minsk Agreements.

If this proposal had come from a Moscow think tank, it would be intriguing. If it came from the Russian Foreign Ministry, or the Kremlin, it would be cause for optimism. It would be an indicator that Moscow was coming to understand the need to end its aggression in Ukraine. But coming from a well-regarded Western think tank it serves very different Kremlin motives, and that is perhaps to the paper’s biggest oversight, which is its reluctance to subject Russian motivation to analysis.

Instead, the report describes a “Russian consensus” that sees the West as threatening Russia and interpreting every move by countries on its periphery to improve relations with NATO, the EU, or the United States as part of Western encroachment. So, the Maidan Revolution and the flight of former Ukrainian President Yanukovych is seen by the Russian consensus as a US project, rather than actions driven by Ukrainians. For the Russian consensus, this means the seizure of Crimea and the launch of a not-so-covert war in the Donbas is “defensive.”

This is the same picture that the Kremlin and its auxiliaries present to outsiders, but it is not the whole picture. Since 1991, Kremlin policy has been designed to ensure a sphere of influence that limits not only the foreign policy of its neighbors but also their domestic policy. This approach is also part of a broader policy to weaken the West’s key institutions.

The “Russian consensus” is actually the consensus of the Russian security apparatus—the vaunted siloviki—who have been running Russia since KGB Lieutenant Colonel Putin became president in 1999. And even during Boris Yeltsin’s Presidency in the 1990s, the security agencies were running Russian policy in the Near Abroad. With this policy, Moscow exerts leverage on its neighbors by providing support for minority separatist projects. Moscow has been doing this in Georgia, Moldova, and Azerbaijan, and its efforts began well before talk of NATO enlargement. Moscow’s seizure of Crimea and its war in the Donbas are simply the latest and most egregious examples of its frozen conflict policy.

The ICG report notes Moscow’s unhappiness with the post-Cold War security structure in Europe but does not explain what Moscow considers objectionable. That order has been based on two documents that Moscow signed, the Helsinki Final Act of 1975 and the Paris Charter of 1990. Those documents state plainly that relations between states should be based on the principles of self- determination, territorial integrity, the right of each state to determine its own political and economic systems, and to choose its own allies and trading partners, and the unacceptability of resolving international disputes by coercion and war. Moscow’s frozen conflict policy tries to prevent countries in its neighborhood from enjoying these basic rights.

Contrary to Moscow’s talking points, the admission of new members to NATO and the EU was driven by the choice of the newly sovereign states to seek security and prosperity by joining these institutions. And it would be naïve to ignore that Moscow’s heavy-handed policies spurred the Baltic states and others to seek NATO membership.

Why is it necessary to raise this? Because these facts help us understand what may work to bring a just peace to the Donbas, a peace consistent with the sovereignty, security, and territorial integrity of all parties, but especially the victim Ukraine. Without proper analysis, it is impossible to propose the right solutions.

To entice Moscow to make peace in the Donbas, the ICG report proposes a step-by-step lift of sanctions and a dialogue on European security. This proposal was first broached by the German Foreign Ministry years back. The ICG report’s rationale is that it might help persuade Kremlin policymakers that the West is ready for peace on terms acceptable to the “Russia consensus.”

Within the framework of the report’s analysis, this seems like a reasonable risk to take. But if you broaden the picture, and look at the Kremlin’s frozen conflicts policy, the reality looks very different. French President Sarkozy helped negotiate a ceasefire to the war Moscow provoked with Georgia in 2008. While there was a momentary strain in relations with Russia, the West imposed no sanctions or other penalties on Moscow. Less than a year later, the Obama administration “reset” relations with Russia. Moscow has not observed the terms of the ceasefire and  its “borderization” policy continues to push the internal demarcation line between South Ossetia and Georgia a few meters further into Georgia every year. In other words, a soft Western response to Kremlin aggression failed. With the Georgian example in mind, Moscow saw little downside to seizing Crimea and launching its war in the Donbas.

The clear lesson is that concessions, or at least premature concessions, are not going to promote peace in eastern Ukraine. Moscow is conducting military operations in the Donbas to force Kyiv to give up its plans for greater economic and political cooperation with the West. This whole crisis began when Moscow objected to a trade agreement between Ukraine and the European Union. Moscow has gotten bogged down in the Donbas because the Ukrainians fought back successfully, the Russian people do not want their sons fighting in Ukraine, Western sanctions hurt the Russian economy and Western weapons—specifically Javelin missiles—have raised the prospect of greater Russian casualties.

The sanctions have been a critical factor deterring Kremlin escalation. According to the International Monetary Fund, they have cost Moscow 1 to 1.5 percent of GDP per year; and this helps us understand why Moscow has been working diligently, but unsuccessfully, to lift them. The Kremlin keeps hoping that it can at least persuade the West to ease sanctions. That is why it is not helpful to propose even a back-loaded step-by-step sanctions lift. Moscow has not implemented the most basic element of the Minsk Agreements—which is an actual ceasefire. Every day since the first Minsk Agreement was signed in September 2014 there has been multiple exchanges of fire.

The sanctions must remain until the Kremlin’s war ends. And no good will come from discussing even a partial lift until it becomes clear that Moscow wants out of its failing adventure. With such clear signals, talk may also include the security architecture of Europe. But any such discussion must be within the framework of the Helsinki Final Act and the Charter of Paris, recognizing the sovereignty and territorial integrity of all nations on the continent.

The ICG report is right to talk about the importance of outreach to those in the occupied Donbas. But that outreach should not occur through or with the ostensible leaders of the Luhansk and Donetsk Peoples’ Republics. They are instruments of Moscow, not independent players, and some of them have been Russian political operatives and military officers. The time will come when Moscow decides to cease its aggression in eastern Ukraine. Perhaps the current pandemic and the precipitous drop in oil and gas prices will bring that day closer, but until then, reducing the pressure on the Kremlin would be a serious mistake.