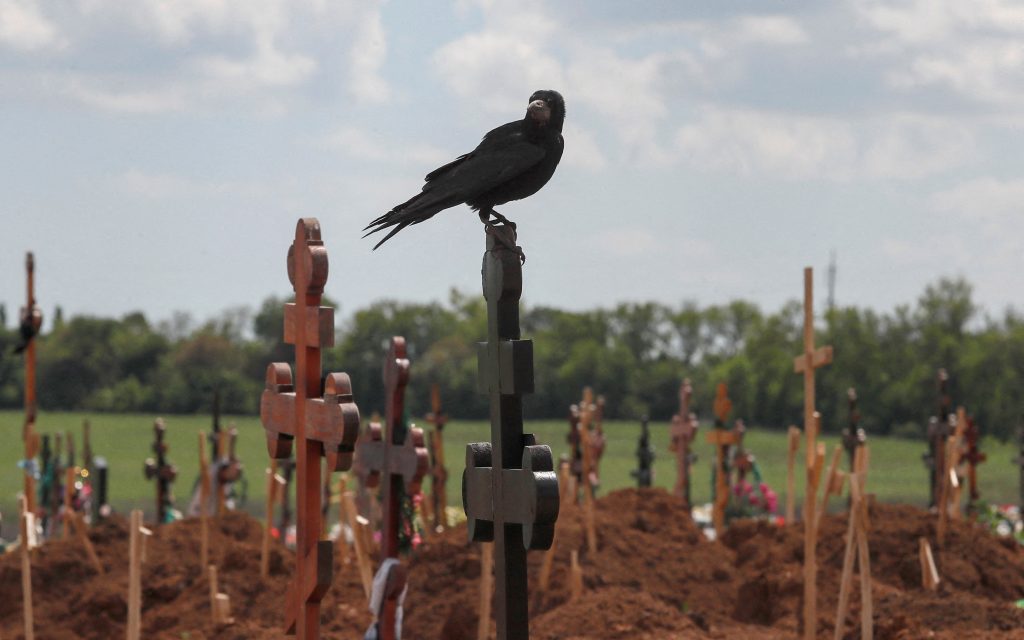 As Vladimir Putin’s Ukraine War reaches the three-month mark, it is clear that things are not going according to the Kremlin plan. Ukrainian troops have forced Russia to retreat entirely from the north of the country and are now advancing in the east around Kharkiv. With the first wave of Western heavy weapons deliveries beginning to arrive on the battlefield, Kyiv has voiced its intention to liberate the whole of Ukraine including Crimea and the eastern regions occupied since 2014.

Ukraine’s military success has won global admiration but has also sparked alarm among some Western leaders and commentators. French President Emmanuel Macron is the most prominent of the many voices now warning against driving Putin into a corner. Instead, Macron advises leaving the Russian leader an off-ramp.

The off-ramp envisioned by Macron would likely involve a ceasefire enabling Russia to retain at least some of the territorial gains it has made since the invasion began on February 24. Aside from the dubious morality of having their lands traded for peace, Ukrainian officials believe that any such deal would only postpone another round of aggression until Russia rebuilds its forces.

The French leader is far from alone in advocating appeasement. Indeed, Macron’s German and Italian counterparts have also indicated support for similar positions in recent weeks, while a May 19 op-ed by the New York Times editorial board was the latest in a series of high-profile articles in the international media calling for Ukraine to cede territory in exchange for an end to the fighting. These arguments in favor of appeasement are typically framed as foreign policy realism, but in fact they have little in common with Putin’s version of reality and underline the failure of many in the West to understand the true nature of modern Russia.

Advocates of appeasement often echo the belief that Russian foreign policy is a defensive response to the post-1991 expansion of the NATO alliance into Moscow’s traditional sphere of influence. They appear unaware of the far deeper historical context underpinning the Russian invasion and ignore the fact that imperial Russia had been oppressing Ukraine and other neighbors for centuries before NATO existed. These imperial instincts remained intact throughout the Soviet period and have thrived once more in Putin’s Russia. In other words, the Kremlin’s current aggression fits a culturally well-embedded script that has little to do with the actions of the West.

A related and equally important misunderstanding is the failure to realize that imperialism is necessarily based on racist premises. Russians traditionally categorize Ukrainians either as “Little Russian” loyalists, sly but amusing bumpkins, or irredeemable fascists. Each category is racist in its own right, reflecting the traditional Russian desire to deny Ukrainians agency and identity while also dehumanizing those who are viewed as hostile to Russian rule.

Most Russians simply refuse to recognize that modern Ukrainian society has little in common with the Kremlin’s crude stereotypes and is instead characterized by political secularism and European values. This was the great miscalculation of the Kremlin’s invasion and a key reason for Russia’s military setbacks. Putin appears to have sincerely believed his soldiers would be welcomed with flowers by large portions of a divided Ukraine. Instead, Ukrainians united against him. While Russia’s racism is based on false premises, it cannot be dismissed as it shapes the regime’s behavior.

Arguments in favor of compromise ignore the considerable capacity of Russia’s state bureaucracy for mobilizing hatred. This was put on display in Ukraine by the widespread and militarily superfluous atrocities committed by the Russian army in its areas of occupation and by the persistent terror bombing of residential areas in eastern Ukrainian cities which, incidentally, have large ethnic Russian populations.

Such conduct is the most persuasive argument in favor of Ukraine’s NATO membership aspirations and against appeasement. Countries such as Poland, the Czech Republic and the Baltic states, which are all infinitely more acquainted with traditional Kremlin practices than Macron and other members of the appeasement camp, were not taken over against their will by an expansionist NATO. On the contrary, they themselves did everything possible to secure membership.

Talk of appeasing Putin has two unintended but harmful effects on Russia. First, such appeals are enthusiastically echoed by the Kremlin propaganda apparatus to legitimize its victimization narrative, which helps Russians to avoid a self-examination of their dysfunctional notions.

It also forecloses a productive relationship with Russia’s neighbors. In this context it is worth noting the lesson provided by Poland, which historically held parts of Ukraine in situations that produced periodic violence by both sides. Modern Polish politicians and academics are intellectually mature enough to avoid demonizing Ukrainians and to admit that Poles were responsible for their share of the violence. Poles and Ukrainians engage in an honest dialogue and have agreed on the formula “to forgive and ask for forgiveness.” As a consequence, the two countries are now good friends and close allies. In contrast, most Russians would angrily reject the entire proposition of asking Ukrainians for forgiveness.

In the meantime, Russia and neighboring countries needlessly forego the economic benefits that could have come from better relations. The Kremlin could have achieved mutually advantageous trade that would have allowed Russia to continue using Ukrainian gas pipelines to Europe, and Russia’s citizens could have been spared the high cost of bypass pipelines to Europe and the unprofitable Power of Siberia to China. Instead, Russians remain mired in the repressive governance and economic stagnation that are the trademarks of the Putin regime.

Regardless of how the war plays out in Ukraine, Russia is likely to emerge as the biggest loser. Its institutions have been exposed as corrupt and its army is now widely regarded as inept.

The Chinese will be the first to notice this weakness and will call in the financial and political debts that Russia has accumulated. Chinese firms will obtain equity in sanctions-weakened Russian companies. This will accelerate Russia’s transformation into a de-industrialized resource appendage locked to authoritarian China with poor prospects for future democratization.

If Russia retains control over Ukrainian territories, the Kremlin will have to maintain a strong repressive apparatus not only in Occupied Ukraine but also in Russia itself in order to ensure resistance does not spread. Liberalization will be indefinitely foreclosed, to the detriment of ordinary Russians.

At a fundamental level, the Russian public needs to be cured of nostalgia for former imperial possessions like Ukraine before there can be any hope of a lasting peace in the region. However, Western entertainment of the Kremlin’s victimization narrative merely postpones this process.

Through their complicity in Putin’s political course, Macron and other appeasers misjudge the underlying reasons for this course and play a secondary but significant role in Russia’s continued decline. Appeasement is obviously bad for Ukraine but it is also disastrous for Russia itself.

Image: A bird sits on a cross amid fresh graves at a cemetery in the settlement of Staryi Krym outside Mariupol. May 15, 2022. (REUTERS/Alexander Ermochenko)