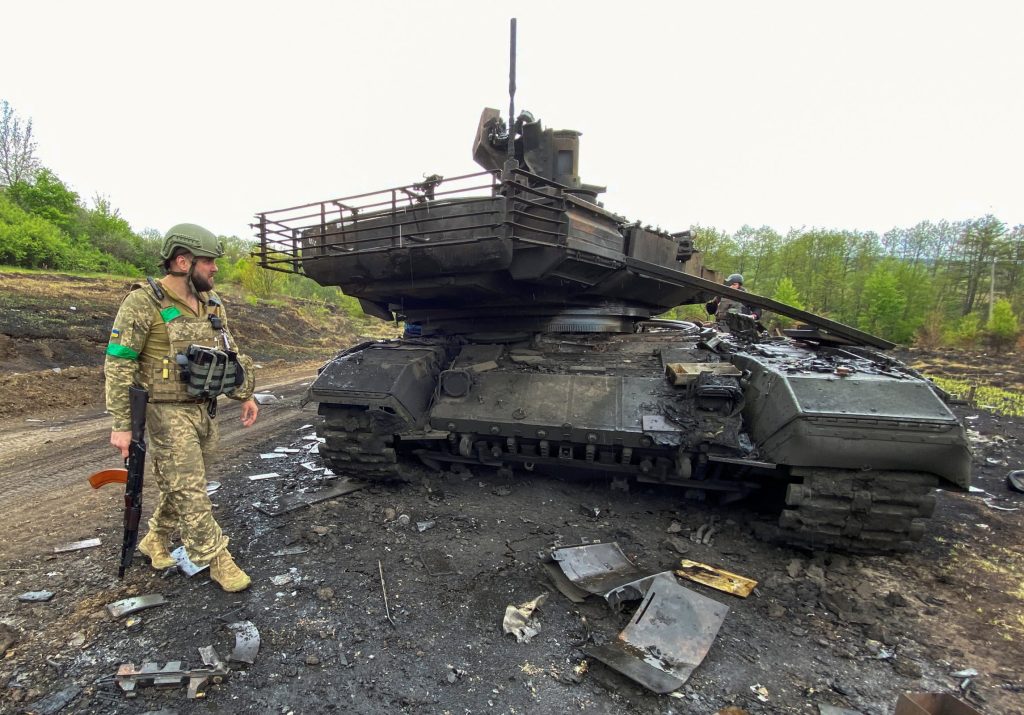 When Vladimir Putin launched the invasion of Ukraine on February 24, he envisaged a lightning campaign that would be over in a matter of days with Ukraine’s pro-Western government deposed and the country firmly back in the Russian orbit. However, things have not gone according to plan. The Russian military has suffered catastrophic losses and failed to achieve its key objectives, while Ukraine has fought tenaciously and secured the support of the entire democratic world. As the war approaches the three-month mark, Putin is now rapidly running out of options to avoid a disastrous defeat that will shatter Russia’s pretensions to military superpower status and threaten the future of his entire regime.

According to British estimates, Russia has already lost approximately one-third of the 190,000-strong invasion force assembled in February 2022. Putin chose to invade with this obviously inadequate force due to a combination of faulty intelligence and his own faith in Russian nationalist dogma, which convinced him that the Ukrainian public would greet advancing Russian soldiers as liberators and shower them with flowers.

Instead, his troops received an overwhelmingly hostile reception and were soon reporting severe battlefield losses. Amid mounting setbacks, Russia lost the Battle for Kyiv and was forced to retreat entirely from northern Ukraine. More recently, Russian forces have been pushed away from Ukraine’s second city, Kharkiv, while the much anticipated Donbas Offensive in eastern Ukraine has made painfully slow progress.

Putin’s most obvious option at this point would be to escalate the conflict by moving from today’s so-called “Special Military Operation” to an official declaration of war against Ukraine and full mobilization. This might help to fill growing gaps within the ranks of the Russian military, but public opposition to mobilization could also destabilize the domestic situation within Russia at a time when the Kremlin is already paranoid over possible signs of revolt. Perhaps this fear of opposition helps explain why a significant number of oligarchs and their families have died in suspicious circumstances in recent months.

Nor would mobilization necessarily produce the kind of fighting force Putin currently needs. An army full of conscripts and reservists with limited military training would be no match for Ukraine’s battle hardened and highly motivated troops armed with superior Western weapons.

Putin’s predicament is likely to worsen in the coming months, making his invasion of Ukraine even more untenable. Western sanctions will begin to have a greater impact from the end of the summer season onward as Russia’s inability to replace Western imports becomes impossible to disguise and as the savings of ordinary Russians begin to run out. Unemployment figures will likely reach record highs and economic forecasts will deteriorate as the costs of international isolation continue to mount.

Growing public awareness of the grim military situation in Ukraine will add to the gloomy mood. Based on the current rate of attrition, the Russian army will suffer 50,000 combat deaths by September. Such losses are completely unprecedented for a major power in modern warfare and cannot be entirely explained away or otherwise disguised by the Kremlin propaganda machine.

The Kremlin currently faces a series of parallel challenges as it seeks to prevent the faltering invasion of Ukraine from unravelling completely.

There are no more pressing issues than the rising number of Russian soldiers refusing to fight in Ukraine. Reports of resistance to deployment have been emerging since the early days of the war and continue to mount. Growing numbers of Russian contract soldiers have resigned from the army or simply refused to fight in Ukraine, while members of Russia’s National Guard have allegedly argued that they are legally only obliged to serve within the borders of the Russian Federation.

Other forms of protest have been more informal. Large numbers of Russian troops have simply abandoned their tanks and armored vehicles in Ukraine and fled or surrendered. This has enabled the Ukrainian military to acquire over 230 Russian tanks and earned Russia the unwelcome status of Ukraine’s number one arms supplier.

Morale among Putin’s invasion force now appears close to breaking point. Anger at incompetent officers has led to at least one incident of soldiers running over their commander. Meanwhile, the Ukrainian Security Service has intercepted numerous telephone conversations of Russian troops calling home and describing the hell they face in Ukraine and the often staggering scale of the casualties within their individual military units.

The Kremlin is particularly eager to prevent the Russian public from learning the criminal realities of the war. While some intercepted mobile telephone calls indicate Russian support for atrocities against Ukrainian civilians, it is likely that widespread awareness of war crimes committed in Ukraine would spark a highly negative response. Russian propaganda has been largely successful in demonizing Ukrainians, but the Kremlin lacks convincing excuses for the mass murder of civilians in Russian-speaking Ukrainian cities such as Mariupol and Kharkiv.

Likewise, Russian officials are having difficulty explaining how the supposedly “second most powerful army in the world” is unable to defeat a nation that Putin insists does not exist. Longstanding negative stereotypes of Ukraine as an unruly peasant province of Russia have left today’s Russian public ill-prepared for the shock of modern Ukraine’s impressive military prowess and strong national identity. After years of propaganda insisting that only a tiny minority of Ukrainian nationalists actually opposed Russia, the Kremlin finds itself forced to acknowledge that the entire Ukrainian nation, including millions of Russian-speaking Ukrainian patriots, now regards Russia as its sworn enemy.

Despite wall-to-wall pro-war propaganda, Russians are already becoming increasingly aware that the “Special Military Operation” is running into serious difficulties. A series of unexplained fires and explosions across Russia have fuelled unconfirmed rumors of Ukrainian sabotage and Special Forces operations on the home front, while military disasters such as the sinking of Russia’s Black Sea Fleet flagship The Moskva and the recent Russian defeat on the Donets River have been too big to cover up completely.

The grim realities of the war in Ukraine will be further brought home to Russian audiences as Ukraine puts more Russian soldiers on trial for committing war crimes against Ukrainian civilians. While the Kremlin will continue to deny that these crimes took place, it will be impossible to entirely block accounts of Stalinist-style mass executions and the documented rape of over 400 Ukrainian women from reaching the Russian public.

Russia’s crippling military losses and the practical limitations of a possible mobilization mean that Putin’s Ukraine war is fast becoming unwinnable against an opponent which enjoys high morale and unprecedented international support. As Ukrainian forces receive further weapons from the West and continue to launch successful counterattacks, we can expect to see the slow but steady degradation of Russian forces. Eventually, this may lead to a 1917-style collapse as morale within the Russian army continues to plummet.

The failure of his Ukrainian adventure will have disastrous domestic consequences for Putin personally. It will shatter the myth of the all-powerful dictator and lead to calls for dramatic political change within Russia. The exact nature of the ensuing crisis is impossible to predict, but it already looks highly unlikely that Putin will remain president for life.

Taras Kuzio is a Research Fellow at the Henry Jackson Society and Professor of Political Science at the National University of Kyiv Mohyla Academy. He is the author of the recently published book “Russian Nationalism and the Russian-Ukrainian War.”

Ukraine’s Eurovision victory is a soft power success story that underlines the country’s dominance over Russia on the information front while highlighting the strength of international solidary and support for Ukraine.

Image: A Ukrainian serviceman walks next to a destroyed Russian main battle tank T-90M Proryv, as Russia's attack on Ukraine continues, near the village of Staryi Saltiv in Kharkiv region, Ukraine May 9, 2022. (REUTERS/Vitalii Hnidyi)