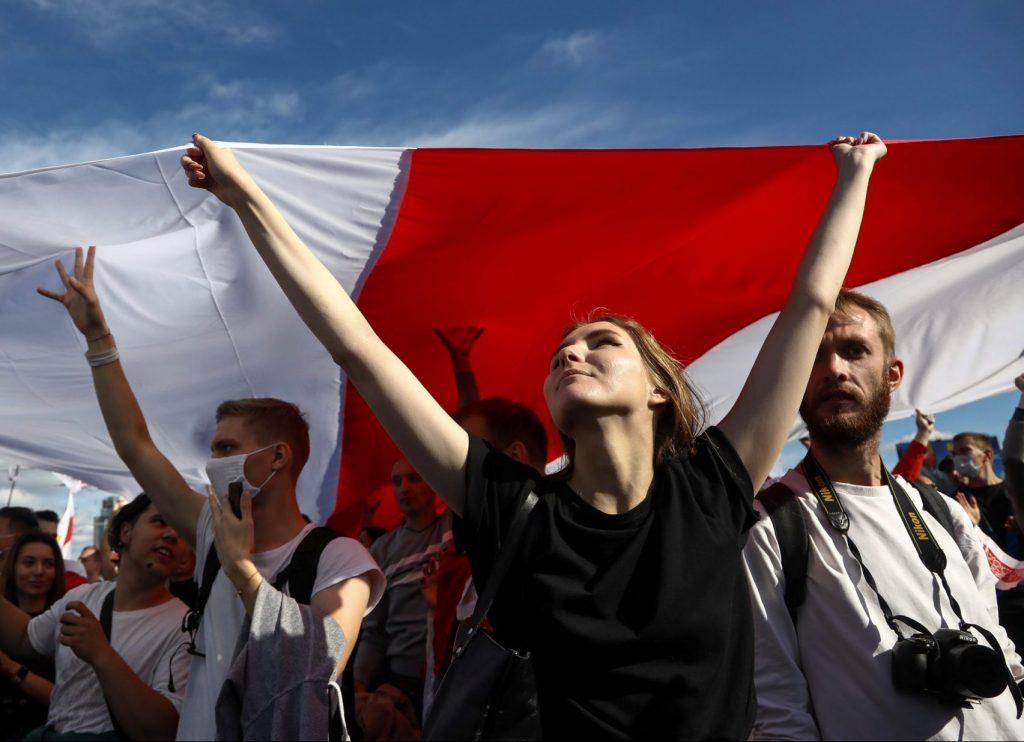 Recent events in Belarus have grabbed the attention of the watching world, but few audiences have been as attentive as in neighboring Ukraine.

The protest movement that erupted in Belarus on August 9 strikes a particularly resonant chord with Ukrainians as it brings back vivid memories of the country’s own two post-Soviet people power uprisings.

More importantly, the outcome of the protests promises to shape the regional geopolitical climate in ways that will impact directly on Ukraine’s own nation-building progress and the country’s undeclared six-year war with Russia.

From a Ukrainian perspective, the short-term outlook in Belarus does not currently look favorable.

During the initial stages of the protest movement, the 26-year regime of Belarusian dictator Alyaksandr Lukashenka seemed in real danger of collapsing. However, Russia has since intervened to keep Lukashenka in power.

This Russian intervention has been both diverse and decisive. Moscow has sent Kremlin propaganda teams to Minsk to coordinate Belarusian state media and manage Lukashenka’s information strategy. Russian loans are propping up the crisis-hit Belarusian economy. Crucially, Putin has also declared his readiness to send Russian security forces into Belarus if the protest situation gets out of control.

This has left Lukashenka almost entirely dependent on the Kremlin. He has acknowledged this in recent days with numerous public statements underlining the importance of strong ties between Minsk and Moscow. During Lukashenka’s September 14 summit meeting with Vladimir Putin in Sochi, he thanked the Russian leader for his support before declaring, “We need to stick closer to our elder brother and cooperate on all issues.”

It remains unclear exactly what this cooperation will entail.

Although the Kremlin’s plans for Belarus are still taking shape, it is reasonable to assume that deeper integration will be on the menu. This has long been Putin’s priority in his dealings with Minsk. It was the principle theme of the message Putin sent to congratulate Lukashenka on his reelection in early August. With the Belarusian leader’s position suddenly so precarious, it would be strange if Russia did not now seek to press home its advantage.

This integration could take many forms, but it is likely to include strong security and economic dimensions. Belarus’s many large Soviet-style state-owned enterprises would be key Kremlin acquisition targets, while Moscow is also expected to seek an increased military presence in the country. In a move that may foreshadow a more permanent Russian army deployment in Belarus, Putin this week confirmed plans for joint military exercises on a monthly basis throughout 2021.

From a Ukrainian perspective, this would be the most alarming immediate outcome from any deepening Belarus-Russia integration. In a worst-case scenario, it could create a significant Russian military threat along the 1000km border separating northern Ukraine from Belarus. With Ukraine’s armed forces already stretched by the ongoing conflict in eastern Ukraine and the need to maintain a strong deterrent force close to Russian-occupied Crimea, reinforcing the northern border zone would be a daunting prospect.

While the idea of escalating Russian influence in Belarus will cause alarm in Kyiv, it is also important to maintain a sense of perspective. Lukashenka may currently be more eager than usual to please the Kremlin, but he has always been a staunchly pro-Russian politician.

It was Lukashenka who ditched the Belarusian national flag and brought back the Soviet-era version. Likewise, he was the man who granted Russian the status of second national language and condemned Belarusian to relative obscurity.

While it is true that Lukashenka has not always acquiesced to the Kremlin’s integration initiatives, he was among the principle architects of the “Union State” agreement that continues to serve as the basis for deepening ties between Belarus to Russia.

The prospect of a Russian military presence in Belarus is also not entirely new, nor is it necessarily game-changing. Moscow already maintains air defense bases in the country and operates a communications facility that plays a vital role in the coordination of Russia’s nuclear submarine fleet. Meanwhile, the Kremlin has entire army groups concentrated inside Russia in the border zones close to eastern and northern Ukraine, as well as in occupied Crimea. Army bases in Belarus would enable Moscow to significantly tighten this military encirclement of Ukraine, but it would hardly be decisive.

Looking ahead, Ukraine’s bilateral relations with a Kremlin-dependent Lukashenka are likely to become increasingly strained. This deterioration is already evident. In recent weeks, the Belarusian dictator has repeatedly accused Ukraine of being among the foreign powers responsible for orchestrating the current wave of protests against his regime. On September 5, the Belarusian authorities even breached international diplomatic protocol by subjecting the Ukrainian ambassador to a border search.

With a beleaguered Lukashenka beholden to the Kremlin and eager to blame his woes on external enemies, we can expect more finger-pointing in Ukraine’s direction. This is not a welcome development. In practical terms, in means that Minsk is no longer an appropriate location for Ukraine-Russia peace talks.

However, it is important to stress that despite paying lip service to notions of Slavic fraternity, Lukashenka has never been a reliable Ukrainian ally. Indeed, ever since the Russian invasion began in 2014, Belarus has refrained from backing Ukraine in the international arena.

Dealing with an increasingly hostile and Russia-dominated Lukashenka regime is certainly not an enticing prospect for Ukraine. Nevertheless, the longer-term outlook is considerably more optimistic from a Ukrainian perspective. Putin may have succeeded in propping up his fellow dictator, but he cannot undo the national awakening that has taken place over the past few months in Belarus.

The current Belarusian pro-democracy protests are unprecedented in every sense. They are geographically spread across the nation and have managed to attract previously unheard-of crowds numbering in the hundreds of thousands.

Protesters have been exposed to successive waves of police brutality and state-sanctioned terror tactics, only to respond each time with new demonstrations of defiance and creativity. The hard line government approach has backfired disastrously, serving to galvanize protests and fuel anger among previously apolitical segments of Belarusian society. This has produced a truly national movement.

The demands of the protesters are simple: free elections and an end to the Lukashenka dictatorship. In a word, democracy.

A number of factors have contributed to the scale and resilience of the protests, including the stagnating Belarusian economy and Lukashenka’s hapless response to the coronavirus pandemic. But more than anything else, the movement reflects a generational shift from a population that is tired of living in the Soviet past and wants fundamental change. After two-and-a-half decades of dictatorship, Belarus has finally risen.

The most immediately recognizable sign of this national awakening is the prominence of Belarus’s traditional white-red-white tricolor flag, which has emerged as the main symbol of the protests. Lukashenka abandoned this flag soon after coming to power in the 1990s, but it has lingered in the national imagination.

Officially, the flag dates from Belarus’s short-lived early twentieth century statehood bid following the Russian Revolution. However, its origins can be traced back to the medieval Grand Duchy of Lithuania and Polish-Lithuanian Commonwealth, both of which included Belarus.

This places the flag beyond the Russia-centric version of Belarusian national identity favored by Moscow and endorsed by Lukashenka. Instead, it harks back to a pre-Russian period in Belarusian history and places the country firmly within the European family of nations.

This does not mean that the protests in Belarus are of a fundamentally anti-Russian nature. On the contrary, protest leaders have gone out of their way to stress their commitment to maintaining strong ties with Russia. Unfortunately, Putin has not been inclined to listen.

The Kremlin recognizes that any pro-democracy uprising in the surrounding neighborhood represents an existential threat to Russia’s own authoritarian system. Moscow is also painfully aware that sooner or later, a democratic Belarus would follow Ukraine out of the Russian orbit and turn west towards the infinitely more attractive EU.

In a very real sense, recent events in Belarus are a reminder that the Soviet collapse is still underway. After almost three decades of dictatorship, Belarusians are belatedly experiencing a wave of national unity and liberation that echoes the historic developments of the late 1980s and early 1990s in Central Europe.

The shared experience of the recent protests is already shaping attitudes towards national identity among millions of Belarusians and transforming how the country sees itself. No amount of Russian money or Kremlin muscle can reverse this process.

Despite the historic changes taking place in Belarusian society, there is currently no end in sight to the crisis. With Russian backing, Lukashenka may be able to cling onto power for many more months or even years. This will prolong the suffering of the Belarusian people while also significantly complicating life for Ukraine. Nevertheless, there is now a growing sense of historical inevitability about the final outcome of the confrontation.

Belarus has emerged from its post-Soviet slumber and has set out on the road to democracy. This is good news for the Belarusians themselves. It is also a very welcome development for Ukraine and Europe as a whole, with the potential to reinvigorate the relationship between Brussels and the EU’s entire eastern neighborhood. Ultimately, the only losers will be authoritarian Russia and those who hitched their futures to the sinking ship of the Lukashenka regime.

Solomiia Bobrovska is a Ukrainian MP for the Holos party.

The EU’s “grave concern” will not help Belarus

The Belarus crisis has exposed the EU’s foreign policy limitations, but a tougher European Union response could still succeed in bringing Belarusian dictator Alyaksandr Lukashenka to the negotiating table.

Image: Belarusians carry the country's historic white-red-white flag as they take part in a pro-democracy rally in Minsk on September 13. (Tut.By via REUTERS)