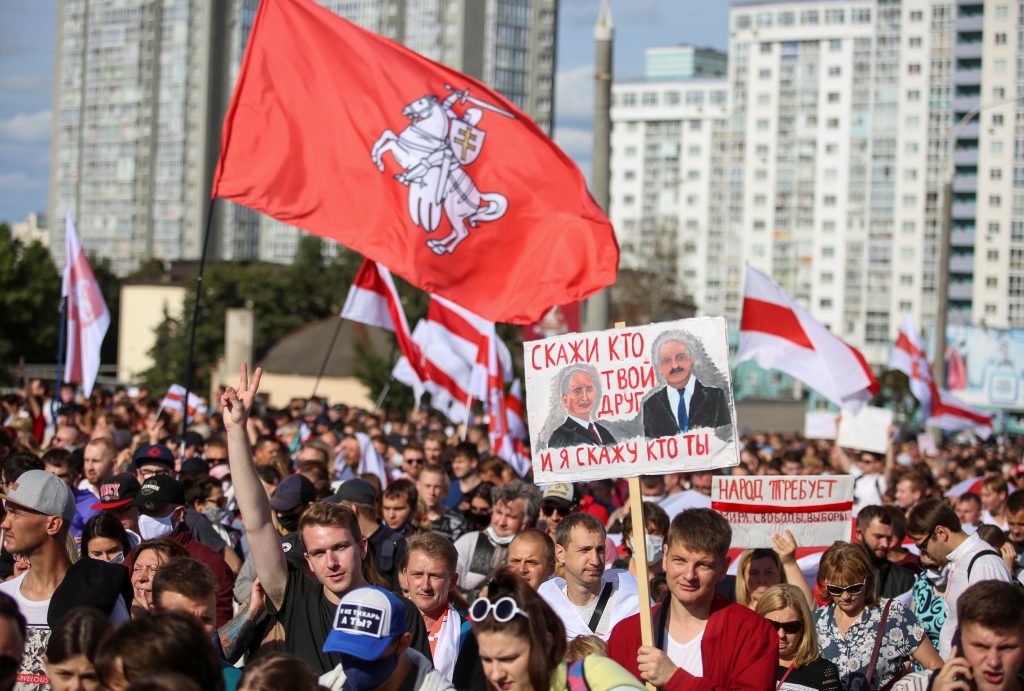 As the brutal crackdown on Belarusian pro-democracy protests enters its second month, Cyprus is delaying the introduction of EU sanctions against the Lukashenka regime in Minsk. EU foreign ministers backed sanctions measures including visa bans and asset freezes during a Berlin meeting in late August, but in recent days the move has been stalled by a temporary Cypriot veto. Nicosia is accused of seeking to link the EU’s Belarus response to sanctions against Turkey over a territorial dispute in the eastern Mediterranean.

This delay underlines the lack of urgency that has characterized the underwhelming EU response to the escalating government crackdown on pro-democracy protests in Belarus.

Nor are the proposed measures to everyone’s liking. Critics argue that even if implemented, the sanctions targeting around 30 Belarus government officials are insufficient to force a rethink in Minsk. Speaking to the Financial Times on September 6, Lithuanian Foreign Minister Linas Linkevicius warned that inaction over Belarus undermined the EU’s foreign policy credibility. “The Belarusian people should not feel deserted,” he stated.

Unfortunately, the European Union’s hesitant response to the crisis has indeed left many Belarusians feeling that they are on their own. While there have been the traditional expressions of “grave concern” from numerous European capitals, officials from a number of major EU member states including France, Germany, and Italy have also reportedly argued against targeting the Belarus dictator directly, claiming instead that channels of communication with Lukashenka must be kept open.

Such thinking suggests a failure to grasp the nature of the dictatorship in Belarus. Any communication with Lukashenka requires a common language, and the only language he understands is the language of power.

For now, there is little indication that Lukashenka is taking the possibility of crippling EU sanctions seriously. Far from it, in fact. During a recent interview with the Russian media, he mocked the Baltic states as “obedient dogs” for imposing their own sanctions on Belarus, while claiming that major European powers “do not want to quarrel with us.”

Despite his penchant for bluster and buffoonery, Lukashenka should not be underestimated. He is a wily veteran who had until recently managed to maintain a remarkable geopolitical balancing act between Russia and the EU. He has been dealing with Brussels for over two-and-a-half decades and has seen generations of European politicians come and go.

Based on his own prior experience, the Belarusian dictator now seems confident that the EU will stop short of imposing the kind of sanctions capable of causing serious economic pain or otherwise undermining his grip on the country. This confidence is helping to shape Lukashenka’s defiant and uncompromising response to the protests in Belarus.

Despite the lack of EU support, there is no sign of the pro-democracy uprising in Belarus losing momentum. On September 13, over one hundred thousand Belarusians joined a protest rally in central Minsk, while smaller events also took place in towns and cities across the country. Similar anti-regime rallies have now been staged on five consecutive weekends.

The current wave of protests began just over one month ago on August 9 in response to a presidential election that was marred by the imprisonment of various opposition candidates and large-scale vote rigging.

The Belarusian security forces initially adopted an extremely heavy-handed approach to the protests in an apparent attempt to intimidate the public and crush dissent. However, this tactic backfired disastrously, with widespread anger over police brutality galvanizing opposition to the Lukashenka regime.

According to Belarusian human rights center Viasna, over 10,000 people have been detained by the security forces since protests began, with more than 600 complaints registered relating to the abuse of detainees. So far, five deaths have officially been confirmed, with dozens of people still unaccounted for.

Meanwhile, numerous victims have provided graphic accounts and physical evidence of torture used against protesters. This has radicalized many previously apolitical Belarusians and makes it difficult to imagine a return to the old status quo that had existed prior to this summer’s presidential election campaign.

A more forceful EU approach to Belarus may help to curb the violence against protesters. It could also realistically contribute to a transition away from the current dictatorship.

In order to be effective, EU sanctions would need to be far more extensive than the currently envisaged measures. Instead of targeting a few dozen officials, Brussels should be looking to add hundreds of names to sanctions lists. This should include those involved in both the falsification of the presidential election and the subsequent crackdown against protesters.

A broader sanctions policy would give members of the security services and a wide range of other government officials pause to consider their role in the crimes of the regime. Many senior officials have business interests or property in the EU. They regularly spend their vacations in Europe and typically prefer Paris and Amsterdam to Moscow and Omsk. The prospect of travel bans and bank account freezes would have a considerable deterrent effect and may lead to more defections from the regime as officials recognize the very real costs of remaining loyal to Lukashenka.

The danger of regime defections is something the Belarusian dictator appears to take extremely seriously. He has held a number of meetings with national security officials in recent weeks, during which he has stressed the need for loyalty and underlined his determination to fight on.

Lukashenka has been strengthened in his resolve by increasingly overt Russian backing, with Moscow providing emergency financing along with teams of Kremlin propagandists to lead his information strategy. Crucially, Putin has also promised to send Russian security forces into Belarus to prop up the regime if necessary. This Russian support makes defections less likely, but tougher EU sanctions could still cause many regime insiders to reconsider their positions.

Ultimately, sanctions alone cannot solve the crisis. Dialog with Lukashenka is essential, and the EU should be looking to play a leading role in this process. However, it is simply incorrect to claim that robust sanctions will ruin any chance of productive engagement. On the contrary, it may be the only way to make Lukashenka sit up and listen.

The Belarusian dictator’s current lack of concern about the EU is entirely rational. He has seen how previous EU sanctions measures, particularly those imposed after Belarus’s flawed 2010 presidential vote, have been relatively easy to bypass. He is confident that today’s European leaders have no appetite for a prolonged geopolitical confrontation.

Only a dramatic increase in the scope of the sanctions imposed against his regime will convince him otherwise. This is the kind of strength Lukashenka respects, and it is far more likely to bring him to the negotiating table than the current policies of misguided moderation.

Image: Belarusian dictator Alyaksandr Lukashenka is currently facing an unprecedented wave of pro-democracy protests. He has been bolstered by strong backing from Russia, while the EU response to the crisis has been muted. (Tut.By via REUTERS)